Stevie Wonder, Mary J. Blige and Kem have all been booked to sing at weddings at some point in their careers. So why are professional wedding singers often stigmatized when it comes to being taken seriously as original recording artists? It's a question that Dannis Winston is aware of but he's not concerned. The 27 year-old bandleader, singer/songwriter and President/CEO of Winston's Crew Collective is focused on parlaying his successful eight-year wedding band career (voted one of New York Magazine's Top 100) to a solo run in the mainstream music industry.

This Friday he is set to release his debut single, "Let Me Go," on iTunes, Spotify and Soundcloud. Plus he will perform at a special brunch at The Cecil in Harlem on Sunday, January 17.

Get to know one of the wedding industry's most popular talents and check out our list of other performers that challenge the wedding singer stigma. 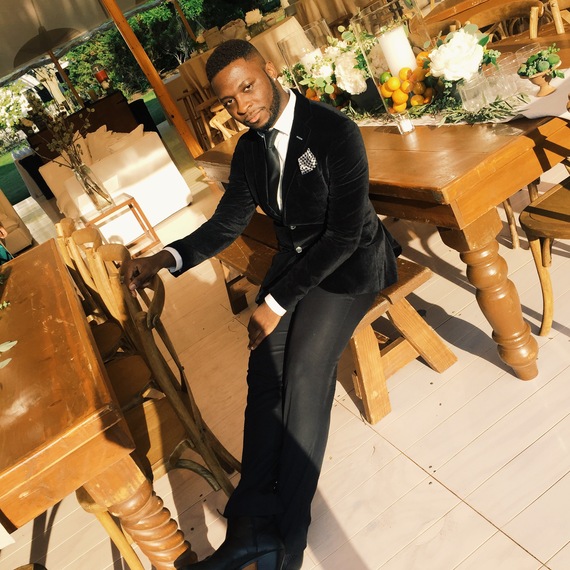 On getting his start in church and moving into the wedding industry:

"The first band I ever had was as choir director in my church. I didn't realize how big a deal that was at 12 to conduct a 50 person mass gospel choir of adults and children. I then moved onto pursuing my solo career. I was like every other singer trying to make music happen. I realized there was not enough money in that. I decided to audition for the top wedding companies in New York and I got into most of the ones I wanted.

On how performing at weddings influenced his sound:

"The wedding industry helped me as an original artist because of diversity. You have to move with what the client wants. If they want David Bowie and Lady Gaga you have to be malleable to that. So weddings helped me stay diverse, current and knowledgeable on the history of music. The sound on my EP is Afro House meets R&B. It is about a universal R&B sound."

On the most surprising wedding songs of today:

"What's really popular as a wedding band is 'Hotline Bling' by Drake. It is weird to play on the dancefloor because of the tempo. I wouldn't think most would rock to it but they do. It is like when Adele came out with 'Someone Like You.' I thought nobody would want to hear that at a wedding but they did."

On the stigma of being in a wedding band:

"There is a stigma but I didn't come from that world. I was from the original music world. When I came to weddings I made it a point to stand out. With my first agency we fought about them not doing anything on the radio. I had a residency in New York at Toshi's Living Room where we did what was on the radio and I always kept my band immersed in what was on the street. In the wedding industry that has given us a leg up. Now a lot of bands do modern music but it wasn't like that five years ago. I am still doing wedding bands and my music. The ultimate goal is for everyone to consider me a bandleader, vocalist and producer so that whatever I do it always involves orchestration. The weddings will always be there."

Dannis Winston isn't the only wedding singer making moves within and outside the industry. Check out a few others who are disproving the idea of wedding singers/DJ's as solely niche entertainment.

DJ Cassidy played at one of the most buzzed about pop culture weddings in recent memory: Jay Z and Beyoncé. Outside of that he's known for wearing his signature boat hat and collaborating with the likes of Chromeo, John Legend and Robin Thicke. In between working on original music and DJ'ing at numerous special events around the world he still finds time to play weddings. But with his credentials the booking fee is sure to be on the high-end.

This Harlem native is known as much for his sound as his look. Wellington embraces dandy fashion--after all it's his first name--with sartorial choices that are all about the details from stitching to colors to subtle accessories. Musically, he is vocalist of Dandy Wellington and His Band, which wears their jazz influence on a perfectly pressed sleeve. Wellington performs at weddings for those seeking a throwback element and his other clients include Red Bull Space and Vigoss Denim. In 2015 he released his debut EP Harlem Rhythm.

Barnes fuses jazz with a dash of soul during her performances. After studying jazz, classical voice and musical theatre in high school and college she hit the jazz circuit. Gigs have included WBGO 83.3 FM and the New Jersey Performing Arts Center (NJPAC). She performs at weddings but isn't letting that stop her original music pursuits. Her album, Lovejourney is available here.