Nearly 12 years ago, Sage Gallon was just getting clean after a decade of smoking crack. He's now reliving those days of substance abuse but this time as a photographer. In his photographic essay, "Crack(s)" Gallon presents Baby Dee, a man in his mid-30s and in the throes of drug abuse. The raw images were taken last January over the course of 45 minutes at a Los Angeles motel. Baby Dee is depicted in different phases from actual crack use to quiet moments of apparent self-reflection and despair. 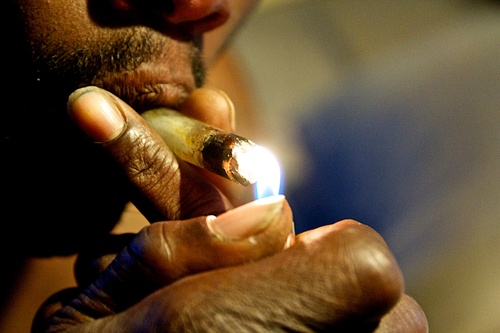 "When I was living on the streets, homeless, dirty and empty I remember how people would look at me," recalled Gallon. "I remember the looks of disdain, as though I was being stripped of my humanity. With this series I want the audience to not only see his [Baby Dee] pain, his isolation and his addiction but I want the audience to also see his beauty and his humanity."

Shortly after the shoot, Gallon showed Baby Dee the images and recounts that the latter was nearly brought to tears. Gallon then dropped him off at a gas station and has not heard from him since. But even if the series does not save Baby Dee from his addiction, Gallon hopes that his photos will contribute to ongoing calls to reform drug policy in the U.S. The federal War on Drugs costs an annual amount of $51 billion, has contributed to the U.S. having the highest incarceration rate in the world of over 2 million people and two-thirds of those incarcerated for a drug offense in state prison are black or Hispanic.

"With the prison industrial complex there is more profit to imprison people for drug use or possession instead of giving them treatment. This takes an addict and hardens them. We should be focused more on declaring a war against poverty and hopelessness than drugs. We really have to start putting people over profit," said Gallon.

Drugs aren't the only addictions focused on in Joseph Cavalieri's exhibition, Deliver Us From Our Addictions, which runs from January 7 to February 13 at The Church of St. Paul the Apostle in New York City. Curated by Joyce Yamada for Openings NY, the exhibition takes a witty and meditative look at addictions ranging from consumerism to plastic surgery to overeating. For the project, Cavalieri had one month to create ten stained glass works. And while some may not think of a church as the first place to hold such an exhibition, Cavalieri found the location to be just the right match. 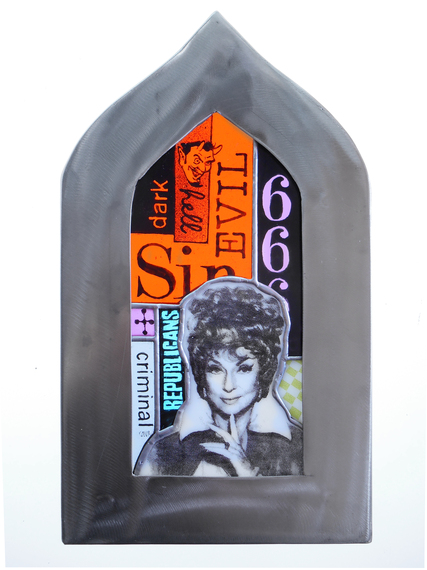 "This series is shown in a church but I purposely didn't want to limit the list of addictions to the cliché religious issues one first thinks of like 'sin.' My choices in this series draw from modern day issues," he said. "As with my past work I've placed some humorous elements in the design basically to say, 'don't stress, we are all only human.' I'd like contemplation from the viewer on which of these addictions they may have, which I hope will lead to understanding."

Award-winning producer/playwright, Patrick Blake is hoping that the Broadway community will understand his vision of a hip-hop theater company named, Rhymes Over Beats. The company launched late last year as a hub for hip-hop artists, producers, writers, DJs and enthusiasts to create works that merge hip-hop and theater. While there have been numerous hip-hop theater productions, Blake and others in the field note that there hasn't been a widespread mainstream embrace of the form, especially on Broadway.

"Theater is a traditional and old-fashioned place and it takes forever for anything new to be embraced. But musical theater thrives and grows when the music it's written in is the popular music of the day and today that would be hip-hop. If somebody doesn't do something to change that you will end up with theater being opera," predicted Blake.

To prevent that scenario from happening Blake has enlisted rapper Maino to star in Freedom, a hip-hop musical about unjust incarceration that will be the forthcoming debut from Rhymes Over Beats. Already, Blake has secured about a quarter of the $1 million he needs for production, but his main challenge is securing additional investors. He's confident that hip-hop stars -- those largely ignored by the theater world -- will buy into his vision and help reinvent theater.

"It's impossible to convince regular theater investors to invest in a hip-hop musical," he said. "I am gradually appealing to people in the hip-hop music industry to invest in a show that will also increase their ability to make money. Convincing someone to take a risk is one person at a time. The more individuals I can sit with and tell what I am doing, the better it is."