While the jazz-fueled heyday of the Harlem Renaissance era has long since played its last note, there are a few places in the historic 'Black Mecca' that continue to honor its legacy amid rapid gentrification. For the past 15 years photographer Ruben Natal-San Miguel has been documenting New York City's ever-changing neighborhoods with the intent of celebrating businesses and individuals who define its roots and culture.

One such place includes Paris Blues Bar. In 1969, when Samuel Hargress opened the bar Harlem was plagued by drugs and crime. With live music, drinks and the kind of cozy no-frills setting that lends an authentic rustic vibe, Paris Blues Bar is now a popular tourist destination. It is one of the few of its kind still standing (along with Showmans Jazz Club and a revived Minton's).

San Miguel, who moved to Harlem in 2003, hopes his portraits of the people at Paris Blues Bar remind others of the value of maintaining a community's cultural identity.

"These sorts of places and people are fading away in New York with aggressive gentrification," he said. "If people just want to upgrade the neighborhoods in their own minds then you will lose a fabric of community. It is important to give people a voice to be heard and celebrated and my work does that."

Now we are letting San Miguel's work speak for itself, literally. In their own words three of Paris Blues Bar's popular personalities reflect on their portraits and share tales of sacrificing to make one's dream a reality, fighting back against racism and the personal freedom found through style. 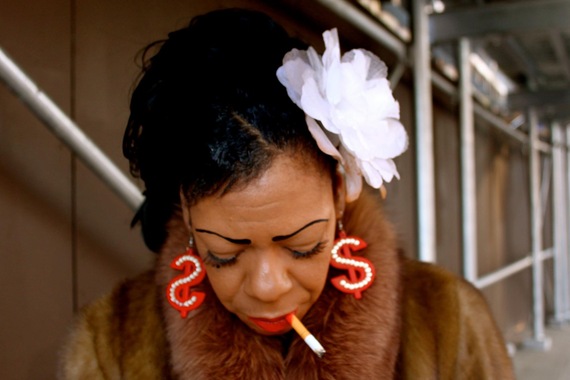 "I been through hell and back and had abusive men in my life. Living in Brooklyn I saw too much crime and murder. I had two kids when I came to Harlem in 1998. I moved here to make a dream come true. I wanted to come to Harlem to sing at the Apollo Theater and all the jazz clubs. I have been performing in Harlem since 2002 and at Paris Blues since about 2010 or 2011. I got my start when a writer from The Harlem Times drove me to the Cotton Club. I introduced myself to the bandleader and they let me sing, 'Summertime.' I kept coming back there every Monday. I would sit and wait until they called me on. After the first two years my boss started to pay me. I didn't care if I had carfare or no money. I was determined to sing there. And these days I'm more popular than ever. Harlem is now my heaven." 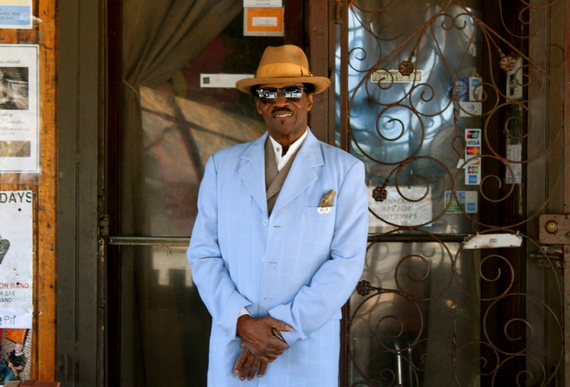 "I am from Alabama and it is one of the most racist places on the earth. In Alabama you never got anything easy and you had to get things on your own. So growing up I was around everybody who worked for themselves. It was embedded in me to get something of your own and work it yourself. I was in the army from 1959 to 1962 and stationed in North Carolina. When I left the army I moved to New York City. I got a job working in a bar for five or six years. At that time Jewish people was selling everything in Harlem. The neighborhood was way bad but I decided to buy the building where Paris Blues Bar is now. That was my opportunity and I took it. In my photograph I am standing in the doorway and it is one of the proudest moments in my life. We came a long ways from cotton fields and discrimination. We survived and are still here. That's why I still go to work every day at Paris Blues." 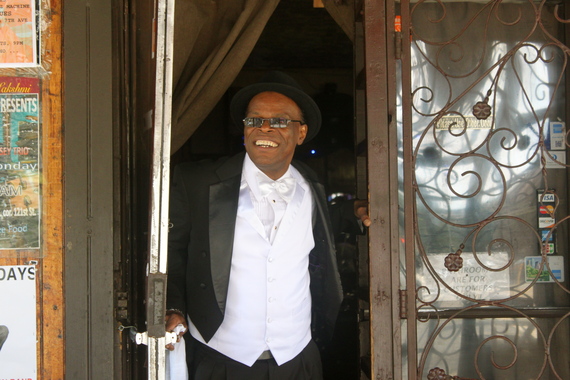 "Some call me a dandy. I like clothes and that throwback style of the 1940s and 1950s. I was influenced by black-and-white movies even though they didn't have many African-American characters. Growing up I would go to school in dress slacks and a sports coat. My Sunday clothes became my school clothes. I was teased every day. It didn't deter the way I dressed. There was a time in Harlem's heyday when black men used to dress like that and older generations appreciate it. The younger people don't disparage it but I am an enigma to them. I have never been a person to follow a trend or style. There are those of us who maintain an identity so that we don't have to bite off others or follow a trend. To me that is real style."