Since one of the earliest known buttons found at Mohenjo Daro in the Indus Valley (now Pakistan) nearly 5000 years ago, buttons have gone from being ornaments to signifiers of economic and social status to commonplace mass produced objects. Now they are being presented as visual art in the new exhibition, The Button Show, which opens this Thursday, January 21, 6-8 pm at Rush Arts Gallery in Chelsea.

Presented by Rush Philanthropic Arts Foundation (co-founded by Russell, Danny and Joseph "Rev. Run" Simmons) and curated by Souleo of Souleo Enterprises, the exhibition features clothing buttons reimagined and repurposed in contemporary art. On display until March 12 are the works of 11 artists who each work with buttons either as the dominant medium or a featured element in their sculpture, photography and wearable artworks. Participating artists include veteran 'button artists' Amalia K. Amaki, Beau McCall and Lisa Kokin along with Alexis Garrett Stodghill, André St. Clair, Camilla Taylor, Hannah Battershell, Io Palmer, Petros Chrisostomou, Ruben Natal-San Miguel and Tavet Gillson. [Full disclosure: writer serves as curator of the exhibition].

"We are excited to present this exhibition as it relates to our mission of highlighting emerging artists and curators whose work is underrepresented in the commercial art field. The visual art presented here is an opportunity to highlight a medium that has not been fully recognized for its artistic value," said gallery director Charlotte Mouquin.

An early noticeable trace of buttons in modern art is Ernst Ludwig Kirchner's "Woman Buttoning Her Shoe (Frau, Schuh zuknöpfend)" created in 1912. Although the work doesn't list buttons as a medium the woodcut piece's title highlights the central element buttons play in the work. In 1915 Olga Rozanova created "Zaumnaia gniga (Transrational Boog)," an artist book that includes a collage with a physical button. And in 1947 Jackson Pollock produced "Full Fathom Five", which includes buttons as part of its listed materials. Since then numerous other artists have used buttons in their contemporary art such as Nick Cave, Ran Hwang and Gregory "Mr. Imagination" Warmack.

The artists in "The Button Show" extend this artistic production in buttons and we've got highlights with artist statements below. 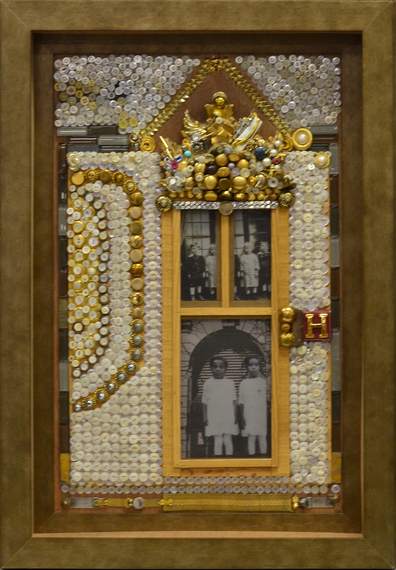 "Latch Key" is informed by numerous issues that relate to childhood experiences and processes of socialization. Buttons contribute to notions of simplicity and common life while also providing surface properties that reflect the complexities of family and youth. Buttons are playful materials that have been primary or important components in my work for more than twenty years. 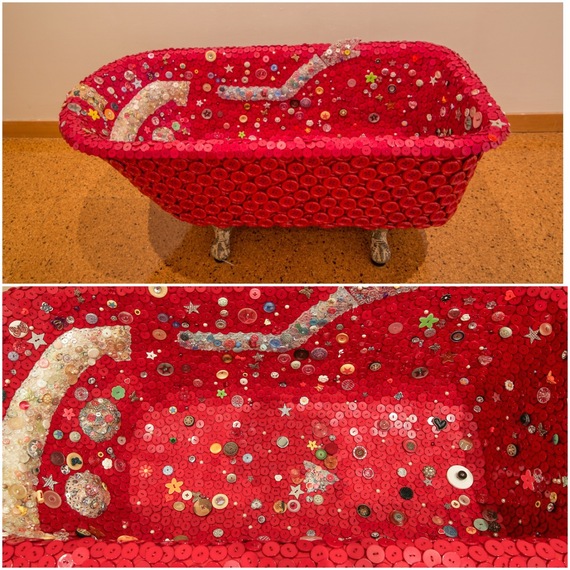 "darkmuskoilegyptiancrystals&floridawater/redpotionno.1," is inspired by the poem "one" from Ntozake Shange's choreopoem for colored girls who have considered suicide / when the rainbow is enuf. I depict the climax of the poem when lady in red, after giving herself to a lover, prepares a bath to wash away his scent. Thereby, the bathtub becomes a spiritual and ritualistic sanctuary and site of one's search for inner peace and self-love. 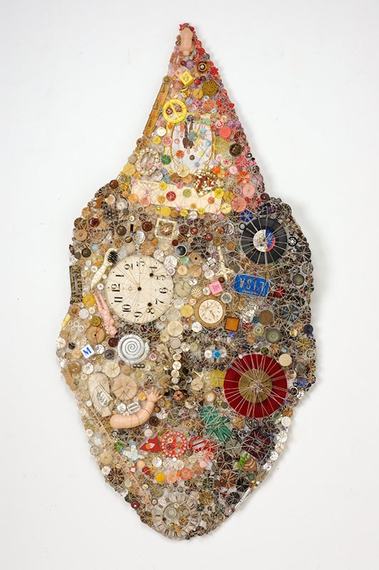 "Party Hat Diabolique" uses as its source material a photo of my fifth birthday party in which I am looking at the camera with a characteristic melancholy look, wearing a cone-shaped party hat slightly askew. 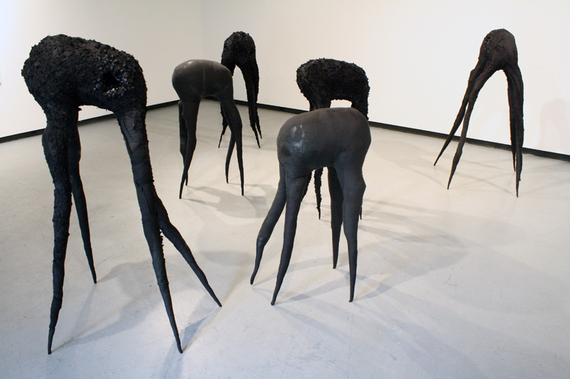 I wanted to make a piece that didn't have a face at all, but still was able to garner someone's empathy and reaction. These figures have no heads, and don't look human, but I feel protective towards them. The holes in them, I call them wounds, make them vulnerable, offer the viewer a look into their inner life. I think of them as having come a long distance undergone something terrible to arrive where they are, and now they have the scars from that journey. 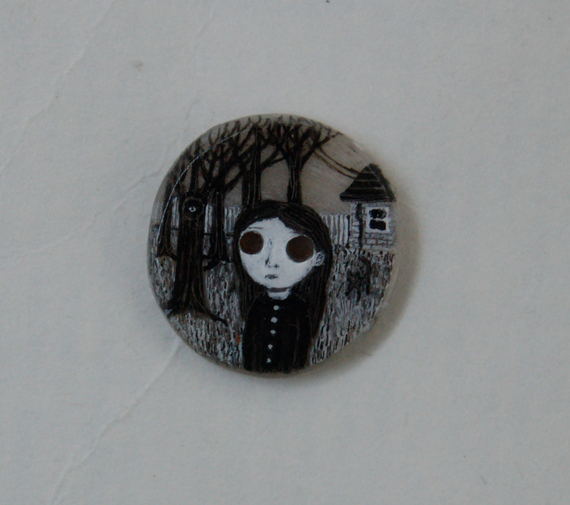 My work is always small in scale and often incorporates items that might be seen as everyday or even throwaway. I am fascinated by the alluring 'lostness' of found objects. In this series of works the holes of buttons become ghostly eyes staring out of tiny portraits, a small, forgotten thing becoming a window into, if you look close enough, a story in miniature. 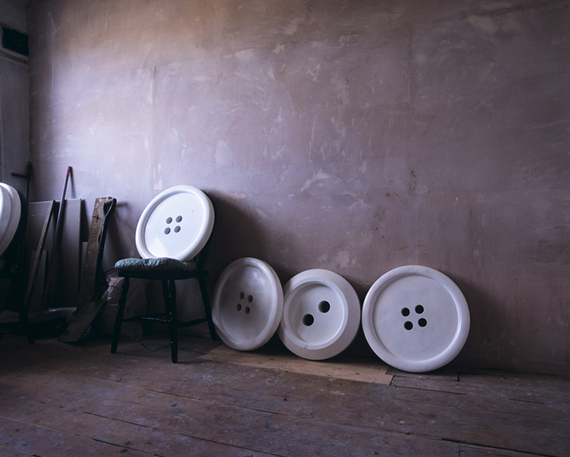 I construct both hybrid spaces and large-scale sculptures. The work as much sculptural as photographic, draws inspiration from concepts of hyperreality. These works not only revel in signs and symbols - the simulacra of contemporary life, they transcend the postmodernist trope of the simulacrum, offering distinct traces of skewed realities of the Dadaists or fantasies of the Surrealists. 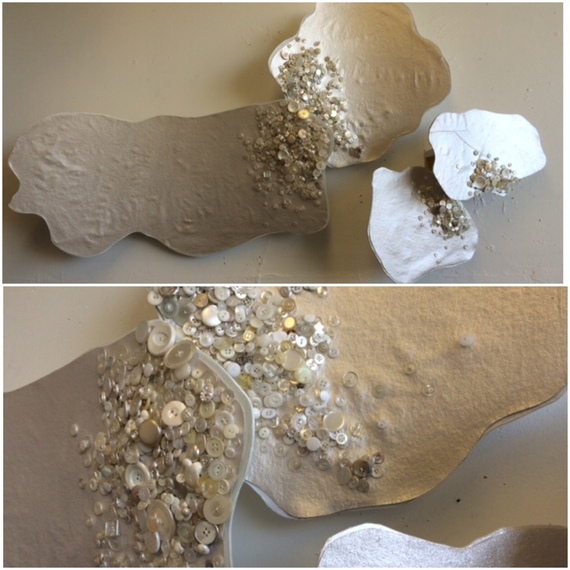 "Buttoned Up Cloud" represents the 2300-mile journey between my small, rural hometown in eastern Washington to an equally small suburb in western Pennsylvania. To document my travels- I chose the lowly and humble white plastic button and paired it with the ephemeral ever-changing cloud image. Stopping in small town thrift stores and antique shops along the way, the white button became the dot that traced this voyage.