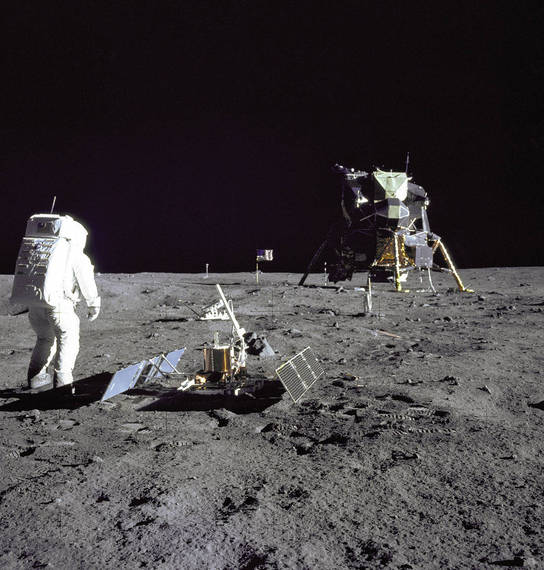 On July 20, 1969, Neil Armstrong and Buzz Aldrin landed on the Moon. Six hours later, on July 21, they stepped out onto the lunar surface, the first humans to do such a thing.

Carrying the Fire by Michael Collins, the Apollo 11 astronaut who circled the Moon alone while Armstrong and Aldrin walked on the lunar surface:

Far from feeling lonely or abandoned, I feel very much part of what is taking place on the lunar surface. I know that I would be a liar or a fool if I said that I have the best of the three Apollo 11 seats, but I can say with truth and equanimity that I am perfectly satisfied with the one I have. This venture has been structured for three men, and I consider my third to be as necessary as either of the other two.

I don't mean to deny a feeling of solitude. It is there, reinforced by the fact that radio contact with the earth abruptly cuts off at the instant I disappear behind the moon. I am alone now, truly alone, and absolutely isolated from any known life. I am it. If a count were taken, the score would be three billion plus two over on the other side of the moon, and one plus God only knows what on this side. I feel this powerfully -- not as fear or loneliness -- but as awareness, anticipation, satisfaction, confidence, almost exultation. I like the feeling.

Moonwalker by Charlie Duke, CapCom for Apollo 11 & crew on Apollo 16:

"Roger Tranquility. We copy you on the ground. You've got a bunch of guys about to turn blue! We're breathing again! Thanks a lot!" I sank back into my chair, looked at Deke [Slayton] -- we were grinning from ear to ear. This was my greatest experience, until I had the opportunity to land on the moon myself almost three years later.
[...]
The enormity of the achievement hit me later when I began to reflect that this feat had occurred less than ten years after the first man had gone to space. It was a tremendous accomplishment and the culmination of years of planning and training and managing. All of us felt a great sense of pride and fulfillment to have been part of this flight. Everyone was popping their buttons, our chests were so swelled with pride.

The magnificent desolation of the moon was no longer a stranger to mankind. We came to experience firsthand the utter desolation of the orb's lifeless terrain. In contrast, the achievement realized by scientific enterprise and teamwork in designing and engineering the rockets that could send two men to land on the moon was magnificent. I could not help marveling that the very first footsteps we had taken, and the footprints we had left on the moon's surface, would remain undisturbed for millions of years to come.

President Nixon on the phone call to the Moon:

I just can't tell you how proud we all are of what you have done. For every American this has to be the proudest day of our lives, and for people all over the world I am sure that they, too, join with Americans in recognizing what an immense feat this is.

Now in my late forties, I wasn't yet three years old when Apollo 11 made it to the Moon on July 20, 1969. My mother had plunked me in front of the family television set in the den that would become my bedroom a few years later. I sat in the middle of the carpeted floor, with my parents, one of them cradling my brother, surely behind me on the green upholstered couch, to watch the event along with an estimated 500 million other viewers worldwide that Sunday. Somehow, I knew that the hazy black-and-white images of two men in gleaming spacesuits were important. There were people inside those bulky, bouncing spacesuits; I listened to their crackling voices. The Moon seemed a place I might visit someday. Upon that image of the Moon landing, everything I have experienced and know has been built.