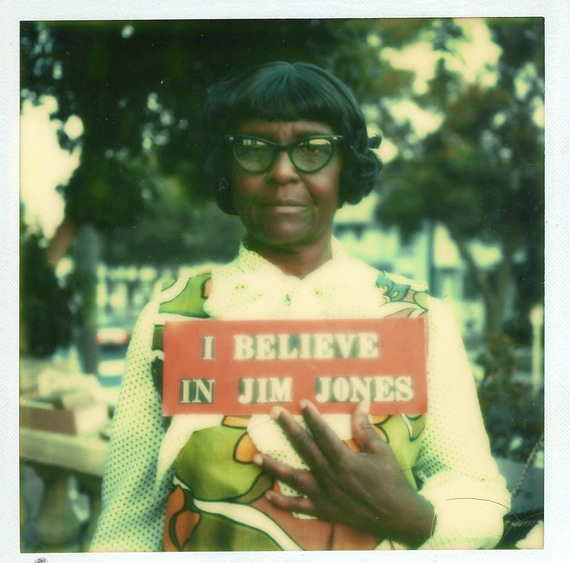 They didn't "drink the Kool Aid." They came from all over the United States--black teachers from Los Angeles, white Pentecostals from Indianapolis, black Southern transplants at the tail end of the Great Migration, Vietnam vets and ex-hippies from San Francisco. Mostly though, they were African Americans of all backgrounds, ages, sexual orientations and political persuasions, bound by family, spouses and soulmates, seduced by the collective vision of racial utopia and adventure embodied by an activist church called Peoples Temple.

On November 18, 1978, nine hundred and nine Peoples Temple members (including over three hundred children) lay dead in the Jonestown, Guyana jungle settlement named after the church's white founder, the Reverend Jim Jones. After a night of terror, spurred by an investigative tour led by U.S. Congressman Leo Ryan, members died from a lethal cocktail of cyanide and Flavor Aid; some by choice, some by force. Nearly fifty percent of Jonestown's dead were black women.

As the largest murder-suicide in American history, the Jonestown massacre has become an indelible part of cultural myth, shorthand for blind faith and a cautionary tale about religious obsession. The graphic sprawl of the Jonestown victims' bodies, notoriously memorialized in photos that sent shockwaves across the world, is marked as grotesquely "other", parodied in crude pop culture jokes and lore. But hidden beneath the psycho cult clichés is the power of black women in the Peoples Temple movement. As the largest demographic in Peoples Temple, black women have seldom been portrayed as lead protagonists in popular representations of Jonestown. Despite the horror of Jonestown's demise its representation cannot be separated from dehumanizing cultural representations of black people in general and black women in particular. While Jonestown as cultural "artifact" is perversely sexy--the object of near necrophilic projection and fantasy--Peoples Temple is a historical stepchild; its legacy an unwelcome reflection of the race, gender and class divide in "New Jim Crow" America. The inequitable conditions that compelled black women to commit their lives to the church and its mission are still relevant today.

Founded by Jones in Indianapolis in the 1950s, Peoples Temple was initially a Pentecostal congregation. Early on, Jones actively recruited African American parishioners, arousing the ire of the white Indianapolis religious establishment. African Americans played a key role in the church's growth as a social welfare provider for the poor, elderly and indigent. Jones' social gospel message dovetailed with that of the civil rights movement, attracting elderly black women members like sisters Zipporah and Hyacinth Thrash (the only survivor left at Jonestown the morning after the massacre). Through their wages, Social Security benefits and property, black women provided the economic base of Peoples Temple, as well as Jonestown.

Yet, although there have been numerous portrayals of PT's shrewd politicking, the racial politics of gender in the movement have gotten relatively short shrift. In my new novel White Nights, Black Paradise, Peoples Temple is not only symbolic of progressive black social gospel traditions but of a racially divided secular women's movement. It is no secret that white women called the shots in Peoples Temple and that their leadership was resented by some of the black rank and file. The movement's veneer of interracial "sisterhood" was compromised by the reality of white female paternalism. Survivor Leslie Wagner-Wilson alludes to these tensions in her book, Slavery of Faith. And in White Nights, Black Paradise black women's suspicion of white women's dominance is symptomatic of the racial fault lines in second wave feminism. As with the power struggles of the women's suffrage era, the largely white middle class leadership of the women's movement (represented by groups like the National Organization for Women) was willfully ignorant of if not downright hostile to the intersectional experiences of women of color. At the core of second wave white feminist ideology was Betty Friedan's Feminine Mystique, a text which universalized the experiences of white middle class women pushing back against the narrow confines of domesticity, marriage and motherhood.

While revelatory for many white women, the Feminine Mystique didn't address the realities of women of color who not only had to work but often served as maids and domestics in white women's homes. Unspoken in white women's critiques of gender and power in the home and workplace was the fact that postwar wealth massively advantaged white families. New Deal institutions like the Federal Housing Administration, the GI Bill and the Veterans Administration agency allowed working class and "ethnic" whites to move from inner cities or working class suburbs into more affluent suburban subdivisions protected from the dark other. Further, while suburban white women took advantage of job opportunities opened up by the Civil Rights Bill of 1964, black women were shut out. This fact was compounded by redlining policies which excluded blacks from buying homes in suburban communities with greater access to white collar jobs. As a result, when it came to equitable access to homeownership and professional jobs, black women were only nominally more "liberated" in the Promised Land than they were under Jim Crow.

In both Los Angeles and San Francisco African Americans of all classes were tightly confined to working class black neighborhoods in South L.A., the Western Addition/Fillmore and Bay Point. White privilege conferred the white women in Peoples Temple with mobility, prestige and decision-making power over their black female counterparts.

But if Peoples Temple was a political force, it was partly due to black women's investment in it as an alternative to the staid conservatism of the Black Church.

According to a 2012 Kaiser Foundation/Washington Post poll, black women are among the most steadfastly religious groups in the nation. Only 2% said that being religious was not important to them at all (compared to 15% of white men), while 74% said that it was extremely important. Numerous surveys have touted the decline of American religiosity within the past decade. Yet, in an era of black economic depression, the need to be devout or churched up has not diminished for most African American women, despite the patriarchal, heterosexist orientation of the Black Church.

Peoples Temple reflected this duality. When former Los Angeles member Juanell Smart joined in the early seventies, she "had given up on religion and ministers". Disillusioned with the moral hypocrisy of some churches, Jones' criticism of abusive relationships resonated with her. For Smart, Thrash, Wagner and others who followed family members into the church, Peoples Temple provided a bridge between the radical politics of the Black Power movement and the waning civil rights focus of the Black Church. The Temple forged strategic, if wary, relationships with the Nation of Islam (most notably at a 1976 Los Angeles event attended by then Mayor Tom Bradley and Angela Davis), the Black Panthers and progressive black churches. African American members felt validated by its high profile organizing around affirmative action, affordable housing, police brutality, South African apartheid and the odious 1978 Briggs Initiative, which would have denied gays and lesbians the right to teach in California public schools.

However, the Temple's pro-black activism disguised a power structure largely comprised of white women fatally loyal to Jones, who loved to proclaim his "blackness" while playing the white savior. As the church grew more regimented and authoritarian, they became his henchwomen, sexual partners and enforcers. Hit by multiple allegations of abuse and fraud in the late seventies, Peoples Temple uprooted for Jonestown.

The Jonestown settlement in the Afro-Indian nation of Guyana was intended to be an antidote to these "persecutions", a self-sufficient commune and "Promised Land" free of racism. For black Temple members who'd sought refuge from Southern Jim Crow in California--only to experience racially restrictive covenants, job discrimination and state violence--Jonestown evoked African Americans' diasporic quest for home and identity.

Once there, the church self-destructed, mired in a culture of tyrannical control created by the increasingly paranoid, drug-addled Jones. Tragically, Temple members were themselves complicit in the humiliation and torture of fellow parishioners. When Jones exhorted them to commit mass suicide on that fateful night, some truly believed they would be wiped out by the terrorists he claimed were igniting race wars back in the U.S. On the so-called "death tape" documenting the community's last hours, a courageous black woman named Christine Miller can be heard resisting these lies and is shouted down by the crowd; prelude to the brutal end of a fractured dream of self-determination.

Juanell Smart lost her four children, her mother and an uncle in Jonestown. Her writings on her experience capture her ambivalence toward Jones while she was as a counselor and member of the Temple planning commission. Now an atheist, she remarked in an interview with me last year, "I grew up believing that there was a sky god and he was going to take care of me. Then Jim came along and said that there wasn't a god other than him. Jim aped what the black ministers did but he added a caveat and I'll just throw in this and be their savior. Him calling himself God was a means to an end. What picture have people seen of Jesus Christ?" She notes that, "I have always been a skeptic so it was hard for me to be a true believer for any length of time." Smart's skepticism and questioning of authority led her to break from Peoples Temple before the mass emigration to Jonestown.

*Portions of this article appeared on The Jonestown Institute Review