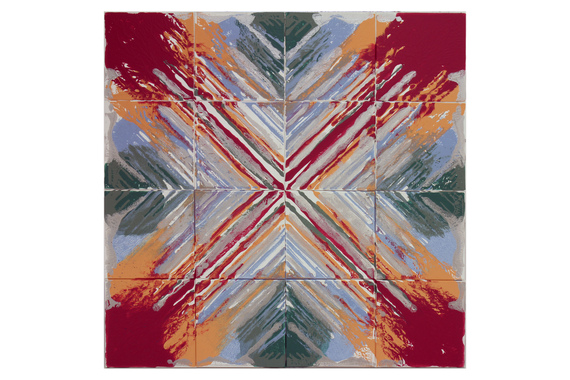 The artist known as Chisolm recently exhibited a series of delightful works at DTR Modern Galleries on Worth Avenue in Palm Beach that were a courageously inventive and colorful take off on the Rorschach "inkblot" test invented in 1921 by the celebrated psychologist Hermann Rorschach. These new small-scale studies have become two-dimensional maquettes for much larger painted works, which are now being developed in the artist's spacious studio located not far from the Atlantic Ocean. Obviously influenced by the tropical environment where he works and lives, many of the color schemes that he incorporates into his compositions have a decidedly luscious brilliance reminiscent of hibiscus blooms that magically explode with deep reds and transparent yellows set into a background of purple and shades of blue. Chisolm also has a clear interest in manipulating the visual calisthenics of repeat patterns, interpretive gestures and abstract brushstrokes within a homemade grid. 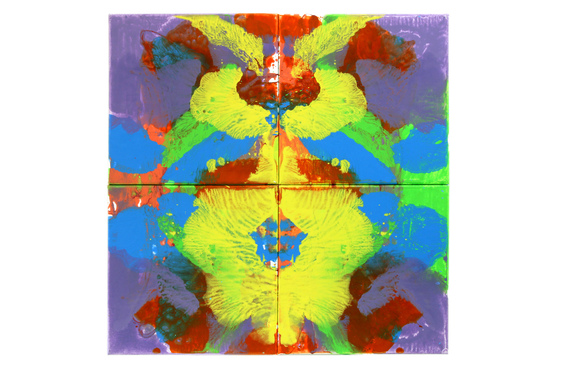 Born in Philadelphia, Mississippi in 1971, Chisolm's creative mother, Mary Francis, was a valuable influence on the direction his career would take. She encouraged him to appreciate fine art, and persuaded him to pursue those related studies at the University of Southern Mississippi. His grandmother also was helpful in pointing out overlooked designs, such as those discovered on her linoleum floor, which had repeat patterns that he utilizes to this day. Chisolm is a member of an impressive roster of artists, writers and performers who were born in Mississippi and nurtured by its genteel and traditional environment. Among the notable and influential former residents of Ole Miss are Jim Henson, James Earl Jones, Oprah Winfrey, Nobel laureate William Faulkner, Tennessee Williams, B. B. King and Elvis Presley.

Historically, artists often have been mesmerized by the creative opportunities provided through folding wet paper saturated with pigment into sections that are squished together until one side contributes a mirror image of the other. The exciting moment for the artists is unfolding the saturated paper to discover the serendipitous recurring motifs that came together completely by chance, but at the same time provide the viewer with a connective common denominator. Salvador Dali experimented with lots of blots, and he later would go back through and identify potential profiles to which he could offer a little surrealist twist by adding hand-drawn gestures that would take on a face-like appearance. Perhaps the best example of an artist who valued a blotched and uneven black line for his illustrations and later his historic paintings was Andy Warhol, who also enjoyed the surprising outcome of unfolding paper for the first time. A recent story in The New York Times featured a series of "stitched" black and white photographic portraits of author Tama Janowitz laid out in a multiple grid format, which have a distinct visual relationship with Chisolm's individual panel groupings. He has taken a cue from the Warholian attraction to black and white and has fashioned his own dramatic patterns that gently repeat small blocks of abstract designs that also seem to belatedly celebrate the very first experiments of Dr. Rorschach, who curiously created a unique kind of art by sheer accident. His original inkblot test was employed as a creativity quiz after the turn of the century; psychological experiments where inkblots were used multiplied, with goals such as studying imagination and consciousness. The value of free association (a favorite activity of artists) was to provide data about thought and personality variables such as motivations, response tendencies and, not surprisingly, personal perceptions, which naturally also appeal to an artist's sensibilities. 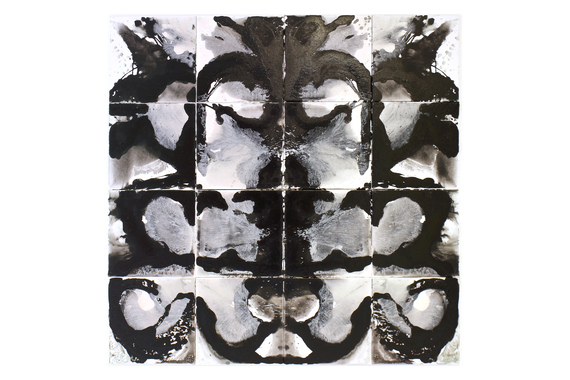 Chisolm has developed an idiosyncratic style of flowing lines and configurations that also were a novel key component in the pattern and decoration movement of the late 1970s, which was championed by the illustrious painter and recognized father of the movement, Robert Zakanitch, who was inspired while examining the possibilities of utilizing prints from vintage linoleum and fabric samples. Other artists who come to mind that share Chisolm's sensibilities are Kenneth Noland, who nearly always placed an image of magnetic-like force in the middle of his paintings whether the subject was targets, diamonds or square-shaped canvases. Brice Marden has various elements in common with Chisolm, particularly his "Red Rock" series, where meandering lines interconnect and harmonize with each other. In all his works, Franz Kline and Willem de Kooning are a constant source of inspiration for these "manufactured" abstract compositions. 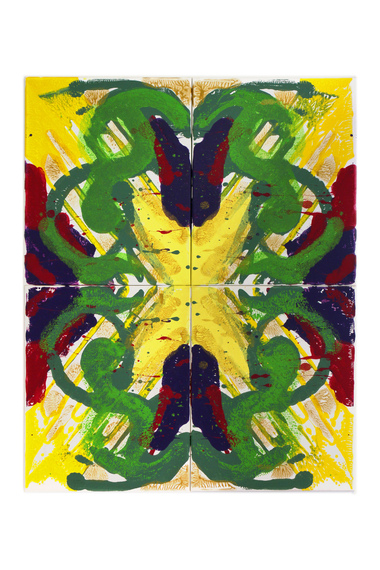 Chisolm "builds" each piece out of white square canvases that are stretched and laid down side by side, either on a large table or directly onto the studio floor. The next step is to cover certain squares with a base color that he will continue to embellish throughout the laborious process that he has developed, which initially may appear effortless until the viewer deconstructs the entire canvas and discovers numerous layers of painted surfaces supporting the blotchy reflective patterns Chisholm has added as the final design. In one striking work of deep blue forms positioned on a light green base, the artist also throws in for good measure a bit of whimsy by discreetly adding including two eye shapes side-by-side at the top of the canvas, as if a squatting figure was about to hop out of the square. 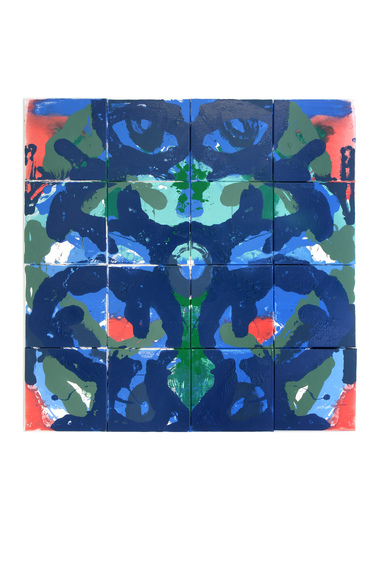 Another favorite is the Rorschach-like mirror image on paper that has a delightful narrative insinuation as the smeared composition also presents a mouse-like creature hidden within. Here the artist experiments with the unknown and untested by laying down paint on one side of the paper, and then sandwiching the painted and unpainted sides together, knowing that the shotgun "marriage" he is about to arrange has no guarantee of success or longevity, but simply is a shot in the dark while hedging a bet. 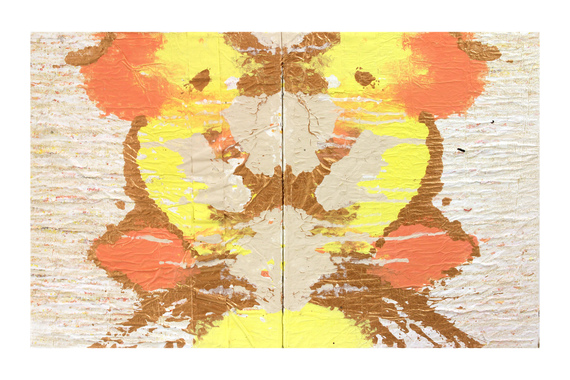 Chisolm does not limit himself to one particular style for each image about to be made. In an earlier series, he became fascinated with the aesthetic advantages of multiple layers of meandering drips that seem to cascade toward the observer in a powerful energy mix of texture and movement. Another preoccupation of the artist is a sort of warm-up process, where he takes a saturated brush full of colors and lays down with speed and agility a convincing composition directly out of the inspiration of the abstract expressionists. This small series of works was particularly impressive, as the combination of simplicity and sheer ingenuity creates a particular dynamic that can be repeated over and over, each time creating a unique and pleasant composition. At the end of the day, Chisolm's work remains exploratory and innovative as he challenges himself to expand his vision and harness his creative energy, leaving the viewer with a virtual trail of intricate and engaging clues handcrafted into handsome, compartmentalized squares that offer mysterious and magical mirrored imagery. These works also ironically take a cue from early psychological experiments that tested creativity and psychological ramifications through personal interpretation of random blots. To test a famous theory you may want to reexamine the artist's abstract two-dimensional messages and see of what they remind you. 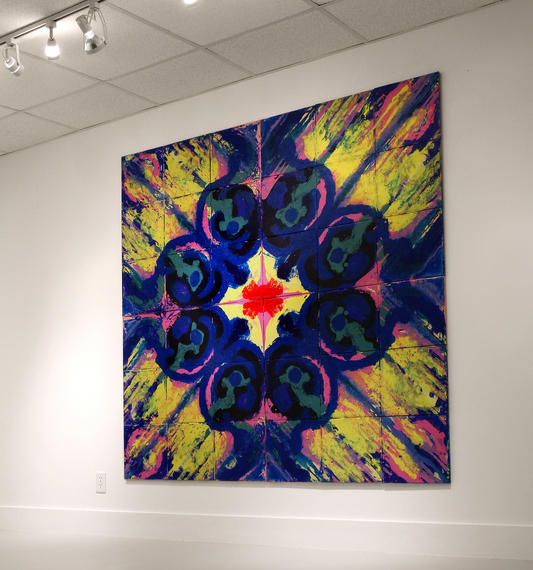 For more information about the artist: http://www.chisolm-art.net