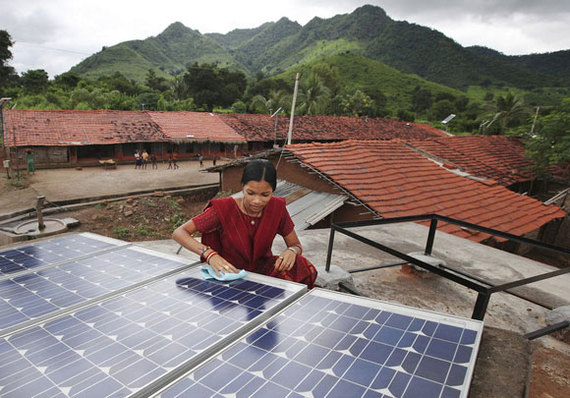 In the 21st century, it's hard to take anyone seriously who thinks coal, not clean energy, is the future for dynamic, emerging economies.

But that's exactly what Dr. Jim Yong Kim, president of the World Bank, did this week during the U.S.-Africa Leaders Summit. Dr. Kim disparaged clean energy as incapable of powering development and even worse, suggested coal needed to remain on the table for the World Bank to be "taken seriously."

Here's what he said:

Right now we have to be serious about what we're going to do to boost energy supply. And if we find ourselves in a situation where some say 'no coal, no nuclear, no hydro,' then we're not serious.

The truth is clean energy is the future of energy access efforts with a $12 billion pot of gold awaiting those innovative enough to catalyze it. Even more exciting is that much like cell phones, distributed clean energy is poised to leapfrog the ineffective centralized grid and put power in the hands of the people living beyond the grid today - not decades from now. But that's only if leaders of important development institutions -- like the World Bank -- finance the clean energy technology of the future, rather than prop up the dirty industries of the past.

Dr. Kim's statements are even more troubling because they come at a time when we are making great strides to do just that. President Obama's Power Africa Initiative announced a historic Beyond the Grid program set to catalyze new technologies -- like off-grid distributed solar -- which will end energy poverty.

But rather than moving investment into these exciting and innovative clean energy markets, Dr. Kim is insisting that one of the world's largest international financial institutions, the World Bank, can't be taken seriously unless it continues to fund dirty and dangerous coal projects. And, he wants to use public money -- your money -- to do it.

Tell Dr. Kim and the World Bank to join us in the 21st century and put money into catalyzing beyond the grid solar, not dirty coal. It's time that those who lead development institutions realize the only way to be taken seriously is to move beyond 19th century energy sources to our modern energy future.