Skala Sikamias, Lesbos, 4 p.m. A Norwegian volunteer has spotted, using his binoculars, a dinghy approaching from the Turkish coast.

As soon as the boat has been identified, a human wave of volunteers gets organized for the "first reception" of the boat. An inflatable boat and a Jet Ski of the Spanish NGO Proactiva are already in the water with five lifeguards that have voluntarily undertaken the supervision of the passage between the Turkish region of Ayvalik and Lesbos, ensuring a safe arrival for refugees.

This scene occurs many times on a daily basis at Skala Sikaminias, a beautiful fish town which constitutes one of the main refugee entry points in Greece.

We visited Skala for a needs assessment, a monitoring visit of projects offering support to children traveling alone, financed by the European Economic Agreement, (EEA) NGO Fund in Greece "We Are All Citizens" and managed by the Bodossaki Foundation.

Greek authorities are absent during this whole process.

The passage between Turkey and Skala Sikaminias is a distance of only 11km that under "normal circumstances" can be covered in less than an hour.

As soon as the boat arrives 10 volunteers who have assumed "first reception" duties greet them in the sea. Some of them start giving guidelines in Arabic to the captain on how to take the dinghy out of the water.

Greek authorities are absent during this whole process.

Amongst the 50 people on the boat there is a large number of children and newborn babies. The volunteers make a circle around them and welcome them first in English and then in Greek: 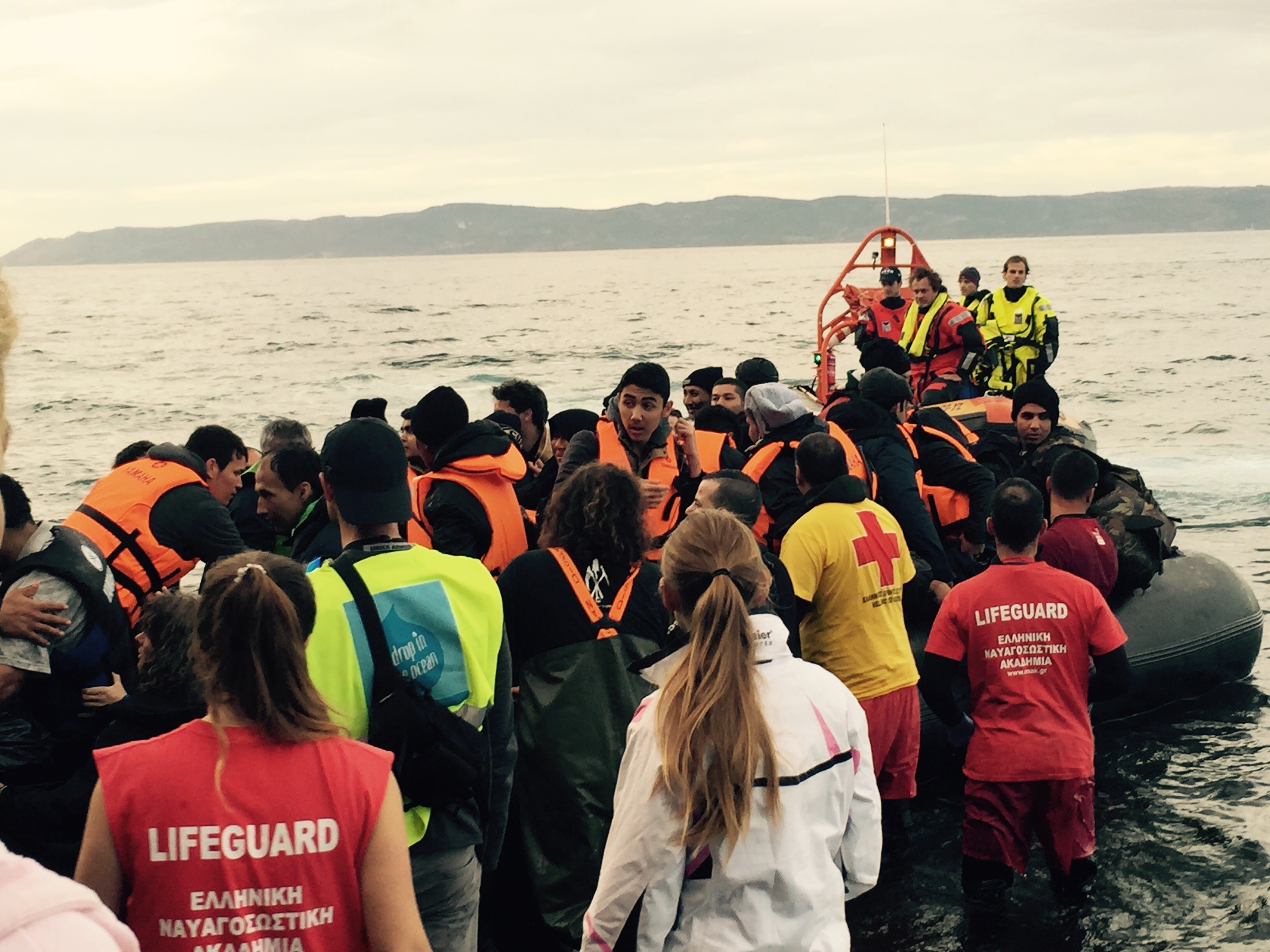 The efficiency and effectiveness of task distribution amongst the volunteers of the two camps is impressive.

The members of the team responsible for "first reception" help transfer the passengers and their belongings from the boat. They arrange used lifejackets on the shore, they offer electrical blankets, they identify and help the people who are in need of first aid and medical provision and then escort them to the two camps.

Two guardians, members of the NGO Metadrasi Network for Unaccompanied Minors have just spotted two children that have been traveling alone. "We are going to stay with them in the camp until we find a way to take them to the First Reception Center in Moria," they tell us.

On the beach there are a number of volunteers as well as staff from the UNHCR and other Greek and international NGOs like Metadrasi, Praxis, Doctors of the World, Doctors without Borders (MSF), the International Rescue Committee (IRC), Save the Children and others. Scandinavian emergency relief NGOs like the Norwegian A Drop in the Ocean offer first aid assistance and a van of Adventist Help has been turned into an improvised medical unit.

In parallel operation is the team of "second reception." The invisible heroes of the "second front," as they call them, are responsible for providing warm food, water and dry clothes. A special space within the camp has been turned into a baby and child friendly area. 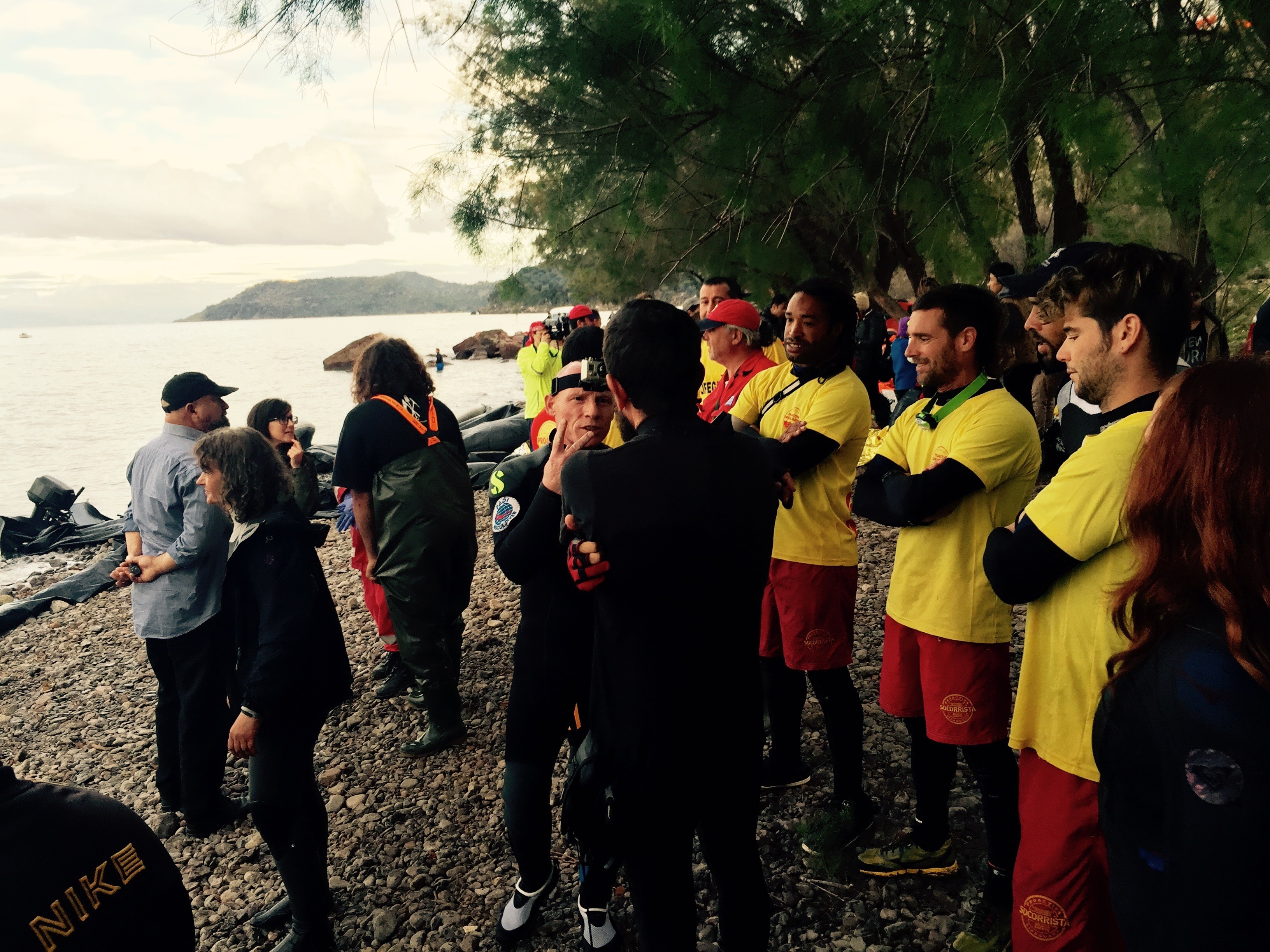 At the moment in Skala there are two volunteer camps that have been created since September 2015: Platanos and Lighthouse Refugee Relief.

Platanos is an independent Greek initiative that has its roots at the independent refugee camp that was created in Pedion tou Areos, one of the largest public parks in the center of Athens last summer. At the moment Platanos has attracted volunteers from all over the world. Very often these are professionals that take time off their work to come and help in Lesbos.

The local population has also been very actively involved. Many of them have offered their homes to accommodate the volunteers free of charge. Local initiatives like Starfish and O Allos Anthropos (the Other Human in Greek) transfer people from the points of entry to the registration points and provide meals on a daily basis. "In the beginning we were cooking for 10 people, a month later for a hundred and now we make thousands of meals every day," they tell us.

The second camp: Lighthouse Refugee Relief Initiative is a non-profit created by Norwegian, Swedish and British volunteers with the aim to provide emergency humanitarian relief to the migrant and refugee population that arrive in Lesbos. Special emphasis is given to the most vulnerable parts of the population like children, women and the elderly. They offer food, shelter, medical provision and transfer to the First Reception Center in Moria.

The modesty and devotion of all the volunteers is impressive. Despite the significance of their individual effort, most of them don't like any kind of publicity.

Both camps are open to whoever wants to help. A stay of at least a week is encouraged, in order for the volunteers to be able to understand and conduct their role in an efficient manner.

Regardless of the lack of a central coordination authority, the efficiency and collaboration that takes place between the two camps is exemplary. The modesty and devotion of all the volunteers is impressive. Despite the significance of their individual effort, most of them don't like any kind of publicity.

The day we were there, 3,500 people arrived in Lesbos. It is worth mentioning that 48 hours prior to our arrival no boats had arrived, for reasons that haven't been confirmed yet. Some say that this was due to a military exercise in Turkey while others claim that mass arrests of member of trafficking networks occurred.

According to the UNHCR 406,206 people have arrived in Lesbos from January to November 2015. This number constitutes 58 percent of the total number of arrivals in Greece. In November alone 63,400 people arrived in Lesbos. The main countries of origin are Syria (47 percent), Afghanistan (37 percent), Iraq (7 percent) and Iran (4 percent).

The numbers and the situation on the field indicate that we are dealing with the biggest demographic change since WWII. The term "migrant" or "refugee" crisis can't explain the complexity of this phenomenon.

Lesbos is the entry point that accepts the largest number of arrivals. There is a widespread concern that the island is facing a medical emergency, without adequate medical coverage neither for the needs of the population arriving nor for the needs of the locals. In the crossing of this passage so many people have lost their lives until now. Winter is arriving and weather conditions will increasingly deteriorate. Within this context, the absence of Greek and European authorities can no longer be justified.

We might have not seen any representation of an institutional authority, but what will remain indelible in our memory is the humanism expressed in the solidarity and the exemplary effort of the volunteer community in Skala. "It's as if "Mermaid Madonna"* came out of her little white chapel and made a miracle. I can't explain what is happening any other way. What we see in Skala must have been inspired by a superior force. If you look closely at the volunteers' faces you can see it yourself," George Konstantinou, a fisherman at Skala told us.