I want to put this somewhat intellectual blog posting into perspective. Below is a quote from Matt Taibbi's new book, Griftopia-Bubble Machines, Vampire Squids, and the Long Con That Is Breaking America (Spiegel & Grau, 2 November 2010). Click on the title of the book to read my full review.

QUOTE (32): What has taken place over the last generation is a highly complicated merger of crime and policy, of stealing and government. Far from taking care of the rest of us, the financial leaders of America and their political servants have seemingly reached the cynical conclusion that our society is not work saving and have taken on a new mission that involved not creating wealth for us all, but simply absconding with whatever wealth remains in our hollowed out economy. They don't feed us, we feed them.

In other words, nothing being discussed by any politician matters at all, because behind the scenes they have sold us out in such a total manner as to call into question why they are still in office. We have been stupid. That ends now, I hope.

My book, ELECTION 2008: Lipstick on the Pig (Earth Intelligence Network, 2008) is free online as well as on sale at Amazon as a very nice wire-bound color reference work. The below graphic opens the chapter in that book, "Candidates on the Issues": 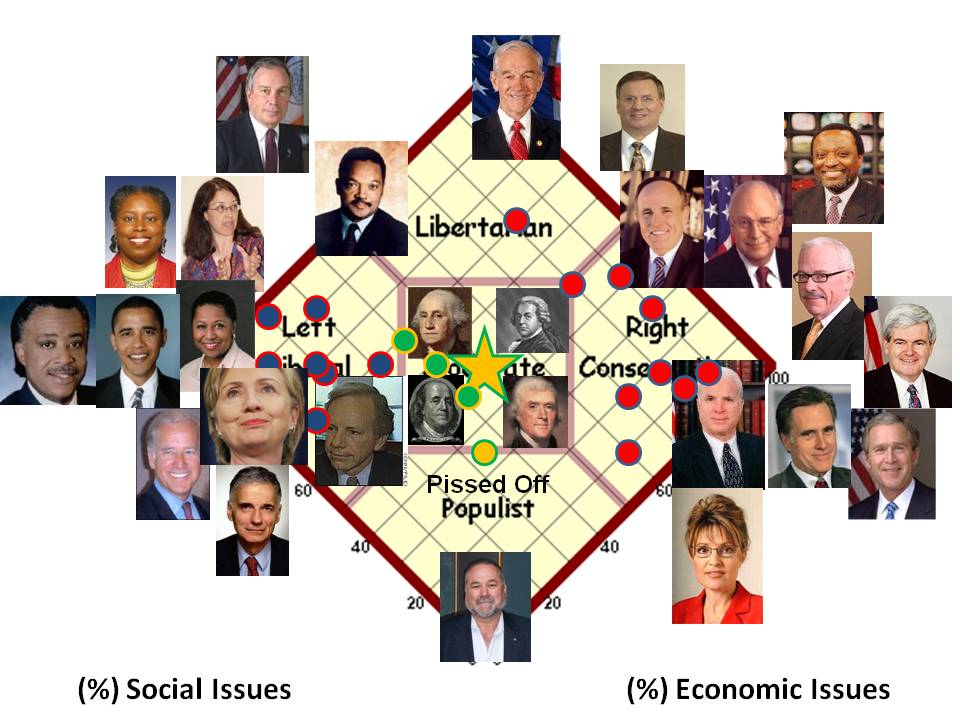 Here are links to each of the chapters in the book, in the aggregate they offer a context for national deliberative dialog by sane people.

The Substance of Governance

Candidates on the Issues

Call to Arms: Fund We Not Them

What I have realized over time is that candidates do not have positions, they have postures, and those postures are generally shaped by ideology and very narrow constituencies. Because of decades of corruption at the federal, state, and local levels, political districts have been so gerrymandered as to be representative of only one of the two extremes that monopolize power.

As much as I would like to see these existing candidates--including those elected just now in November 2010--make informed decisions, I have come to the conclusion that no amount of intelligence is going to displace ideology--we must strive to achieve Electoral Reform (1 Page, 9 Steps), and in that way displace the ideological extremists and substitute instead the more diversified Collective Intelligence of the entire Nation, not just on Election Day, but every day on every issue through the National Council on Dialog and Deliberation (NCDD) and the Committee for a Unified Independent Party (CUIP) enabling constant polling in which we all participate in every decision that spends our tax dollars.

Still, issues must be discussed. Today I list the issues that are discussed in more detail in the free online chapter above. Next week I will begin to discuss the management and budget of the twelve policy areas that must be addressed together--holistically--something that is not possible right now given the way the federal government has grown so distant from both reality and democracy.

With a Tip of the Hat to OnTheIssues, which gave me permission to leverage their extraordinarily righteous work, here is a list of issues that are used in pretend debates where the Republicans and the Democrats have conspired to exclude all other candidates, and even to exclude the League of Women Voters that used to be the honest broker of debates (they were fired for wanting to include third, fourth, and fifth party candidates, and having the temerity to not provide questions in advance).

Use the chapter to see how the 2008 candidates positioned themselves, and the key words associated with each issue below. For this blog I only provide the moderate centrist proposed starting point for sane, intelligence-driven deliberative democracy.

Education. Proposed: Redirect $20 billion a year from secret intelligence to free online & fully-funded Head Start, K-12, and college on a competitive basis. Apprenticeship & civics every year. No bi-lingual education--three months intensive English free for all immigrants, English language competency required for both access to education and to government employment at all levels.

Families & Children. Proposed: Support families, design neighborhoods, one good job per family, with no taxation of family or on healthy food and beverages, get TV out of kid's lives

Drugs. Proposed: get CIA and DEA out of drug business; burn banks for laundering, invest in free education and full provision of clean water and clean energy in Afghanistan, Mexico, and the Andean countries where all the drugs are produced and are--for now--vital to those economies.

Gun Control. Proposed: Right to bear arms is non-negotiable less felons still on probation. Concealed permits not required--felons who have paid their debt to society need only carry a card certifying their restoration to full citizenship status--states may not abridge felon rights once court's sentence has been completed. Achieve accountability with barrel printing and cartridge signatures--anyone can kill, be identified, and if wrong, held accountable.

Energy & Oil. Proposed: Tax externalized costs ($12 per gallon); two-way grid, do it all.

Free Trade. Proposed: Fair trade not free trade. Reveal "true costs" of all goods and services. End slavery in America first, then in the rest of the world.

Homeland Security. Proposed: Make Stephen Flynn the Secretary with mandate to close it down in four years; restore FEMA; redirect $20 billion from spies to water and food infrastructure and safety; fund Citizen Intelligence Networks ($30M per state per year).

Immigration. Proposed: increase Border Patrol to 30,000; state & local crack-down on visa violators; withdraw all forces from overseas; create four forces after next including $200 billion peace force; fully fund global free education online in 183 languages, work with Brazil, China, India, Indonesia, Iran, Russia, and Venezuela to give free cell phones to poor and educate them, world-wide, one cell call at a time. Peace comes from prosperity, and prosperity comes from education one question at a time--the 5 billion poor don't have eighteen years to waste.

Missing from the above range of issues are Agriculture, Society, and Water. Here are some starting points for those three vital policy domains.

Society. Restore universal service with one common basic training period followed by service in Armed Forces or Peace Corps (voluntary) or Homeland Service (all others). Make health a public service similar to police, fire, and other common government services. Place great emphasis on preventive medicine, healthy lifestyles, and a fit population that has received a free liberal education.

Water. Prioritize the truthful public evaluation of the state of our national water resources, the true cost of all uses of that water, and an end to water waste and water pollution. Fund a global Marshall Plan to restore aquifers, beginning in the USA and the Middle East. Fund regional water authorities able to make all water issues transparent to the public.

I felt I had to provide a full discussion of what good governance can and should look life, before centering my blog on the non-negotiable need for Electoral Reform (1 Page, 9 Steps), and that is what I have sought to do with the last thirteen blog posts here at Huffington Post. We can and we should be a Republic again, self-governing, with the federal bureaucracy being a service of common concern to the United STATES of America. If we are not successful at gaining Electoral Reform, then I predict that the USA will break up, not necessarily into the Nine Nations of North America that Joel Garreau has written about, but certainly into smaller regions where states band together to nullify federal regulations running the gamut from the corrupt to the insane, and some states--Vermont being one, Hawaii another, are almost certain to actually secede, as is their right. Here is a look at that possibility. 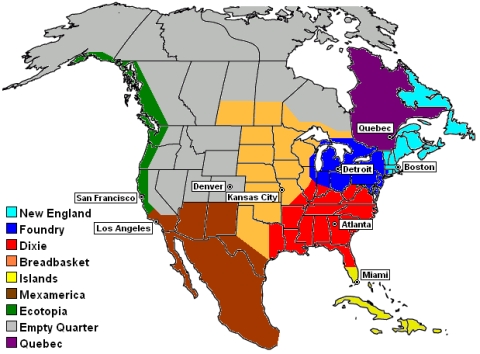 Next week I will discuss Electoral Reform on Tuesday and Secession on Thursday.