Things are usually more creative on the margins, a notion that became evident during the recently concluded meetings of the American Anthropological Association (AAA) in Denver. The proposed AAA resolution to boycott Israeli academic institutions, which occupied center stage, sparked a series serve and volley debates in the corridors of the cavernous Colorado Convention Center as well as during several specially organized panels. At a jam-packed Association business meeting more than 1000 anthropologists voted to boycott Israeli academic institutions --part of a broader BDS (Boycott, Divestment and Sanctions) campaign to protest Israeli policies and practices.

Although the news reporting on the vote suggests that the AAA boycott is a done deal, the vote tallies, which represent roughly 10 percent of the total AAA membership, are not final. The vote puts the resolution on the AAA spring ballot for a final determination. It's anyone's guess how the entire membership will vote on the resolution.

The vote, which BDS proponents called "historic," comes at time when anthropologists are experiencing a sense of fading respect and dwindling research support. In such a climate the buzz in our discipline has been to increase our relevance, to bring an anthropological perspective to the public sphere, and to have more of an impact on the design and implementation of public policy. The BDS debate in Denver is one example, among many others, of this disciplinary tack.

In Denver a perfect storm of social and political events focused anthropological attention on the incendiary political climate of Israel/Palestine. Here and now issues understandably grab our attention. Sometimes, though, it's good to emerge from the confined space of here and now debate and move to the margins--spaces of imagination and creativity. On the margins--of anthropology--you get a sense of the future, a sense of how anthropologists will communicate culture in the 21st Century. Beyond the boundary of the BDS debates you might have come upon stimulating discussions about digital anthropology, anthropology and art, anthropology and fiction and anthropology and climate change. At the edge of the margin you might have stumbled upon an ethnographically contoured on-site pop-up performance.

And if, by chance, you ventured beyond the disciplinary edge in Denver, you might have wandered into the wind machine at the Ethnographic Terminalia (ET), a collective of anthropological artists and artistic anthropologists who for the last seven years have constructed installations that bring a sense of tactility to bloodless academic practices. Last year ET curated a set of installations that engulfed visitors in the tactile dimensions of memory. The timely subject of climate change inspired this year's installation.. In the installation catalog the ET Curators (Craig Campbell, Kate Hennessy, Fiona P. McDonald, Trudi Lynn Smith, and Stephanie Takaragawa) wrote:

In the midst of this boom of writing and thinking and worrying about the end of the world brought on by anthropogenic climate catastrophes, Ethnographic Terminalia presents Aeolian Politics. It is indeed the end of time for glaciers that have withstood thousands of years, cycling through periods of freeze and thaw...It is the end of time for entire species extinguished at such an alarming rate that even the most hardened observer of the 'news' must be a little shaken and perturbed.

It is in this moment that we have enthusiastically collaborated with Cymene Howe and Dominic Boyer to translate their work, Aeolian Politics, into an exhibition. We all inhabit the weather world, regardless of the little shelters built to insulate us from the elements. The banal familiarity of the seasons as they wash over us no longer require studied effort to estrange them. Strange weather is here. The force of this world--which we re-engineered through centuries of mining, fossil-fuel burning, over-fishing, agro-industrial growth, and so on--imposes itself upon our everyday so that we must make a constant effort to make the strange familiar and pretend that everything will be okay. At times the veneer of a stable and predictable life seems terribly thin.

We welcome you to explore the Windhouse, a gallery within a gallery, caught up in an airy torrent of wind politics where the materiality of Zapotec words invoke the weird familiarity of wind in the weather world. 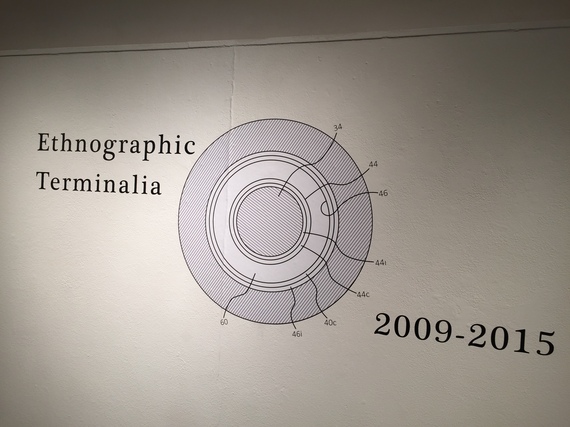 For me this kind of multi-media installation points to a powerful future of public anthropological engagement and influence. In these constructed spaces, visitors--men, women, older adults and children--are able to feel the reach of memory or sense the raw power of climate change both of which can create the wonder of being "moved." In such an environment people can learn how to sensuously dwell within things like memory or climate change. Such experience can shake up established modes of thinking and provoke grassroots social, cultural and political change.

The great documentary filmmaker Robert Flaherty once said that film is the longest way from point A to point B. Indeed, the heavily traveled straight highway cuts through the center of things. It promises a quick trip between destinations. The lightly used side road snakes its ways through marginal spaces. It may be may be sinuous, risky, and time-consuming, but in the end it is well worth taking.