The State Department is exploring how connection technologies might link rape survivors with the justice they seek.

When Secretary of State Hillary Clinton was visiting the Democratic Republic of the Congo one year ago, she met a woman who, in her eighth month of pregnancy, had been raped multiple times. Distant from any hospital, the woman was kept alive through the efforts of fellow villagers to stem her bleeding (they packed her wound with grass). Her fetus, unfortunately, died.

"I've been in a lot of very difficult and terrible settings," Secretary Clinton remarked. "And I was just overwhelmed by what I saw."

In the Congo, incidents like these are not isolated; rather, there have been an estimated 200,000 reported rapes in the last 14 years and upwards of four million people killed as a result of the surrounding conflict and displacement. As recently as the end of last month, another 200 women (and some young boys) were gang raped by Rwandan and Congolese armed groups not very far from a United Nations base. While some enhancement efforts are underway, the Congolese judicial system needs a strong dose of capacity-building, anti-corruption efforts, and pure human capital to meet the overwhelming need it faces. Most rape survivors are so remote from centers of justice that they have no hope that their attackers will be held accountable for their crimes -- many do not even know that this kind of sexual violence is against the law.

Flash forward one year to the National Geographic Society museum in Washington, D.C. A small but earnest exhibit about design objects for "the other 90%" features low-cost, durable design solutions from technologists and entrepreneurs for shelter, health, water, education, energy and transport issues in developing countries. 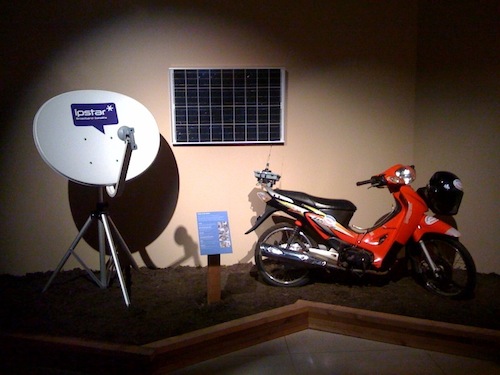 At the back of the exhibit, a visitor will find the Internet Village Motoman Network, represented by two objects: a 33-inch satellite dish and a racy, red motorcycle. In fifteen schools, telemedicine clinics, and government offices in a remote province of Cambodia, students and teachers now have access to the internet and nurses can conduct medical visits and transmit information to Boston-based doctors for quick medical opinions and treatment recommendations. These improvements in education, health, communication, and governance have come thanks to five Honda motorcycles equipped with mobile access points and a satellite uplink.

If Cambodian social entrepreneurs can put satellite dishes on schools, clinics, and motorcycles and see gains in education and health, why cannot Congolese civil society actors use the same technology to connect rape survivors to legal advice, medical and psychosocial assessments, and justice in court?

In the spectrum of judicial engagement from initial incidence of violence to case resolution, 21st-century technologies could be used to report crime and capture witness testimony, educate citizens about rape law, train local police in forensic evidence collection and create a dialogue between judges and community leaders about nascent rule of law efforts. This summer, I was part of a team of people at the State Department that crowd sourced the best ideas for a "mobile justice" intervention, to be piloted in the Democratic Republic of the Congo in the coming months. Thinking systematically, we identified a few strong arguments for matching technology to justice.

First, there are technologies that can help a developing country leapfrog from no access to justice to some access to justice. It may seem like a drop in the bucket for 100 new people each year to have their cases heard in court -- each of those cases, however, represents the collaborative efforts of survivors, community counselors, police, prosecutors, judges, defense attorneys, doctors, technologists, local elected leadership, and telecommunications providers, among many others. Any means available to create, repeat, and expand patterns of interdependence among these stakeholders -- facilitated through technology -- will help to cement the permanent presence and responsibilities of a fully governing state.

Second, these new technologies are not hard to use, are becoming ubiquitous in even the most remote corners of the globe, and are cheaper than ever to implement. They have largely evolved to the point that even technophobes can easily create and maintain a web presence, or use SMS-based reporting systems. For citizens with literacy challenges, it is likely that a friend or neighbor can lend a helping hand. Telecommunication companies have also shown a willingness to participate in technology development projects, given the significant market opportunities for a whole host of products and services.

Finally, tech interventions focused toward one issue often have significant secondary benefits. Let us say that a remote local organization could be wired with satellite internet in Eastern Congo and linked to a court, a hospital, and a legal service center in the provincial capital. Conceivably, survivors and witnesses could then testify in court via video conference, receive on-site telemedical assessments much like the Cambodian case, and access legal guidance. Once that local NGO is wired with internet, however, the technology could be used to provide education and training to schools, police officers, businesses, and other NGOs. Video-conferencing tools could be used to develop networks of civil-society organizations, so that they could share best practices, discuss failures, and warn each other of pending violence. Blast text-messaging systems based out of those centers could rapidly expand the delivery of educational messages about health concerns, business opportunities, and recreational activities. Finally, the local NGOs themselves would be better able to shape and transmit their own messages, draw media attention to their successes, and express their opinions and experiences directly to policy makers in their own countries and among international governing bodies. With the right infrastructure investments, a fairly rudimentary set of technology tools has opened up a world of possibilities.

What is exciting about this moment in American foreign policy is a commitment at the highest levels to the idea that connection technologies can have an appreciable impact on key diplomatic and development concerns. Mobile justice done right will require not only this culture of entrepreneurialism and collaboration across the public and private sectors. It will also require a sustained understanding of how the judicial landscape is evolving, and a concerted openness to gathering the best ideas, identifying successful solutions, and tracking indicators of effectiveness. If this intervention is successful in Congo, it could be re-deployed in other similar places in the future. I look forward to seeing the United States take a prominent and pragmatic role in bringing justice to the woman that Secretary Clinton met one year ago, and to the many others like her who deserve recognition and recompense for what they have endured.

Kate Krontiris is pursuing graduate studies in public policy and business at the Harvard Kennedy School of Government and the MIT Sloan School of Management. She spent time recently working for Alec Ross, the Senior Advisor for Innovation to Secretary Hillary Clinton.