Facebook has become quite the breeding ground for apps aimed at culling friend lists and turning them into something more like romantic hit lists. Now, a free web app called On The Rebound has joined the ranks of Bang With Friends, iWould and their similarly themed counterparts.

Launched earlier this month, the app analyzes available data about the current and previous relationship statuses of your Facebook friends -- going back a total of six years. That information helps to generate a score of that person's rebound potential so users can determine whether it's the right time to make a move. The app also offers short notes of advice on how to proceed.

Coombs said the app takes into account how long your friends have been single, as well as how often they have entered relationships and the average length of those relationships.

An obvious limitation of the app is that it can only analyze data that a user provides by way of his or her relationship status. That means there's little information it can glean about your crush who has had a significant other for three years but hasn't declared it formally on Facebook.

Still, Coombs maintained that there are plenty of people out there still posting their relationship statuses, especially among younger sets.

Coombs noted that the app is meant more as a "utility" for users to gain insights about the friends they might be interested in, as opposed to an overt hookup app. But it's up for debate just how much stock one should put into the words of advice that accompany the scores generated for each person.

BuzzFeed pointed out that the advice for the men seems firmly geared towards those with a clear pickup-artist mentality.

"It's been a little while for her, go for it," the app instructs its male users regarding a female user who has been single for four months.

Female users, on the the other hand, might see the a warning of sorts about an eligible bachelor: "Trust me, he's using you. Use him back!"

In response to some of the criticisms about the underlying gender stereotypes evident in some of the messages, Coombs said that much of the advice is directed at both genders.

"The comments are equaliy outrageous, controversial and derogatory towards both men and women," Coombs said. "For example, one says, 'Loneliness plus desperation equals opportunity,' and there was one for men, and one for women."

Will you try On The Rebound? Share your thoughts about the app in the comments section (below), or tweet us @HuffPostTech.

PHOTO GALLERY
On The Rebound App
Download
Calling all HuffPost superfans!
Sign up for membership to become a founding member and help shape HuffPost's next chapter
Join HuffPost 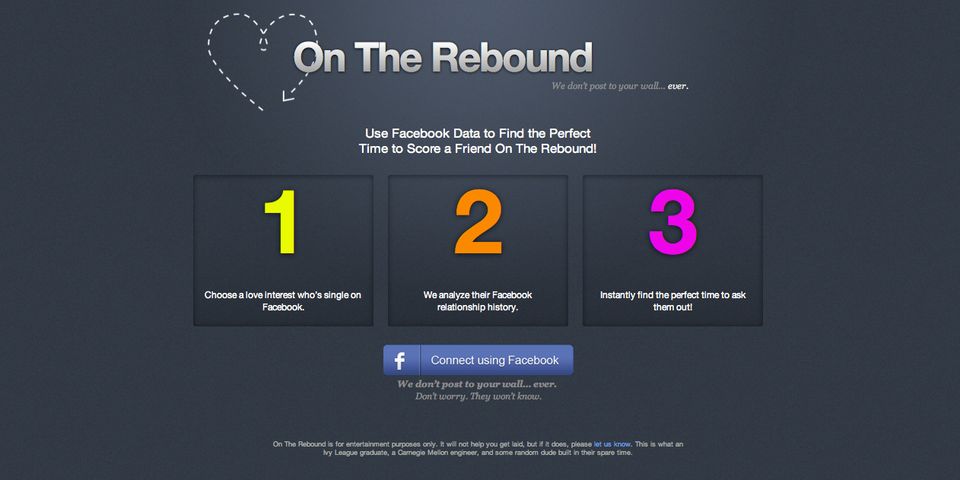