There is a 27-year-old man in Lebanon today who came here from Syria. His voice shakes when he describes the public execution ISIS forced him to watch in his town square. He breaks down in tears when he recalls the death of his mother, struck down by Assad's bombs. Under threat from one form of terror and then another, he fled. He has nightmares that ISIS will come for him and, because he is gay, he faces violence here, in Lebanon, too. Like almost all refugees, he is not allowed to work, and he is often on the verge of homelessness.

He is kind, talented, resilient and eager to build a new life; he is in pain, in sorrow and seeking help; and it would seem that he and his fellow refugees strike fear into the hearts of many of our public figures who are seeking to block the entry of refugees into this country, not because of who they are, but because of who they might be.

In classical Arabic poetry, there is a wonderful theme of the one who seeks refuge and the one who grants it. It was not only good to offer refuge to the lost stranger emerging out of the horizon -- it was a point of honor, because it demonstrated that the one who granted refuge was strong enough to be unafraid. Unafraid of the stranger in need and unafraid of his pursuer. Weaker tribes restricted the power to grant refuge, while stronger tribes proudly bestowed the right even on their children.

The U.S. Refugee Admissions Program does not admit refugees as strangers emerging from the horizon, nor is it run by children. The identity and refugee claims of applicants are thoroughly vetted, first by the UNHCR and then by the Department of Homeland Security and a host of other federal agencies. Security checks usually last 18-24 months. No other persons seeking entry to this country undergo more scrutiny than refugees.

ISIS wants to trap Syrians in its perverse nightmarish world and has released propaganda videos calling refugees back; the Assad regime keeps lists of the wanted at checkpoints so that they can be arrested and tortured should they try to flee the country. By welcoming those who have escaped, we send a message to ISIS and Assad simultaneously: Your people have chosen freedom, we are proud to offer it to them. Your threats will not shake us.

In contrast, those who have been shaken propose that instead of offering refuge, we offer more money. By all means, increase humanitarian aid to Syria's neighbors. Under even the most ambitious resettlement plans, the vast majority of Syria's refugees will remain in the Middle East and humanitarian aid helps them survive. Resettlement is a solution for the most vulnerable, who are still in danger after they've crossed the border -- which is why throwing money at the crisis will never be enough. Money will not help a man who was kidnapped and shot and is still threatened by a Shiite militia in Beirut because he protested against the Assad regime. Money is not enough for a man who was severely beaten in a Lebanese jail and is at risk of deportation to Syria because he has been charged with the crime of being gay. Money does not reunite families separated by national borders or ensure vital medical care when the procedures are locally unavailable.

Have we become a nation that bases its actions on fear rather than love? Do we shut out those in need because we are afraid we cannot protect ourselves? We are not as weak as this. We are strong enough to allow ourselves to demonstrate compassion.

A young transgender man in Beirut lives in one small room that he can only afford with help from friends and a small stipend from an NGO. He avoids his neighbors because they could make trouble if they find out he is transgender or that he is a refugee without legal status. Long periods without water and electricity are frequent. He carefully rations his food. One evening in September, he came across two refugees in the late evening and realized they were planning to spend the night outside. He was appalled. He could not bear the idea that his room had space for them, and yet they were on the street while he was under a roof. Despite his reasonable fear and distrust of strangers, despite living without status in his country of refuge, and despite not knowing anything about the two people, he invited them to stay with him in his room for a little while until they found another place.

If someone in a position of such extreme vulnerability can master his fear enough to open his doors to strangers and share his home with them, surely the strongest nation in the world, equipped with thorough knowledge of those applying for admission and all manner of systems to protect itself, should want to do the same. We cannot choose fear over compassion, and we are not compelled to. Protecting ourselves and protecting others are two worthy endeavors that can exist side by side beneath our spacious skies, beyond our air-bridged harbor. America need not be afraid. 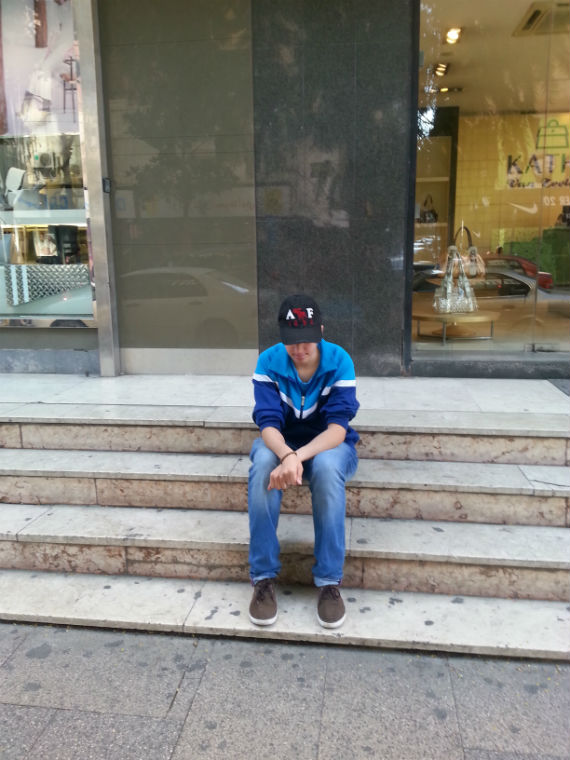 A young refugee in Beirut on the steps where he met two refugees and invited them to stay with him in his one room apartment.
Photo credit: Kate List