I was so excited to attend Dreamforce in San Francisco this year, along with 130,000 other tech enthusiasts from all over the globe. The annual conference is hosted by Salesforce, with CEO, Marc Benioff as the Master of Ceremonies. This year's keynotes included Yahoo CEO, Marissa Mayer, Facebook COO, Sheryl Sandberg, thought leaders Dr. Deepak Chopra and Dr. Wayne Dyer, among other luminaries. [1]

I decided to drive, so I could include a couple of meetings on the way back. Midway from LA to San Francisco, I was startled to see that my gas tank was on empty. I had filled it up the day before my trip, and wondered how I had not noticed the low fuel indicator light. As soon as I started looking for signs of a gas station, I passed a freeway sign that read, "Next Gas Station - 20 Miles." Yikes! I said a prayer, and exited the freeway in search of a local gas station.

I pulled over and reached for my trusty apps. I Yelped.[2] I Googled. [3] I Mapquested.[4] Just like the sign said, it looked like it was 20 miles to the nearest supply of petroleum.

Surrounded by farm fields, I pulled up to the one and only building in sight. The sign said, "T & A Shipping." My only reference for T & A harks back to my days on Broadway. In the song, Dance 10, Looks 3, from the mega-hit musical, A Chorus Line, one of the female dancers sings praises for her new "tits and ass," and raves that her new assets are helping her to get noticed at casting calls.[5] I hoped that T & A Shipping was transporting something else, and went to look for help. [6]

I yelled into the silence, "Hello! Is anyone here?!"

A man with a kind face popped out from around the corner. He had his phone in his hands and had been taking photos of the huge beautiful rainbow above our heads. I hoped that the rainbow was a sign. I had just driven through a torrential downpour. At the very least, I felt reassured to know that I wouldn't drown in a flood today.

The man asked, "Are you Ok?" I told him that my fuel indicator was at the bottom of the empty range, and asked if he could direct me to the closest gas station. "Well... it's about 20 miles from here." Being a girl from the big city, I smiled and insisted that we were obviously having a misunderstanding of some kind. There has to be a gas station in the vicinity!

I could feel myself starting to panic. This is the United States of America, land of oil and gas subsidies. If ever I needed payback for my busy tax dollars at work, it was now.

He smiled knowingly, like he's been through this conversation before, and replied,"Nope. The closest gas station is 20 miles from here." I took a deep cleansing breathe. I asked, "Can I pay you for enough gas to get me to the closest gas station?" He replied that they only used diesel in their trucks, and my PT Cruiser could not digest diesel fuel.

OK - On to Plan C. "Can you tell me where we are?" The man disappeared into the building and came out with their address written in magic marker on a piece of paper. We were in Cantua Creek, [7] as in "U-a-can't" get there from here without gas in your tank!

I took another deep breath, found my AAA card, and made the call. I pay extra money for AAA+ [8], AAA's extended coverage area plan, which I was hoping covered farmland. The operator tried unsuccessfully to locate my whereabouts on her map, and transferred me to another operator in another call center. The second operator told me that the address I had just spelled out for her from my piece of paper did not exist. Uh-oh...

Just when I realized that my deep breathing had morphed into hyperventilating, the man told me he would be right back and disappeared into the building again. I steadied myself, and hung in there with the AAA+ operator, while she searched for my whereabouts.

The man came back with his co-worker, who was carrying a gas can!! "Wow! Thank you so much!" I hugged them, and called it quits with the AAA operator, who was still trying to determine our general location. 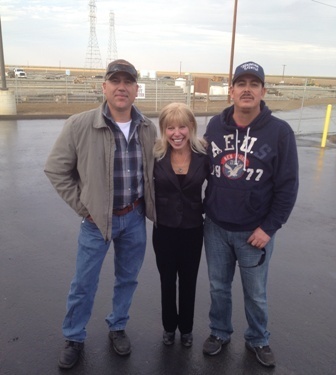 The good Samaritans, Mario and Francisco, kindly poured the priceless petrol into my tank. Then they started my engine to make sure that the fuel level indicator registered enough gas to get me to the gas station. I tried a couple of times to pay them, and they would not accept payment! Wow!!

I wanted to thank them for their kind generosity. So I told them about my invention, and gave them download codes for complimentary months of messages.

And then Mario and Francisco gave me a big portion of what I call, "Soul Food." They both looked so touched that I had wanted to "bless them back." They received my gratitude gift with such openhearted appreciation that I got "God bumps."

I hugged my new friends, and got into my car to get back on the road. Francisco told me not to leave and ran back into the building. A minute later, he came out with a box filled with his freshly picked lettuce. T & A Shipping did transported lettuce around the country!

The lettuce is really delicious and a great reminder. "Let us" always have enough gas in the tank to get where we are going! Lesson learned!

For Robin's GPS for the Soul guide, click here.