Over the past two years, activists, advocacy groups and community members have secured significant gains in the fight for increased access to healthcare for transgender and gender non-conforming (TGNC) communities in New York and nationally.

The New York Legal Assistance Group's LGBTQ Law Project works daily -- both through direct client representation and broader public policy advocacy -- to ensure that low-income LGBTQ New Yorkers are able to access health insurance and a range of medical services at hospitals and in doctor's offices free of discrimination. Unfortunately, our transgender and gender non-conforming TGNC clients in particular experience significant barriers to accessing those services during some of their most vulnerable moments. They are turned away from emergency rooms, experience harassment by medical providers, are denied access to health insurance because of mismatched identity documents or go without basic medical care altogether because of an inability to pay.

TGNC communities across the country are subjected to similarly degrading treatment, and at staggering rates. According to the largest national survey of TGNC communities in the United States, TGNC people experience devastating levels of discrimination, harassment and mistreatment in nearly every aspect of their lives, resulting in disproportionately high levels of poverty, housing insecurity and unemployment. This is particularly true for communities of color, who are four times more likely to live in extreme poverty and earn less than $10,000 annually. Over half of those surveyed reported being harassed in places of public accommodation, including at hospitals and health centers. Nearly one-fifth report being refused medical care due to their transgender or gender nonconforming identity and almost one-third postponed medical care all together out of fear of discrimination or mistreatment. These social and legal stressors contribute to a documented trend of TGNC communities suffering worse health outcomes overall. 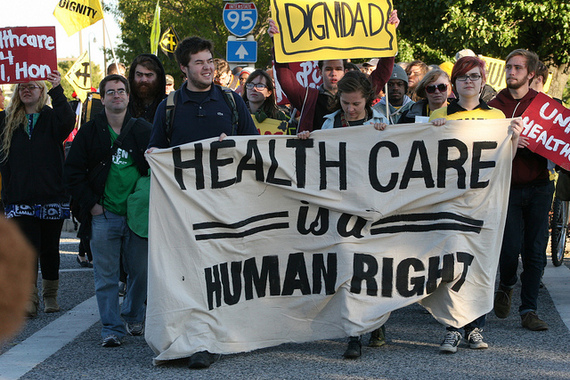 Photo by United Workers / CC BY

Legislatures and agencies in New York and across the country have begun to address these disparities by enacting policies that increase TGNC access to healthcare and remove discriminatory barriers to care that have existed for many years. For example, in May 2014, Medicare officially lifted a decades-old ban on transition-related surgery. In December 2014, Governor Cuomo issued guidance clarifying that private insurance companies in New York can no longer deny medically necessary treatment on the basis of a recipient's gender identity or expression. And even the federal government recently issued historic guidance that prohibits healthcare and insurance discrimination on the basis of gender identity and expression under the Affordable Care Act.

One of the most recent of these groundbreaking victories occurred in March 2015, when the New York State Department of Health removed its decades-old categorical exclusion on transition-related care. NYLAG advocated strongly for the removal of Medicaid's ban and submitted official comments to the Department of Health, urging a broad and inclusive rule. Because our clients are low-income, and most use Medicaid as their primary insurance, this change will have a significant impact on the people we work with every day. However, while removing the ban was a significant and important step, the policy does not go far enough.

Medicaid replaced its exclusion with several exceptions and prohibitions that create unnecessarily burdensome requirements for low-income New Yorkers seeking fully-inclusive healthcare. For example, Medicaid will not allow youth under the age of 18 to access hormone therapy despite a consensus among medical experts that young people and their healthcare providers are fully capable of understanding and addressing these medical needs. The new policy also prohibits many procedures and surgeries that the Department of Health has deemed "cosmetic" but which leading medical experts in the field have deemed to be a vital part of transition for many.

Fortunately, groups like the Sylvia Rivera Law Project continue to fight against the Department of Health in court to remove these restrictions, and NYLAG continues to represent community members most impacted by these changes. We will continue to do this work until the prohibitions are removed and our clients are able to access the medically necessary care that they need to survive and thrive.

Additional information can be found on NYLAG's website about the healthcare rights of TGNC people and what trans-related services Medicare and Medicaid will cover.