It's sort of like "On the Road" except the driver is on my car insurance. And when they finally decide to leave Maine (you're where?!), the driver has a cell phone and can call mom about flat tires, stripped lug nuts and how between the four of them, they're down to $2. OK, so it's not like "On the Road" at all. 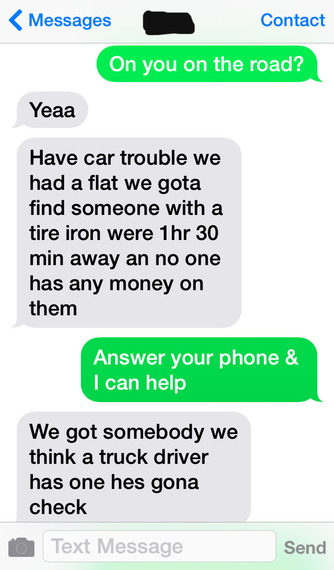 Unfortunately, these aren't college boys on a rare weekend mishap, or wanna-be artists or hopeful visionaries or lost intellectuals. No. These are the kids -- correct that -- these are the young adults -- who couldn't or wouldn't stay in college (pick a reason) or never got there or maybe were never book-savvy anyway and couldn't wait to break free and never really intended to go or stay. So they are just wandering about.

There are plenty of these young people, and there will be more. They grab a job here and there but quickly see that a few hundred bucks a week doesn't get you out of mom's house (or apartment, because she's probably divorced). They see how their boss's boss who drives the nice car has a master's degree in something important -- but he's miserable! He envies the lobsters in the tank -- he told you so himself!

There was a time a kid could choose a crappy career after high school, and still juggle an apartment share, car insurance and an amazing Saturday night. But not anymore. The kids who don't go to college? Good luck to them, and to we their formerly middle class parents, for we are unequipped to deal with this situation. We either came from nice homes where college was expected and paid for (or the proper paperwork filled out), or make-a-living environments, where jobs were simply a matter of a good resume/connection -- and a stepping stone to a lifelong, and hopefully, cushy career.

Either way, we all got, at the very least, the basic Suburban Young Adult Starter Kit: a basement apartment, rusted jalopy, utilities, insurance, phone -- all in our name. Hell, I had a Macy's card at 17; so did my sister. And it was on the merits of having a bank teller job in high school. That simply can't be done today. I'm pretty sure the local coffee shop requires a BS in something.

Today's wandering youth -- the ones who aren't in college and thought 'hey, I'll just get a job' -- have discovered that route isn't an option. These young 20-somethings had parents, like me, that simply didn't or couldn't save for tuition, and didn't know how to motivate their below-average-students for a life of college debt and corporate servitude. Unless there's family money and tradition to go the entrepreneurial route, college-less kids are today's parents' dependants. And the parents, many themselves downsized or removed from careers that in some cases no longer exist, are in no position for permanent dependents; they're still trying to figure out this new math in this new economy. The numbers don't add up.

These happy-go-lucky young adults, not quite understanding that (wait for it ...) cell phones and WiFi access aren't basic human rights, are a bit besides themselves that they can't afford many "necessities" even if they work 60 hours a week. Gone are the days a retail manager could raise a family and get assisted college tuition on top of free health insurance.

The learning-on-the-road is something my son picked up from me, no doubt, and the recent 2:00 a.m., no money, rusted lug nut experience will serve him well someday. But it saddened me this wayward foursome needed an adult with plastic to bail them out of a car jam. The U.S. is no longer a place where people can sleep in the park and ponder what's next, or even in their car until the service station opens. Had I felt safe allowing it -- I considered it -- the police simply would not.

This is America 4.0, where everyone has -- or is expected to have -- a fully-loaded ATM card, even if it's cash-filled at the convenience store. Hanging about with no plans, no car, no plastic -- that's just asking for trouble. Even a cheap motel didn't want these four Bergen County, NJ youth with no plastic or cash. I had to email, scan, e-sign, vouch and plead -- and give my credit card number. Twice. And reassure the motel man the next morning when he called at 7:00 a.m. that, yes, he's still in Connecticut, and this really did happen, and he's really going to get paid.

So much for on the road.

More:
youthcollegeamericaJack Kerouaclearning
Newsletter Sign Up
Raise the kind of person you'd like to know
Subscribe to our parenting newsletter.
Successfully Subscribed!
Realness delivered to your inbox