Hamilton isn't the only theatrical revolution going on in New York. Another smaller revolution unfolds every night during a one-act, off-Broadway play called Straight. Written by Scott Elmegreen and Drew Fornarola, Straight is about a revolution of expectations. One's own. One's friends'. And society's.

Ben (played by Jake Epstein), a 26-year-old Wall Streeter, has been seeing Emily (Jenna Gavigan), a cancer researcher, for five years. At the same time, Ben has started seeing Chris (Thomas E. Sullivan), a 20-year-old guy he meets on a gay dating app. 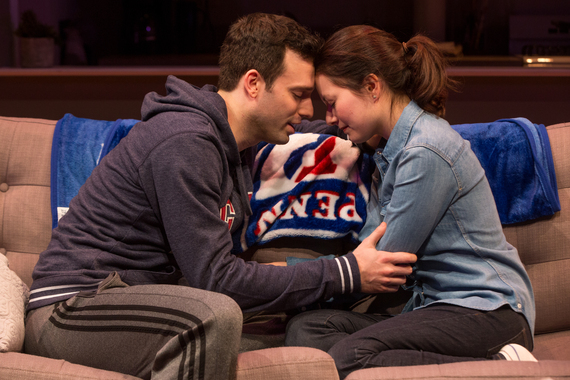 After meeting at Princeton University, where Scott and Drew wrote musicals and a short play together, they decided to write a full-length play. "Sexuality is something that's changing so rapidly in our cultural context, our views of it," Scott told me in a recent interview, "and this seemed like a way to enter the conversation through a lens that really hasn't been explored so much in theater."

Straight (one of whose producers, Bruce Robert Harris, is my oldest friend) consists of three people talking and/or having sex on Ben's sofa. It's a play filled with fears, dreams, and ideas. It's a play about talking that is meant to get people talking.

"One thing that was interesting to us," Drew said, "in addition to writing about sexuality generally, was how people at that age in life make decisions about their life partner. That's one of the biggest decisions that anyone will make in their life. In a very unscientific way, we try to wade through all of the conflicting factors as we try to settle our lives in our 20s. That was something that really interested us."

And gender is only the beginning. "If you take gender out of the equation," said Scott, "different people offer different things in a relationship. You [might] have great sexual chemistry with one person but share similar professional interests with another person. Ben finds himself caught between one set of qualities that he falls in love with, with Chris, but is already in love with a totally different set of qualities in Emily. How do you decide where to go from there?"

Ben's scenes with Emily are very forced. It feels as if the two of them have only recently met and they're are doing all they can to connect. In sharp contrast, the scenes with Ben and Chris are calm, comfortable, natural. It feels as if they've known each other for a very long time -- which is how Ben and Emily should feel, but don't.

"Ben and Emily are trying to keep the ball in the air," explained Scott. "At some point in the last five years they made a commitment, and now that commitment is being put under the strain of Ben discovering that he either wants something more or wants something else."

It's the something else that scares the crap out of Ben, so much so that he can hardly face it. This is the first time he has ventured beyond what's expected of him. He likes it -- but has no idea what to do.

The one thing he does seem to know is that if he ends his relationship with Emily and comes out, everything will change. He knows people will tell him how brave he is for coming out -- and that makes him cringe. I know that feeling. When I came out, that's exactly what many people said to me. But I didn't feel the least bit brave. What I did feel was the need to be honest. Or more to the point, authentic.

"Why is it brave to be yourself?" Scott asked. "Is someone brave for having brown hair?"

This kind of bravery is Straight's central political issue. 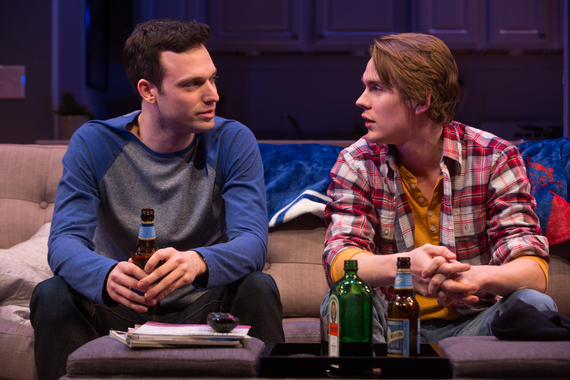 "In the context of all the really tremendous progress we've made toward cultural acceptance of all types of sexuality," he added, "it was interesting to us and important to us to force people to take a really good, hard look at where we are and to take a moment to stop patting ourselves on the back for how tolerant we are, and recognize that even that word -- tolerance -- suggests that there's still something that we're uneasy about."

"'Accept,'" Drew said, "is a very strange verb for what you're asking people to do when you're telling them something about yourself. It's as if they have a choice whether or not to receive that reality."

But Straight isn't about tolerance or acceptance, unless you count Ben's acceptance of himself. It's about infidelity.

"This is a play about what it's like to have two relationships at the same time," Scott said. "Even if we weren't talking about a person who wasn't hiding a part of his sexuality, this is a person who is clearly dealing with something that he is walling his life partner off from. He thinks he can do this, it can be casual, it doesn't have to get in the way of anything else. And [soon], that just stops being a plausible reality. In the final half hour of the play, Ben sees how really devastating his behavior has been to these people. I think that's the moment when he realizes he needs to get his shit together."

In the middle of a very significant conversation about three-quarters of the way through Straight, Chris says, "You don't want to be gay, do you Ben?" And Ben answers, "No, not really." The two lines are set off by silence before and after. The question and answer hang there, a tantalizing bauble that neither mentions again.

At its heart, Straight really isn't about what we are or even what we want to be. After all, no one can choose what they are. All we can choose is what we do about it, how we act once we know. Some will see Ben as an asshole because he isn't honest. Others will see him as tortured soul because he thinks he can't be.