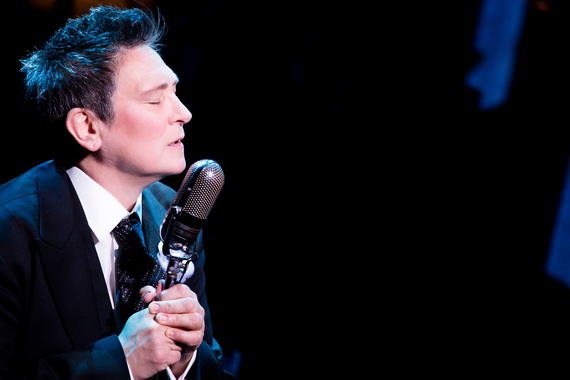 k.d. lang in 'After Midnight'. (Photo by Matthew Murphy)

It was a suit and tie kind of night -- and not just for the soulful k.d. lang who made her Broadway debut as the new guest star in After Midnight.

Before the curtain rose on lang on Tuesday, Ruben and Isabel Toledo, the latter of whom designed the show's vibrant costumes, hosted a VIP soirée at their atelier, or an artist's workshop for the non-French speakers, to celebrate the singer's opening night. The evening was the type of party Carrie Bradshaw would attend -- if Carrie Bradshaw went to theater premieres.

Guests were greeted with a specialty cocktail so infused with cucumber that slices made their way in and around the drink's single ice cube. Waiters sported navy gingham shirts and bow ties and carried meticulously presented platters of appetizers like yellowtail ceviche, artichoke fondue, prosciutto BLTs, and lime-infused salmon. Toledo's costume sketches for the musical revue flooded the lower party room, which was flooded with the city lights. The Empire State Building shone through a tall rectangular window, making it seem like the structure was painted on the wall just for the guests.

The show, which opened to rave reviews in November, welcomes new guest stars every few months. Lang follows Fantasia Barrino, and after lang comes Toni Braxton and Kenny "Babyface" Edmonds. When lang took the stage for the first time to sing "I Can't Give You Anything But Love," the audience erupted with generous applause. The star, who rarely paused to accept her ovation after songs, seemed overwhelmed and unsure how to react to this rapturous greeting. While lang performed the same numbers as Barrino did, her outfits were all her own, from a three piece black suit to a white tux and tails to a golden necktie. And even though the songs were the same, she put her own spin on it, and practically brought down the house with what can only be described as a full-bodied performance of "Zaz Zuh Zaz" with enthusiastic clapping from the crowd and help from the talented ensemble. She also performed "Stormy Weather" and "On the Sunny Side of the Street," soaking up the full orchestra behind her onstage each time.

Tony Bennett has called lang "the best singer of her generation" and has collaborated with the artist many times. For her Broadway splash, Bennett was sitting in the audience. Beaming.