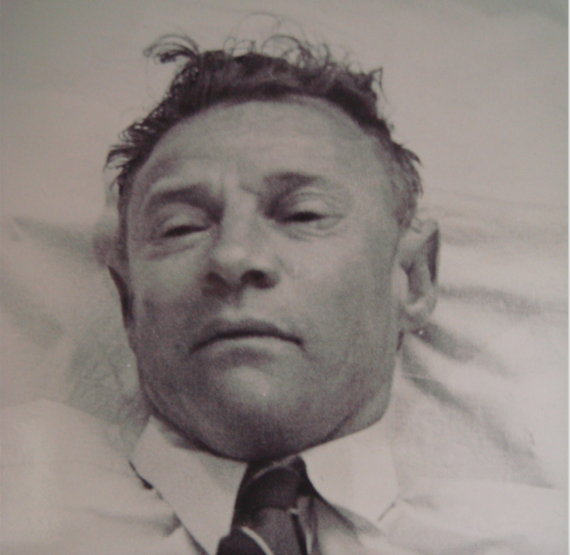 An unidentified man was found dead on Somerton Beach, Adelaide, Australia, on December 1st, 1948. He had an athletic V-frame physique and yet was 40-45 years old. The man wore a smart suit and tie, but the labels were removed from his clothes. There was no ID on the body and there were no signs of violence. The dry sand around him was undisturbed. The mystery deepened when the autopsy was unable to find a cause of death. To this day we don't know who he is or how he died.

Was he poisoned or did he die accidentally? Why were the labels removed from his clothes? Was he a secret agent or a jilted lover? Intriguingly, a slip of paper was found in one of his pockets with the printed words "Tamám Shud," meaning "ended" or "finished" in Persian. It was torn from a page of a book of poetry, The Rubáiyát of Omar Khayyam.

No one reported him missing and no one was able to identify the corpse. In desperation, the police asked the public to check their copies of Omar Khayyam for a torn page. A most surprising break occurred six months after the death -- a local man handed in the correct book. He reported that he found the book on the back seat of his car some six months earlier.

The police found a phone number penciled on the back of the book in tiny handwriting. The phone number led them to a house that was only a short 5-minute walk from where the man was found dead. A 27-year-old woman answered the door. She denied any knowledge of the man and the police found her evasive. The woman told the police that she was married; however, recent investigations have revealed that she was not married until 1950. She told the police that she was a nurse, although new findings show that she had not completed her final nursing exams due to a pregnancy.

As the funeral of the man had taken place, the police took the woman to see a plaster bust that was molded from the cadaver to see if she could recognize the man. She stared at the floor for the whole interview with her eyes averted from the bust. Despite this, the police astonishingly dropped their best lead and agreed to not release her identity to the press. The media referred to her using the pseudonym "Jestyn," although investigators knew her true identity.

In 2013, her daughter came forward on a television documentary and Jestyn's real identity, Jessica "Jo" Thomson (née Jessie Ellen Harkness, b. 1921 - d. 2007), finally became public. She was generally known as Jess Harkness, and then after 1947 as Jo Thomson.

Was the Somerton Man an American?

The Somerton Man possessed a number of items that raise the question of him being American or perhaps having lived in the USA. There was a packet of Wrigley's chewing gum in his pocket. In the 1940s it would have been much more common for a US adult to chew gum than an Australian. The stripes on the man's tie slanted the US way, and not the British or Australian way. The jacket he was wearing was determined to be of US origin, due to the machined featherstitching. The man possessed an aluminum comb -- these were rare in Australia at the time -- and the police indicated that aluminum combs were associated with US personnel.

Here's where the story becomes stranger than fiction: back in 1949, it was noted the Somerton Man had pronounced calf muscles, high up the leg, as if he were trained as a ballet dancer. It transpires that Jo Thomson's son, Robin McMahon Thomson (b. 1947 - d. 2009) became a professional ballet dancer. Is this purely a coincidence? The evidence that Robin Thomson may well be the son of the Somerton Man becomes rather compelling when we find that they share a rare dental trait: they both have their canine teeth next to their central teeth. Moreover, there's a rare feature of the ear shape that both men share.

Full extraction of the Somerton Man's autosomal DNA will not be possible until the South Australian Attorney General gives official approval for an exhumation. This form of DNA allows one to find cousins on a genealogical database. This is how experts find the birth parents of adopted children -- by triangulating the family tree from DNA cousins.

Samples of the Somerton Man's hair exist in a museum, but unfortunately concentration levels of viable autosomal DNA are too low in such old hair. As an initial test, The University of Adelaide team successfully determined that the Somerton Man's mother belongs to DNA haplogroup H.

Sadly, Robin died of prostate cancer in 2009. He was cremated, and so his DNA is unavailable. However, Robin's DNA profile has been obtained indirectly by 'subtracting' the DNA of his spouse, Roma Egan, from his descendant -- this is called phased DNA.

A DNA heritage admixture test shows that Robin possesses a small percentage of Amerindian. Robin's maternal line is well-documented, and so this result points to a paternal American line.

By scanning genealogical DNA databases, it turns out that Robin has a large number of cousins in the USA. More significantly, 40 of the closer matches tend to have roots in Virginia. Some of these are connected to Thomas Jefferson's tree who consistently match with Robin on Chromosome #8. Remarkably, Robin is within the 3rd cousin range to a direct descendant of Jefferson's grandfather, Isham Randolph.

Of course, there is further research to do and the hypothesis that the Somerton Man is American needs further testing and verification. The current overall evidence is sufficiently compelling for investigators to focus efforts on the USA as a key to this puzzle. For example, searches of US-Australian ship's passenger logs, for the 1940s, now become a tantalizing line of inquiry.

How To Help The Investigation

To engage in finding some suitable open historical and genealogical search questions, try Reddit in the first instance. Avoid websites with untrusted sources, to avoid disinformation, as there is plenty out there on the internet.

If anyone in your family grew both their canine teeth next to their two central teeth, and if you have an unresolved male connection in your family tree, anytime between 1900 and the 1940s, then please contact Derek Abbott as you may possibly be part of the solution.

To support the ongoing effort, check out the Indiegogo campaign dedicated to solving this case, and to sign the online petition to exhume the body please visit Change.org.

Derek Abbott is a professor at The University of Adelaide. He specializes in solving difficult problems by applying tools from biomedical engineering, physics, and electronic engineering in an original way. Read more about him at http://www.adelaide.edu.au/directory/derek.abbott, or follow him on Twitter @Derek_Abbott60.