I couldn't even see the sea, never mind any grey whales. The fog engulfed all hope of finding them.

Our time on Kodiak Island had come to nothing, despite advice from a kindly local biologist and the incredible luck we'd had in meeting Alex Otto, a local mum who had volunteered to drive us around and help spot whales from the beaches and cliffs.

My toddler and I had traveled thousands and thousands of kilometers. We were trying to catch up with the greys we'd seen, patted and even kissed in Mexico at the start of their migration, the longest known of any mammal. I was desperate to show him how far the mother and baby pairs had come. But I couldn't afford to hire a boat and we had just 24 hours left of our two-month journey. I turned towards the sound of the surf. It hurt to breathe.

"Let's go," Alex said gently. We trudged across the sand, loaded the three children into her minivan and wound up the hill away from the coast. As we surfaced above the ghostly cloud of fog, an ominous sign appeared. 'Welcome to Kodiak Launch Complex.' We were being treated to a close-up view of one of Kodiak's most classified sites. From there, Alex told me, the U.S. government fires rockets and launches satellites into space. 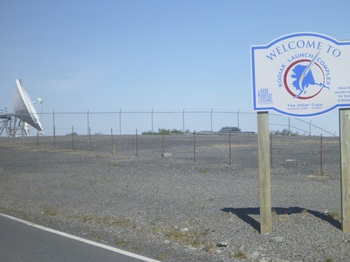 Polaris, Aries, Athena and Minotaur have blasted into polar orbit from Kodiak. As we drove past the base's long low buildings and huge dishes, I felt unnerved. I wondered how much we really knew about what was being tested at the rocket launch site, and, whether the operations affect the whales.

Since we've been, I've learnt a hypersonic test missile launch has taken place and ended badly. The rockets propelling it exploded seconds after lift off and several of the beaches had to be closed for a while last year, causing consternation among some locals.

As we drove on Alex sensed my disappointment and tried to make it up to us, inviting us to her nephew's birthday garden party. Evening drew in with the toddler dancing like a crazy thing in the garden. I found comfort sampling a tower of key lime cupcakes, thrown back into the world of children, surrounded by lovely families and soothing normality.

Alex introduced me to her husband Chris. Kind and bearded, Chris used to spend weeks at sea, fishing for the world famous Alaskan king crab. It's an incredibly arduous and dangerous profession. Faced with a person of such vast experience I felt embarrassed to admit I had expected whales to play ball with my schedule.

"You came all the way here to see grey whales and you haven't seen any? That's bull***t!" exclaimed Chris. This man of the sea surely knew what he was talking about. Alex even told me that once, out fishing, Chris had stitched up his own wound after an injury! I felt vindicated; he could see how wrong it was that, after all my efforts, the whales had let me down.

This was personal, worse than being stood up. How could my whales, that I'd had faith in, had pilgrimaged to see, be so unreasonable? What were they thinking?

While I was busy fuming, Chris had wandered off into the bushes, chatting on the phone. I'd just about managed to cool down and compose myself a little when he reappeared and made an announcement, "We have a plan."

The plan came in the shape of a skiff, about 25 foot long, skippered by Chris' friend, Brian Bruder. He was going halibut fishing the following day. We were all going too and on the way we would make a small detour to the grey whale feeding grounds.

The feeding grounds: the Holy Grail, in search of which the whales and their calves, and my son and I, had traveled thousands and thousands of kilometers. I was awestruck. This man might as well have a direct line to the god of the sea, Neptune himself. And he was on my side. 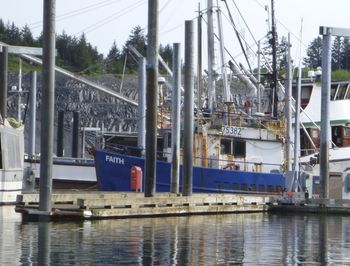 It was an early, cold start among the fishing boats at the harbor the next morning. Was this the day we'd been waiting for? I didn't dare hope. At the back of the skiff, hardly able to speak, I obsessively examined every inch of sea. The toddler stayed up front, out of the wind, 'helping' Brian and Chris drive. 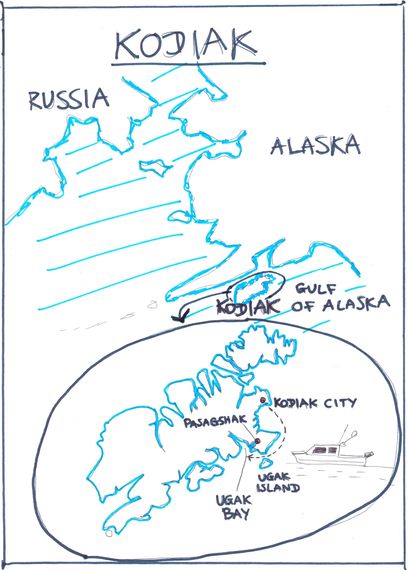 We rounded Cape Chiniak on the easternmost tip of Kodiak in freezing winds. Far off, close to the cliffs that roared open mouthed out of the water, I saw some gargantuan black backs rising up among the waves: "There's your whale!" Chris shouted triumphantly. It felt churlish but I couldn't hide my disappointment that they were humpbacks, not greys.

The boat cruised slowly southwest between Kodiak and the tiny island of Ugak, towards the mouth of the bay of the same name. A gasping blow to starboard. Humpbacks again.

After a few seconds, I realized the humpbacks weren't alone. Not far off, a pair of slate-grey, knuckled backs gently broke water. I froze and held my breath, trying to imprint indelibly on my mind what I'd just seen.

Nothing. Just sea. Could my eyes have been lying? A few seconds, then another blow. I scrabbled for the binoculars. Unmistakable. My barnacled greys were here. It was them. Really them - a mother and juvenile, feasting among the humpbacks.

Signature heart-shaped blows and mottled grey and white humps were suddenly everywhere. "Whale tail," shouted the toddler. Then a chorus. "There." "Look, whale!" "There!" My two-year-old counted five, then five-year-old Tatiana took over and reached 39. 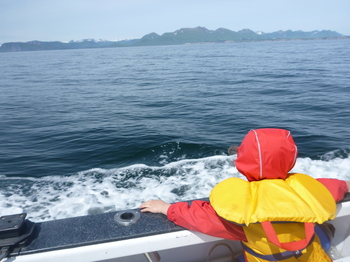 Greys chaperoned us on either side as the boat danced slowly eastwards. I couldn't bear to blink and miss a moment. My eyes stung. I stared, trying to summon some sign that the mother and baby, that beautiful pair we met in Mexico, were there.

I was just two huge eyes, floating in the ocean. I couldn't feel a thing. Every surge of water, every pair of rolling backs splitting the waves, breath bursting the air with spray, sang of life and survival through unimaginable distances and challenges. I glimpsed an eye through the binoculars. They were watching us.

Back on land that evening, we stood at the top of a cliff with the Ottos, still watching the sea for our friends. "Bye bye migration of the grey whales," said the toddler, repeating the mantra he'd heard over and over, as I explained our journey to everyone we bumped into. Then he got more personal, speaking softly, "Bye bye whales. Thank you for coming." 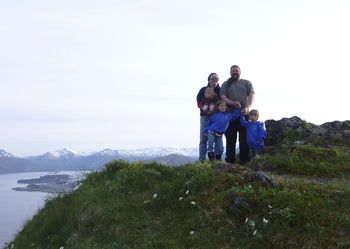 We left Kodiak at four in the morning. Our amazing rescuer Alex once more got us where we needed to go. As we were rocked to sleep by the ocean on the Kennikott ferry I thanked the whales again, this time for having introduced us to such amazing places and extraordinary people during our journey. People like Alex and Chris, who were capable of such generosity, openness and selflessness towards travelers like us.

On the deck the next morning, I took a walk in the cold, salty air with the toddler, trying to shift the veil of melancholy that had descended on both of us at the thought of returning home. We looked out to sea with bleary eyes. Shapes appeared among the waves to port side. The shapes seemed to be coming straight for us. By now I could spot them a mile off. A pair of greys. As they approached the side of the boat, they blew glittering hearts of steam and spray up into the air in unison. I had time to gasp. Then they dipped under the ferry and were gone.

There was no doubt in my mind that these were the ones we were looking for, the ones we'd met at the beginning of our journey. I told the toddler they'd recognized us and followed us, to say goodbye. Who could convince me otherwise?

With the journey over, I struggled to let go of our whales for a long time. I kissed them. My son patted them. They came when he sang. Life on dry land felt dreary in comparison. 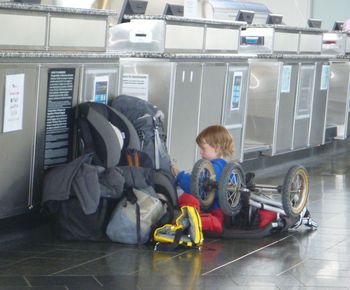 Sometimes, I'd feel a stir in my consciousness and catch a hint of existence on an entirely bigger scale. The color of the dappled deep murk, rising to the surface, came to mind. I'd find them fleetingly close and then feel their absence, and a call that pulled me to the other side of the world.

A year on, I no longer feel sad about the journey ending. Somehow, I find I've more stamina than I used to. When life's knocks occasionally make me wonder which direction I'm heading in, light always seems to penetrate from not too far up ahead. It's like the whales are murmuring, keep going and you will find your way. You're on your journey and that is your home. I take a breath, dive back in, and let the wild waves and storms wash over. 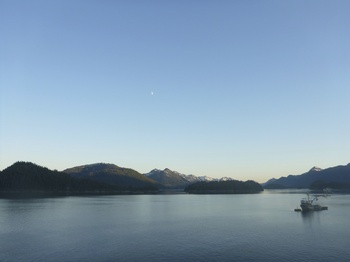