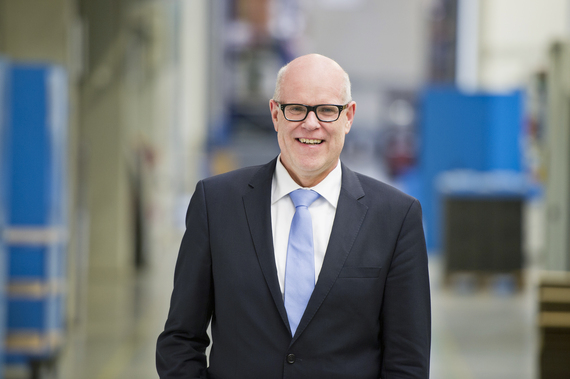 Rainer Hundsdörfer, Chairman of the Board of Directors of ebm-papst, on the effects of climate change and decarbonizing the economy before the Paris Climate Conference in December

Mr. Hundsdörfer, in Germany this summer, the heads of state and government of the seven leading Western industrial countries (G7) resolved to decarbonize the economy by the end of this century, calling for the world to completely discontinue its use of coal, oil and natural gas. A political illusion or a global vision?
A vision that's becoming reality. Climate change is the biggest global risk. The people know that and business is reacting accordingly. Global energy investment is showing a clear trend toward renewable energy. In 2014, 270 billion dollars went into the expansion of wind, solar and hydroelectric power. That's far more than was invested in the exploitation of fossil fuel sources. So it's no longer a question of "whether" we have an alternative to decarbonizing our economy, it's a question of "how" we do it and "how fast" we succeed.

The biggest emitters are China, the United States and the EU. They are responsible for more than half of all CO2 emissions. Will they agree to a binding approach?
It can't work without China and the United States. These two countries are responsible for more than 40 percent of all greenhouse gas emissions. But both countries are also among the biggest investors in clean energy. I travel to both countries frequently, so I'm sure that the United States and China are increasingly viewing themselves as partners for global climate protection. U.S. president Barack Obama has declared climate protection to be a top priority. China plans to launch a national emissions trading system in 2017. The former laggards are now leaders in global climate policy.

Germany began its energy transition four years ago, following the reactor accident at Fukushima. Is this project a model for other countries?
Germany is a test lab for countries that need an energy transition much more urgently than it does. The energy transition "made in Germany" is considered a model worldwide today. With its rapidly growing population, Africa will be affected by climate change much more than many others. Looked at this way, the energy transition is an essential tool of foreign aid and international cooperation. For the emerging economies and developing countries in particular, there is only one chance: the development of renewable energy and especially the more efficient use of energy. In the industrialized countries, the word is out that energy efficiency saves money and creates jobs. Energy efficiency offers the most cost-effective way to reduce our energy use and ensure a constant energy level.

Your company is active in Germany, the United States and China. What experiences have you made there? Is climate protection an issue for businesses and citizens?
In the United States, public pressure to do more about climate change is growing, partly as a result of natural disasters. That affects both people and businesses. The U.S. government has reacted to this change of sentiment and plans to introduce regulations aimed at increasing energy efficiency that are very similar to the regulations here in Europe. The cost pressures are higher than they are for us, so energy efficiency has to pay off faster. In China, the people are also pressing for solutions. Severe air pollution is becoming the main problem. With increasing prosperity comes greater demand for better health and a more intact environment. The market volume for environmental technology and resource efficiency is going to double overall in the next 10 years.

What responsibility do business and industry have when it comes to the monumental challenge of climate protection?
The main challenge is to decouple economic growth from the consumption of resources. Until now, economic development has involved burning coal, gas or oil. In 2014 we had the first year in decades in which the global economy grew but the emission of greenhouse gases decreased, and business made an important contribution. It will be crucial for us to make more progress on energy efficiency. All studies on decarbonizing the economy call for a drastic increase in energy efficiency. But not just industry is affected. The generation of heat and electricity is responsible for the majority of the emissions. In the future, our climate policies will need to focus more on the demand side. After industry, private households are the biggest electricity consumers. Heating, hot water, cooking and cooling add up to nearly 100 percent of private energy consumption. Energy-saving renovation of buildings is an issue that should be at the top of the political agenda. Climate protection depends on local implementation, so it starts at home.