Labor Day is a time to celebrate the essential contributions workers make to our collective wealth and wellbeing. It is well past time that American workers receive their fair share of that wealth.

Americans work extremely long hours and are incredibly productive. Yet, for the last three and a half decades, they have not received the just fruits of their labor. From 1948 to 1979, two-thirds of aggregate income growth in the United States went to the bottom 90 percent. But from 1979 onward, nearly two-thirds of growth went to the top 1 percent. Meanwhile, the aggregate income of the bottom 90 percent actually declined! 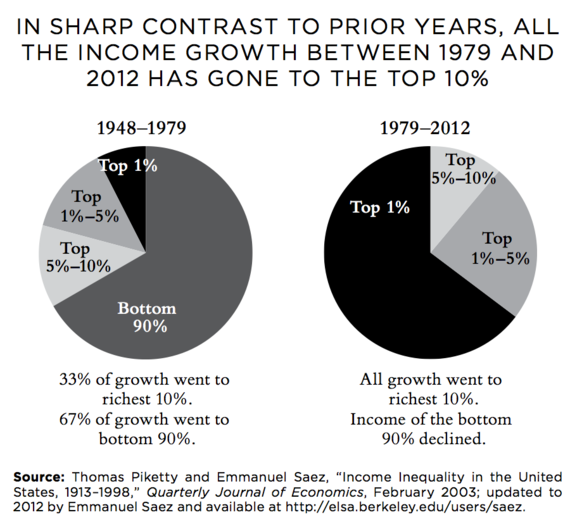 We are the wealthiest country in the world at the wealthiest moment in our history. Shamefully, we have tens of millions of people living in poverty. The middle class is being squeezed out, caught between those with unprecedented wealth and those who suffer food insecurity, who go to bed hungry.

This rising and perilous income and wealth inequality did not happen by accident. It is the foreseeable consequence of a persistent upward redistribution of wealth, resulting from decades of public policies that favor corporations and the wealthiest Americans over everyone else. These public policies constitute a war on workers. Attacks on unions, privatization of public functions, huge tax breaks for those at the top, deep cuts to domestic spending, weakening of regulations protecting workers, an eroding minimum wage, and attacks on our Social Security system are all part of the war. Predictably, they have resulted in stagnating wages and longer hours for everyday workers, and the income and wealth inequality we see all around us.

Fortunately, workers can help themselves this November 8. Hillary Clinton and the Democrats have concrete plans to reverse these destructive policies, stop the upward redistribution of wealth, and make sure that workers receive their fair share. In sharp contrast, Donald Trump and the Republican Party have concrete plans to double down on the war on workers.

The stance of the two parties and their presidential standard bearers are well exemplified by their divergent Social Security positions.

In their new book, Stronger Together, Hillary Clinton and Tim Kaine identify and repudiate the "years of mythmaking, claiming we cannot afford Social Security and that the only solution is to cut the benefits on which 90 percent of American seniors rely."

Hillary Clinton, Tim Kaine, and the Democratic Party advocate expanding Social Security's modest but vital benefits. They recognize that an expanded Social Security is a solution to many challenges facing the nation, including a looming retirement income crisis and our immoral, destabilizing income and wealth inequality.

In contrast, Donald Trump and the Republican Party want to cut and privatize -- that is, dismantle -- our Social Security system. While Donald Trump promised during the primaries that he wouldn't cut Social Security, this is clearly a lie. Immediately after he clinched the nomination, his top policy adviser told a closed door meeting, that Trump would indeed be open to cuts, the Trump campaign is filled with policy advisors who support cuts, the Republican Platform advocates cuts and privatization, and Trump's past statements, prior to running, advocate cutting and privatizing the program he slanderously labeled a "Ponzi scheme." He apparently understands the politics though, having warned Republicans in 2011 that openly advocating cuts to Social Security would cost them at the ballot box.

Clinton's book title and her campaign rallying cry, Stronger Together, could be used to describe Social Security. Stronger Together describes perfectly Social Security's conceptual underpinning. Social Security recognizes that all of us face common economic risks. Rich or poor, any of us can die prematurely, leaving young children behind. Rich or poor, any of us can suffer a devastating, disabling accident or illness. Rich or poor, all of us hope to grow old. When we do, we need, for a dignified and independent retirement, a guaranteed steady income which we cannot and will not outlive. Social Security recognizes that the best way to protect ourselves and our families against the economic consequences of those risks is to join together and pool them, sharing both our risks and our responsibilities. Stronger together.

Under the powerful watchword, Stronger Together, Hillary Clinton and the Democratic Party advocate raising the income and improving the economic security of every one of us, while eliminating gender and racial income and wealth inequalities. In stark contrast, Donald Trump and the Republican Party scapegoat, seeking to turn us against each other - against immigrants, against Mexican-Americans, against Muslim-Americans. Keep us divided, so we are too weak and distracted to fight together for what we have earned.

The Republican divide-and-conquer strategy is nothing new. President Franklin Roosevelt recognized and confronted it, when, a few days before the 1936 presidential election, in a speech defending Social Security against vicious and misleading attacks, he proclaimed, "It is an old strategy of tyrants to delude their victims into fighting their battles for them."

That strategy is alive and well in the person of Donald Trump.

In the election of 1936, Americans understood who was with them and who was not. After their electoral victory, Roosevelt and Democrats in Congress successfully fought for laws providing a federal minimum wage, maximum hours, and protection of collective bargaining. They succeeded in increasing Social Security's benefits and expanding its protections to the families of workers.

Like workers in 1936, today's workers should see that the Democratic Party and its presidential standard bearer are with them, while the Republican Party and its presidential standard bearer are against them. If today's workers, like those in 1936, recognize the truth and vote accordingly, the Democrats will win on November 8. Armed with that victory, Clinton and her Democratic allies can fight to increase the minimum wage, expand Social Security, and improve worker security, rights, and wellbeing in numerous other ways. That will be something to celebrate for many Labor Days to come.