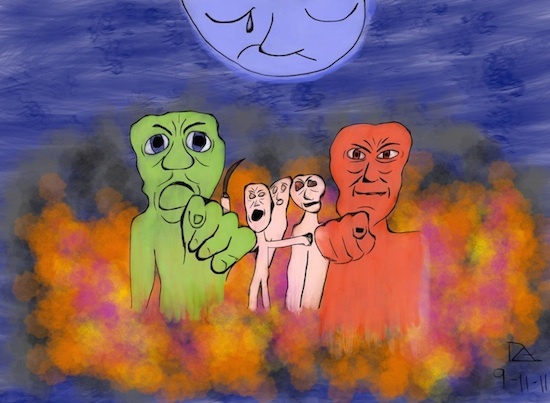 I struggled to write this article. I was imagining people scouring the article for every little thing I did wrong. I was constantly questioning the worth and validity of what I had to say. I'm still doing it as I write this. This can be paralyzing because every word gets weighed down with so much scrutiny.

I painted this in one long painting session on 9/11/11, the tenth anniversary of that nightmare of day that was, in many ways, an extreme example of what can happen when we practice judgement and blame instead of love and understanding.

I was preparing for a court appearance that was set for the 15th. My attorney had assured me it was no big deal and, intellectually, I believed him and agreed. Emotionally, it was a different story. I was feeling an intense amount of anxiety which far exceeded the reality of what I was facing.

Images are generally the language I use to understand and express my feelings. That is why I paint. So, when I started asking myself why I was experiencing so much anxiety, an image emerged in my mind. A man was standing up on the witness stand pointing at me from across the courtroom as the courtroom crowd looked at me with disdain, as if I were to blame for whatever crime had been committed (in reality, there would be no courtroom, no witness and no witness stand. Just a table and a guy in a suit).

As I began to sketch the scene above, something very different emerged. It wasn't anything like the original image that came to me but it more accurately depicted how I felt.

My wife, Anna, has been one of my great teachers, especially when it comes to art. One of the most important things she taught me was that the art happens as the initial idea moves through your body into whatever medium you're using. It doesn't have to look like the vision in your head-imperfections can be gateways or access points to deeper feelings.

The deeper feelings in this case were the red and green monsters; the ringleaders and inciters of the crowd. These monsters could be your aunt or the media or leaders of countries. Their fear and pain is so great that, instead of trying to look within to confront that fear and pain, they cast it outward in the form of judgement, hatred and blame. Sometimes we do the same thing to ourselves. Instead of looking within ourselves with love and compassion, we cast blame upon ourselves for being too much of one thing and not enough of another.

Whether it comes from the outside or inside, and whether we rebel against it or internalize it, judgement gets in the way of us being the fullest expression of ourselves and of seeing the same in others.

At the top of the painting, the moon represents the way out: expression. When emotion arises within us, there is an impulse in the body to release that feeling to cleanse itself and find a new equilibrium.

When the unexpressed emotion builds up, our bodies get distorted and so do our perceptions. The body distortion is usually quite subtle; a tightening of a muscle in your neck, for example. As the tightening increases in size and intensity, it cuts off blood flow to the brain. Communication between the mind and body is compromised. That's why you might walk into a massage or yoga class stressed out of your mind and walk out feeling like everything is okay. Nothing changed in your circumstances but everything changed in your perception.

Judgement is a way to categorize and dismiss; to separate from ourselves and each other and move away from intimacy. That loss of connection causes most people to, as Henry David Thoreau said, "lead lives of quiet desperation."

There is another way. Let your truest, deepest self be seen and when other people show you theirs, look deeply.

"Love is made of a substance called 'understanding,' and understanding is the outcome of your looking deeply." - Thich Nhat Hanh

Note: this painting features Augmented Reality (AR) via my app, which you can download via a link on my web site. When viewed through a smart phone or tablet, fire engulfs the image. Move your device closer to the image and the shouts of an angry crowd get louder. Tapping the moon, tears begin to fall; the expression of the moon extinguishes the flame and the noise of angry crowd. Understanding and expressing our emotions will extinguish judgement for ourselves and others.