I have been forced to come to a hard-pressed realization that makes my shoulders fall, and my heart heavy: I am falling out of love with Wes Anderson.

For a long time now, I have outed myself with happy enthusiasm as a Wes Anderson lover. Even, at times -- and perhaps more sheepishly -- something of a fangirl. I own his new coffee table book by Matt Zoller Seitz, I see new releases opening weekend, and yes, I have considered being Margot Tenenbaum for many a Halloween gathering, though I always seem to go a different direction in the end (I have wavy brown hair, and a bobbed wig -- well no, that wouldn't do).

Perhaps this is the danger of loving something very deeply and vocally. When you love something deeply, you notice, with pangs of regret and small crumblings of hope, each missed opportunity, each tiny disappointment. Slowly, these little details begin to chip away at your love. But still, if you are a loyal lover, as I am, you hold out for hope. Hope is, as all who have loved and lost know, that misty, self-created sparkle in the wind that when you are in love, you grasp for, gesturing at it with flailing arms, declaring that all is not lost. The Royal Tenenbaums (2001) is this small bit of hope that I point to. It is the "remember when" that keeps me looking starry-eyed toward every approaching encounter and flirtation.

Viewed at age 13 in a suburban New Jersey Cineplex, The Royal Tenenbaums more or less baffled me, and then, some years later, moved me intensely. No more than a foot from the screen, my knees tucked beneath my weight, I devoured every detail: each colored shirt, each patterned wall, each gesture. I clutched my heart, as 16-year-old girls are wont to do, and felt the subdued heartbreak, melancholy and loss of these somewhat exotic characters. A decade later, Tenenbaums still remains my favorite in Anderson's body of work. And it lives in a profoundly fixed place of love and also hopefulness, to which I cannot seem to find my way back to.

And so it is a disorienting thing to fall out of love. The disenchantment for me began, I think, with Moonrise Kingdom, 2012's release that was nominated for the director's first Academy Award (in the Best Original Screenplay category). I was aware of my disappointment in this film mostly by my experience of a contrast -- there is but one scene in the whole of that undeniably sweet and well-written film that gave me a taste of that hope I speak of. Awake in their parallel, untouching beds, Mr. and Mrs. Bishop (played by Frances McDormand and Bill Murray) stare at the ceiling. Mrs. Bishop apologizes to Mr. Bishop, to which Mr. Bishop replies, "It's not your fault. Which injuries are you apologizing for? Specifically." Mrs. Bishop replies, "Specifiaclly? Whichever ones still hurt." Mr. Bishop then coolly wishes for their roof to fly up, sucking him into space. The quiet of this scene, the ringing desperation -- it hurts.

It is one of the few moments in this film, so full of hurtling action and frothy moments of young love, that actually has a pulse, hushed as it is. At the time, I attributed this to the fact that in a film largely occupied by children, I simply craved more "adult" content. I wanted that mid-age melancholy, that cosmic crush of living. 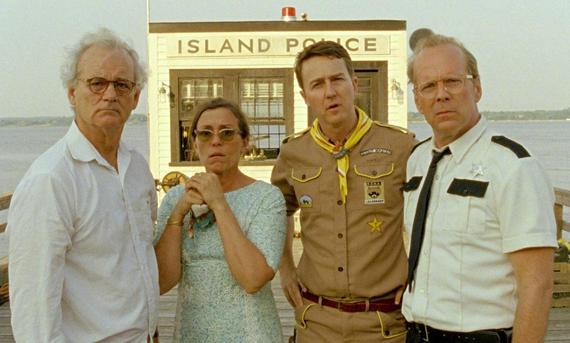 Now, this idea -- of this scene being the only with a pulse -- will certainly rile some people up. After all, Anderson's films are without question full of life and verve -- tons of action, color and patterns galore, reliably killer scores. The art direction practically heaves, the color palettes of scenes dancing and thumping in the spectator's field of vision. Characters are painstakingly anointed with any number of quirk, affect and distinguishing characteristic. However, the root of my discontent is the lack of any depth to these characters.

It wasn't always so. In 2000, Martin Scorsese lauded Wes Anderson for knowing how to "convey the simple joys and interactions between people," noting that this "delicate" and "human" sensibility is rare in movies. He was speaking specifically of Anderson's debut film, Bottle Rocket (1996). Later, in casting The Royal Tenenbaums, both Gene Hackman and Anjelica Huston reportedly refused their roles as the heads of the Tenenbaum household until additional scenes providing more character depth were written into the script. They eventually accepted, and their characters live on as wonderfully rounded and heartfelt. At that early phase in Anderson's career, it doesn't seem at all unlikely that big-name actors such as Hackman and Huston would make these types of demands. But today, amidst mainstream and critical fanfare, are the parties involved simply less demanding, less discerning? Are they more interested in just having a good time?

It's hard to say -- but The Grand Budapest Hotel definitely is a good time. The story follows the death of a wealthy old woman (Tilda Swinton) and ensuing embroilment over willed goods to a play-boyish hotel concierge (Ralph Fiennes), all amidst swelling conflict in a small fictional town in 1930s Europe. The narrative has a quickness and compression to it that is Anderson's comfort zone, skipping through time periods and cobbled streets with ease, introducing characters and then simply killing them off.

The technical and aesthetic elements of the film are impeccably calibrated and exacting. The art direction is, perhaps to a fault, perfect. The sets are lavish, their pastel and gilded palettes -- whether sparkling in 1932 or in picturesque, crumbling decay in 1968 -- appear clipped from a luscious Parisian patisserie. The sound editing generates laughs (the squeak of a gondola scaling a mountain perfectly, comedically in tune with the soundtrack swells), and the editing is swift, much like being tied to the wrist of a frenzied carnival-goer, weaving purposefully through the merriment and attractions. I do not hesitate to admit that I quite enjoy all of it. As far as stylistic maturation goes, no one can deny that Anderson's mastery of these elements has been full flush. 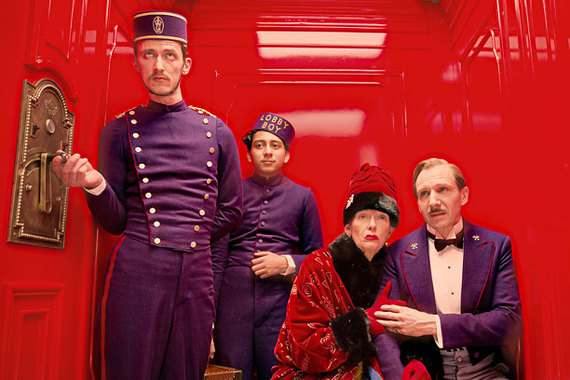 However, it is the heart that is missing here, yet again. The film is liberally peppered with incredible actors, yet they all register as wooden. Under Anderson's direction, Ralph Fienne's M. Gustave is a flashy and sometimes, sometimes, tender hoot. It is in these spare moments of tenderness, alongside the young lobby boy, Zero (newcomer Tony Revolori), that I so wish Anderson would have basked a bit longer. There is also an understated sadness and soulfulness to F. Murray Abraham's performance of an aged Zero, now the proprietor of the outmoded Grand Budapest, but this role serves as a mere framing device for recounting the action of the story. Instead of giving these characters the space they so deserve, Anderson is obsessed with the token celebrity cameo (a Who's Who of ensemble casting with Adrien Brody, Tilda Swinton, Bill Murray, Willem Dafoe, Jeff Goldblum, Jason Schwartzman, Edward Norton, Lea Seydoux and more, all serving as tactical storytelling cogs) and the well-timed comedic gag. In a way, I find Anderson's recent work to be treading a line of slapstick comedy, with each bit of dialogue, expertly written as it is, delivered to a dangling punch line, and edits and action executed to produce a giggle or a short-lived, soon-forgotten gasp.

Perhaps this is the point, and Anderson is using the rampant irony and frivolity to foil the geopolitical backdrop of war a-brewing throughout the narrative. However, he has been leaning this way as a storyteller for some time now. In Moonrise Kingdom, ex-boy scout, Sam, being chased through a field by assorted enemies and a cold-hearted Social Services agent during a raging storm, is struck by a bolt lightning. Into the air he flies, much like an animated figure cut from Anderson's 2009 foray (and a brilliant one, at that) into stop-motion animation, Fantastic Mr. Fox. While such gags work with furry, whirly-eyed animals, the effect is a little bit alienating in a live-action film, with actual humans.

Someone, a fellow Anderson admirer, suggested to me that these more recent projects bare a broken heart and disillusionment on the part of their creator. This individual also challenged me to question whether or not I would enjoy these newer, technically flawless but somewhat heartless and hygienic projects more, without The Royal Tenenbaums serving as gatekeeper to what I so love about Wes Anderson. It's certainly possible. But there it is, and there they are.

It seems that Anderson has found his stride -- and it is a gorgeous and desperately swift stride, to be sure. Maybe, like it was suggested to me, he is simply in a place of shunning his own heart and humanity, exploring, instead, the caricatured, disconnected and disengaged nature of human relationships. I can only hope that he finds the time and space to return, to stop and stay a while in those moments of self-reflection and pause. After all, given the choice, I would choose a lover with heart over one without a single flaw.