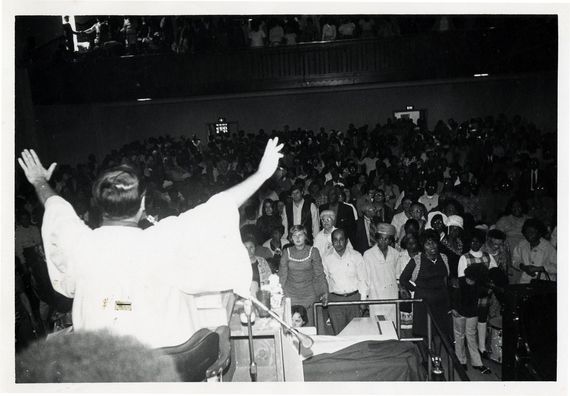 He was a charismatic white preacher-activist who could riff on the racism of the Bible one moment and the virtues of radical black liberation struggle the next. Elderly black women were his most cherished audience, and he counted Huey Newton, Angela Davis, activist publisher Carlton Goodlett and prominent black politicians Willie Brown and Mervyn Dymally among his supporters. It's been said that when the Reverend Jim Jones took his parishioners' hands and looked deep into their eyes it was like they were the only ones in the universe.

Although many commentators have drawn parallels between former Spokane NAACP head Rachel Dolezal's passing-in-reverse minstrelsy and white pop culture icons, the historical example of Jim Jones and his Peoples Temple church is more germane. In the packed annals of "White Negro-hood" Jones' appropriation and manipulation of blackness represents an especially insidious brand of political minstrelsy. For both Jones and Dolezal, racial stagecraft earned them real dividends in terms of income, credibility and access to policy makers, politicos and the activist black community.

Years before he relocated the Peoples Temple congregation from San Francisco to the eponymously named Jonestown settlement in Guyana Jim Jones was an undisputed rock star--a black-identified white man and respected public official who was also a closeted bisexual. Peoples Temple championed the Black Panthers, the American Indian Movement, affirmative action, anti-police brutality initiatives, affordable housing and LGBT equality (most notably vis-à-vis the infamous 1978 Briggs initiative, an unsuccessful law that would have prohibited gays and lesbians from teaching in public schools). Back then there wasn't a radical-progressive issue the church didn't espouse or go to the barricades for, regularly pushing back against the city's segregationist power elite in rallies, editorials and political campaigns.

In his very public private life, Jones' performance as revolutionary Elmer Gantry in blackface was unequaled. He adopted a black son in 1959 and named him Jim Jr., paraded around his "rainbow" family of orphaned children and held court in the city's multiracial Fillmore District as a white "black" man who proudly referred to himself as a "nigger". Throughout the Peoples Temple movement, Jones, like Dolezal, speciously claimed to have received death threats and been the victim of racial harassment.

Indeed, racial persecution was one of the ostensible reasons for the church's relocation to Guyana, dubbed the "Promised Land". Jones incited fear of an impending race war in the U.S. (in which black people would be sent to concentration camps) to justify emigration and keep members from leaving the jungle settlement. Rallying Temple members on the notorious Jonestown "death tape" of November 18, 1978, he beseeched "Are we black proud and socialist?" The question was couched in an overripe narrative of white betrayal in which Jones blamed white conspirators for bringing down Jonestown.

So while Jones didn't technically "pass" as black like Dolezal, his fierce identification with the lives and struggles of his parishioners was definitive. In their view, Jones' version of blackness was no facile lifestyle choice, fetish or "missionary" calling but a full-bodied identity that spoke to their legacy of resistance. It was this belief that ultimately blinded some to the church's moral corruption, setting the stage for their complicity with Jones' authoritarian control.

When Jones and his Temple faithful ordered members to drink the toxic mix of flavor aid and cyanide that would kill over 900 people in the settlement, he was in full flaming White Negro-hood. Death, it was believed, would be the community's final "revolutionary" resistance to the evils of racial apartheid. Jonestown and Peoples Temple's tragic end are a cautionary tale of the price the African American community has paid for political minstrelsy and reverse passing.