Every video I make with my iPhone to share on Facebook for an average of 23 likes is born with a short and uncertain shelf life. If I don't post it immediately, chances are it won't make it to the Wall. I'll decide it's not worth keeping or there will be a terror attack or a racially charged killing commanding the internet's attention that would make releasing a micro short of me dancing at a Hanana frozen yogurt shop feel dirty.

The nihilism I was able to cultivate as a teenage white boy in the suburbs is more cosmetic than anything. It's getting harder for me to shrug at the headlines spit out by Apple News, that app that sends us notifications whenever there's new light to be shed on the cheapness of human life. I don't post the videos on those days that feel the darkest, when the internet is in tune with any number of tragedies. Being silent for the bereaved is in line with some code of etiquette, surely.

The moral climate on my side of Facebook, however, has me questioning my inactivity online. Deferential silence is still silence, and some of the progress hounds sniffing me out of my foxhole are keen on calling it the White kind. And why not? I'm not basic enough to subscribe to White Denial on one hand or White Guilt on the other, but White Silence, as a form of compliance, is the best idea progressives have repurposed in recent memory. And here I am, writing this, trying to work out some kinks.

There has been a rash of status updates in my network encouraging the straight-white-male facet to be more active in conversations, and I've seen plenty oblige, including myself. At the heart of this sub-movement are grief mongers and compassionate progress hobbyists who argue that if we can change the hearts of enough right-wing relatives who see our commentary bubble up in their backwater news feeds, we can make a real difference. It's a nice idea, and I admire the good people out there who are desperate to help in the healing, but a lot of the dissertations I'm reading on social media make me as uneasy as ever about the culture I'm in bed with. Is circumstance marrying me to these shills? 'Systemic injustice' is sounding less like a buzz phrase and more like a reality I shouldn't be ignoring from inside my bubble. And I'm ripe and ready to lend my resources to the greater good, but I don't want to do it by joining the fanatics on the frontlines who are standardizing Good Guy language and seeking out the villains they rely on to define themselves.

If I ever feel compelled to join in on the ideological front of any of the wars people are fighting online, I reexamine the rules of engagement and lose any interest in enlisting. Do I have to make solidarity posts every time there's a massacre? Do I have to repackage the solid points I pick up on my newsfeed and spell out the vileness of people who trivialize footage of black men being murdered by questioning whether the victims made criminal missteps? Should I look for as many synonyms of 'abhorrent' as I can find, so I can put my distinct stamp of horror on each tragedy? Does weighing in on reformative Facebook conversations with Alliance essays help raise the right kind of awareness or does it just compromise my Wall's apolitical aesthetic for the social benefits of giving the nod to My People. "Yes, I'm with you. I'm just like everyone, in fact- a cell with confirmation bias, unwittingly performing some function for the self-mutilating whole." The Progress hounds might argue that this isn't about something as base as upholding my image - it is about using my privilege to help the disenfranchised. And that sounds good to me, but if my online voice has any influence over my 23-some-odd likers, I imagine it's because it's my own. 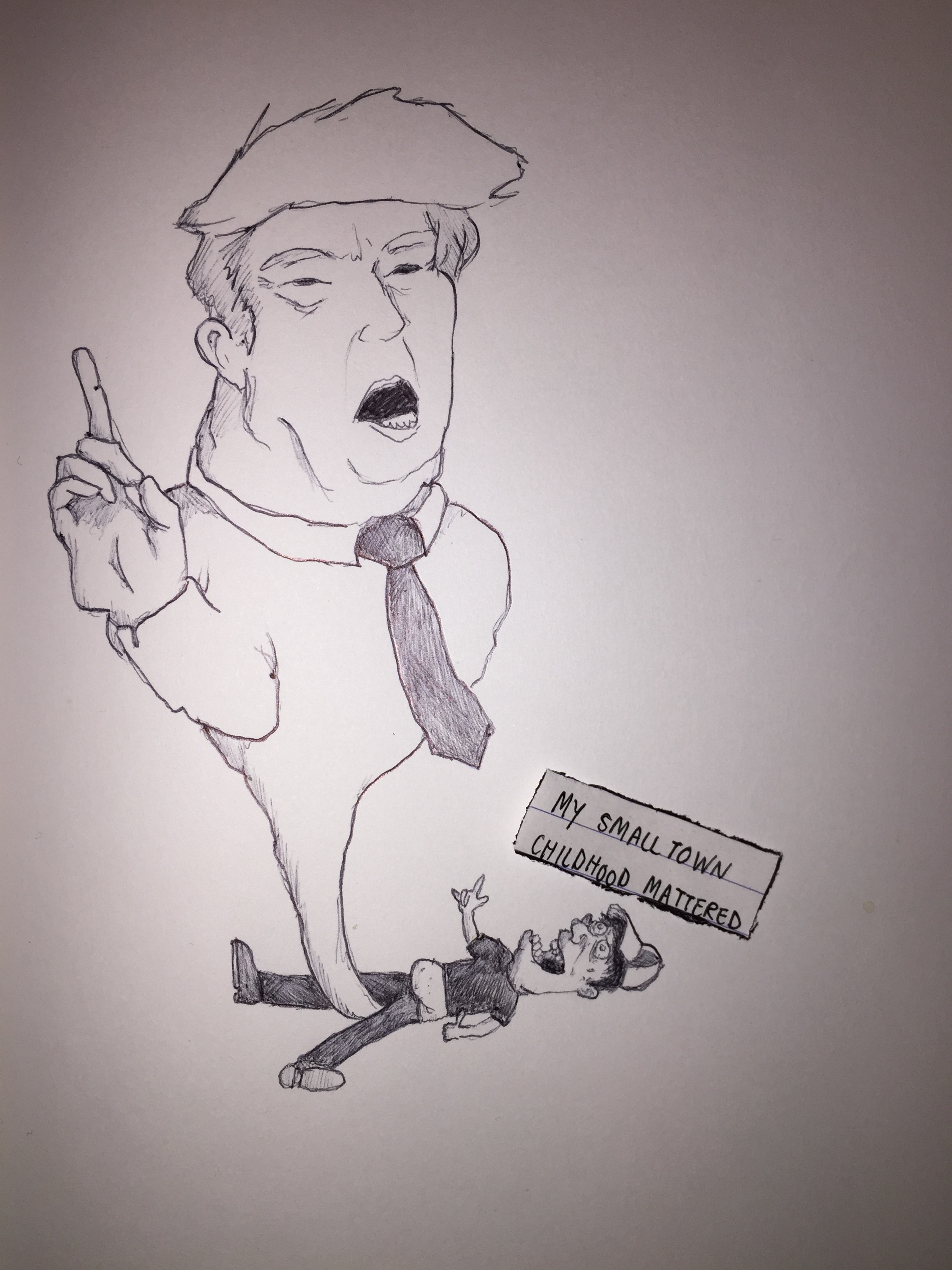 But what do I know? Maybe it's time my voice changed altogether. Maybe my newsfeed is what evolution looks like. Here I am, pushing my own brand of rhetoric on people who actually have the time to read this self-indulgence. Maybe if I just shut up and take to Facebook with an air of fashion-forward vulnerability, I can start rising through the ranks of status updaters on a pillar of civic likes. Yes, then maybe those likes will translate into more views for my vids.

After the Orlando shooting, I was galvanized by one thread to make a sincere post touting my alliance with the LGBTQ+ community. When Alton Sterling was shot to death, I was disgusted enough to see that genre of murder play out in front of us again that I almost broke my own curatorial code with a cookie-cutter "I can't be silent anymore" post. Almost. My aversion to blowing the same horn everybody is passing around and potentially coming off as an opportunistic moral posturer, using a tragedy as a platform to showcase what a great example of a Sensitive White Man I am, kept me from writing anything. I shared a Shaun King article on my wall instead, and no, I wasn't looking for a cookie. I knew sharing the piece was a grossly insignificant gesture, but it was something I could do that day to keep myself from feeling like I was on the wrong "side" of things. Then Philando Castile got murdered, and I took a few days off social media.

There are voices in my head, pulling me in different directions. The progressive collective consciousness is asking me what I'm waiting for. "Use all means necessary to tell the simpletons who rally behind All Lives Matter that they're reducing a conversation about trends in the criminal justice system to a caveman's semantics debate. Tell them how apparent it looks that they are moved enough by a fear of black people gathering in large numbers that they spend their time and energy organizing lighter-skinned gatherings." In another corner on the same side of the room, there's Maslow who says I'm at the top of his pyramid. "Actualizing yourself in the moral sphere is a natural, self-serving thing for you to do at this stage," he tells me. "So why not go for it?" Then there's the skeptic, who has a hard enough time trusting one person at a time to be giving an entire movement of people a ringing endorsement. The skeptic is cringing at this photo of Matt McGorry. "Is Mr. McGorry equal parts noble and opportunistic or does he lean more to one side?" I will never know, and my fear of being in a position where people may ask the same of me is enough to keep me silent on plenty of issues. "Hey man, we never branded ourselves as noble, and at least we're honest about being opportunistic," says the cosmetic nihilist in the far corner. "Now, why don't you go pick us up some cigarettes?" 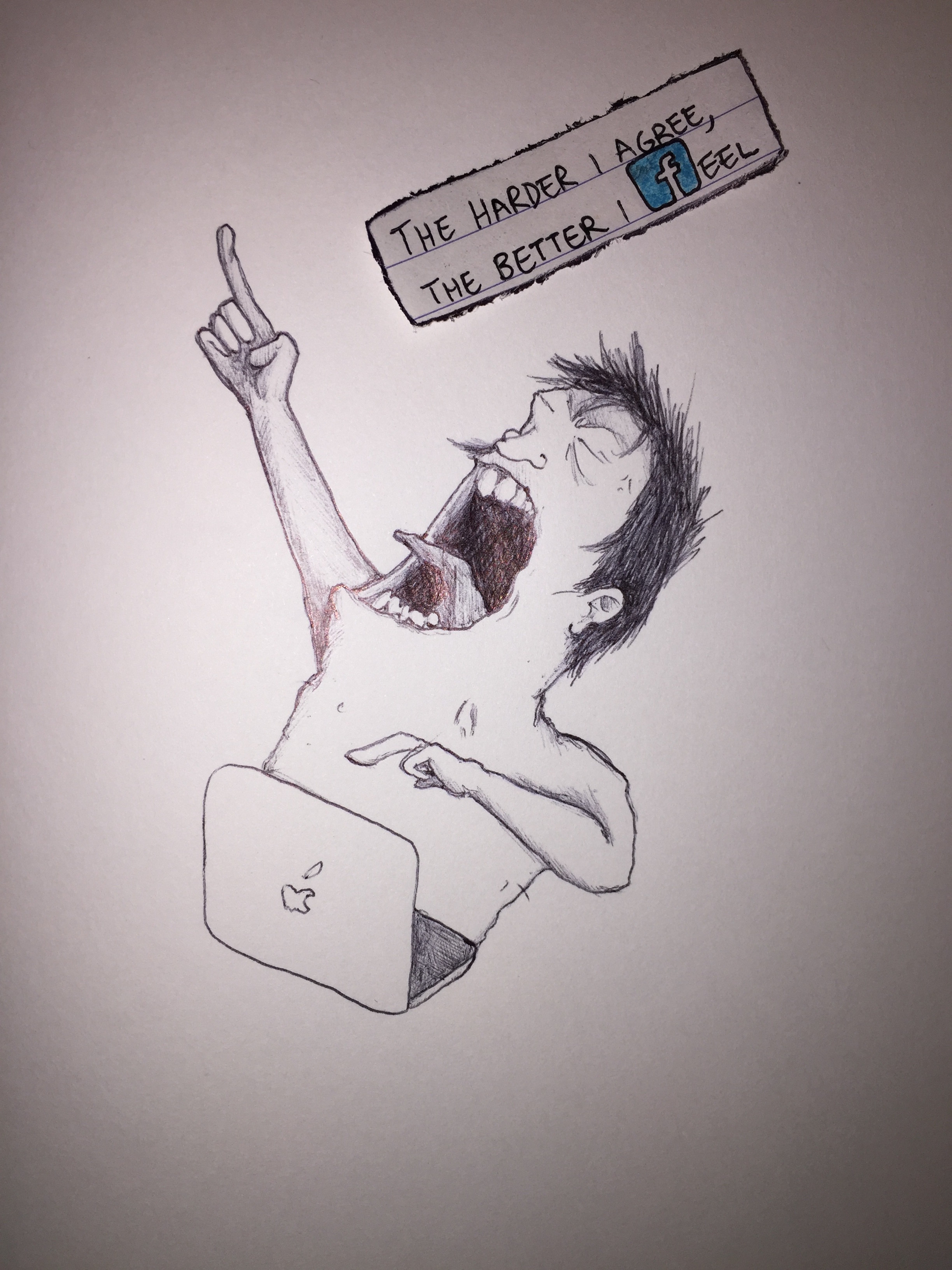 I have a distaste for PC culture in a lot of ways, but I'm not unsophisticated enough to be radicalized by it, like so many of the meat bags who have made Trump their strongman. However stifling the PC movement seems to me, the hardline reactions to it are more so. I thought my last HuffPost article about feminism as a platform would shake the hive of the same militant feminists who are still talking about the Ghostbusters Reboot War after nuking the scandalized nerds with highly enriched Girl Power. But, alas, as itchy as it makes me to blow their horn and use trending terms like "male fragility", I have to note that the only criticisms I received for that nuanced article (so far, anyway) have been two tweets from what appear to be fragile men.

So where do I stand exactly? Where do you stand? These are questions we're being engineered to ask at all times, and Donald Trump makes it easier on some of us. Bashing him is a responsibility for many a columnist and tastemaker, but for most of us, it is just an irresistible pastime or an easy, low-stakes way of taxonomizing our moral stances online in a very broad way. Having the "systemic" talk is harder than taking shots at the cartoon outlet that is Trump. And it's easy enough to think up theoretical people with theoretical reasons for avoiding that discussion in the current state of affairs.

One of these thought experiments is Tracy, who was in some Civil Rights group in college, but has since slowed her roll raging against the machine. She has two kids enrolled in an elite private school, and she has come to the subliminal conclusion that continuing to question an Establishment that is fostering sweet Nathan and sharp-as-a-tack Sarah's trajectory to two of the most comfortable existences civilization has to offer may lead to uncomfortable questions that Tracy, for one, doesn't have the time or energy to deal with right now. She gives money to Amnesty International, sure, but ultimately Tracy goes with the systemic flow and tries her best to distract herself from the ugly things she keeps hearing on the news. She might not admit it to herself, but she is afraid of considering that her children's inevitable success in life is being built on that rotten foundation that the younger, less embedded generation of activists is always working to expose.

I don't have children, but I imagine they can downgrade you to a more primitive operating system that makes taking and hoarding resources for you and your own second nature. For that reason, I'm not keen on calling Tracy worse or weaker than the average human. I don't think she is neglecting some intrinsic responsibility by wearing a conservative mask around the other private-school moms. I don't think humans are born humanitarian. I'm no sociologist, but I imagine the best of us, the most civilized, probably have to override some tribalistic wiring before contributing to civilization as a whole. Tracy, poor dear, simply isn't among the best of us. And neither am I, but I am in a good position, here atop Maslow's pyramid, to work toward that distinction. And I will work toward it, if I can do it my way, without being beholden to the sterilizing rules of engagement fetishized in PC culture.

So let me evolve less loudly than my contemporaries if it's passable. Let me have the strength to stand up for what's right in my offline day-to-day interactions. And let me tap into the Civic Mind without tapping out of my devotion to the dumb, irrelevant videos that I launch into the hollows of an internet at war with itself.