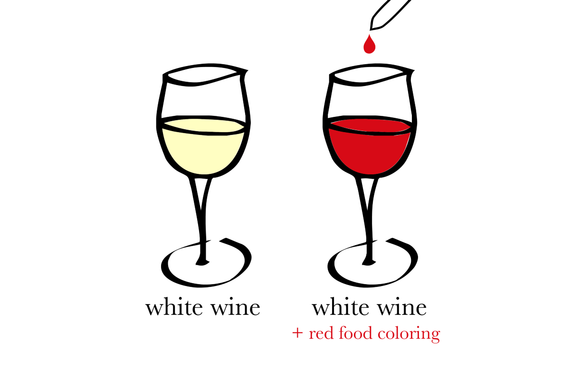 You're seated at an ivory table in an Ikea-furnished room. A mustached man in a tailcoat enters, and gently sets 2 unmarked bottles of wine down on the table along with a crystal tasting glass. He informs you in his thick German accent that one bottle is $5, and the other $50, and politely challenges you to taste them to identify the more expensive of the two.

What percentage of the time could you identify the more expensive wine? 70 percent? 100 percent?

In a study conducted by psychologists at Hertfordshire University, 578 people were asked to do the exact same exercise across a broad selection of both red and white wines. On average, each taster correctly identified the wine's price category just 47 percent of the time for reds, and 53 percent of the time for whites. In other words, the probability of distinguishing correctly was akin to a coin flip!

While most of us would like to think we can tell the difference, in reality, the average wine consumer struggles to differentiate wine based on price point.

Side note: Experienced wine drinkers have shown an ability to buck this trend, so don't lose hope in your wine drinking future. They simply know the characteristics to sniff out that are associated with pricier, high-end wines.

It's Thanksgiving dinner, and your eccentric uncle generously decides to crack open a bottle of his special red wine. "This is a $100 bottle I've been saving!" he boasts, as he carefully pours each person around the table a small glass. In eager anticipation, you raise the glass to your lips and proceed to give the wine a wee taste. It's utterly delicious, and makes that $10 bottle you brought taste like battery acid in comparison.

Now let me ask you this: If your uncle never told you the price, would you have had the same experience?

In a Caltech study, neuroscientist Hilke Plassman conducted a tasting where subjects were led to believe they were trying five different Cabernet Sauvignons at price points of $5, $10, $35, $45 and $90. The ruse was that they were actually only drinking three wines. The first $5 wine was given twice -- once with its real $5 price tag, and another time with a fictitious $45 price label. The second wine was marked with its actual $90 price, and then provided again with a fake $10 tag. The third wine was $35 and was marked as such.

Not only did the participants claim greater enjoyment when drinking the wines that were falsely identified as more expensive, but they showed increased activity in the medial orbitofrontal cortex -- the region of the brain associated with pleasure.

To be clear: They didn't just think their wine was more expensive and therefore subjectively like it more. They literally experienced something different.

And so, the plot thickens!

On one hand, the average consumer struggles to distinguish between the inexpensive wine vs. the expensive stuff, and on the other, the pricier we perceive a wine to be, the more likely we are to enjoy it that much more. Taking these phenomenons into account, here is my proposal.

If still in the early stages of your wine learning endeavors, don't spend more than an amount you're absolutely comfortable with on wine. For example, when I first started really getting into wine my price ceiling was $15. Figure out what that per bottle price level is, and set it as your max.

Also, we know that our perceptions literally change the way we taste wine, so setting the mood is crucial to priming ourselves for maximum enjoyment. To do just that, I suggest investing in the following items (note: I have no financial stake in these products). Consider these your "wine perception steroids."

This will run you just over $30 in total. 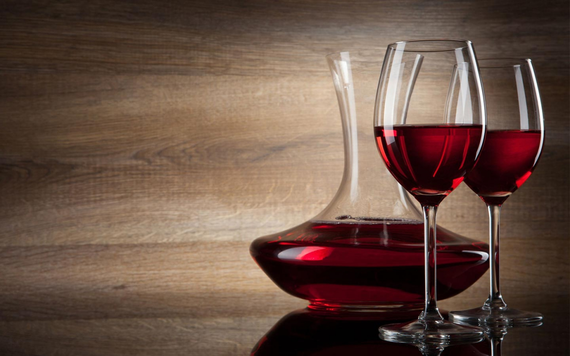 Once you've acquired your decanter and your two beautiful glasses, proceed as follows every single time you drink wine:

1) Pour the vino into a clean decanter

2) Toss the bottle in the recycling bin

3) Pour the wine into your beautiful new glass

4) Follow the "wine god" routine, and let your imagination take flight as you revel in the finest wine this world has ever seen 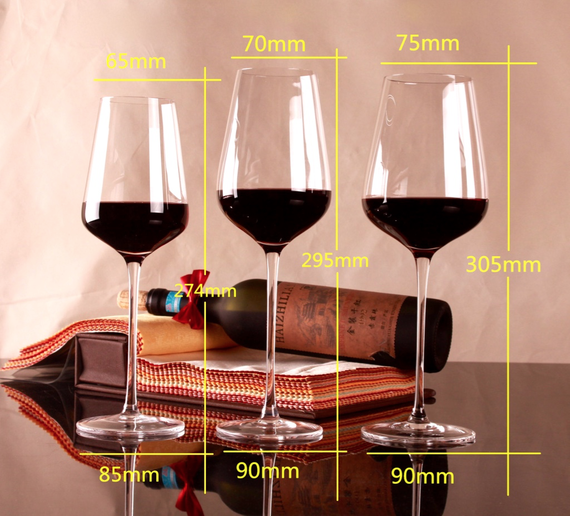 Scenario A: I've invited you over to my place for dinner, and alongside our first course I serve you a white wine in a miniature, 6 oz. glass.

Scenario B: I've invited you over to my place for dinner, and alongside our first course I serve you a white wine in a gargantuan, 40 oz. glass.

How do you think your actions and your experience would differ between the two scenarios?

It's a well documented phenomenon that larger wine glasses result in greater wine consumption. A recent study was carried out by the University of Cambridge which found that restaurant patrons consume more wine when served in larger glasses, and at a faster rate.

I find from personal experience that the opposite is true as well -- drinking from smaller wine glasses reduces the speed and quantity of wine consumption. My wine enrichment has grown substantially by merely being cognizant of wine glass size, how much I'm pouring, and the speed at which I imbibe. 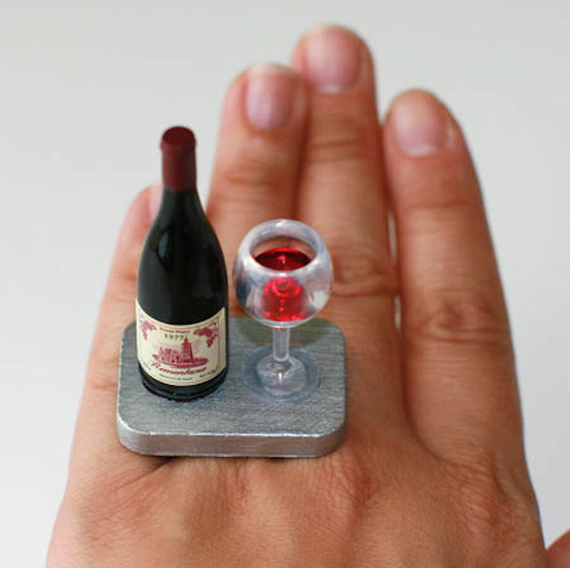 When you're at the movies indulging in the colossal sized tub of popcorn, you mindlessly devour it by the handful like it's oxygen. When on your last glass of a remarkable bottle of wine, it's liquid gold. You savor it to its very last drop.

Here is my personal recommendation:

If your mischievous pal served you orange juice disguised as grape juice, you'd wise up to his prank after taking your first sip, right? That's what I figured when I actually tried this on a good friend of mine several years ago. To both my shock and my utter delight, he was completely oblivious. It was only until he was a third of the way through the glass and when I fell over in my chair cackling that he knew something was off. 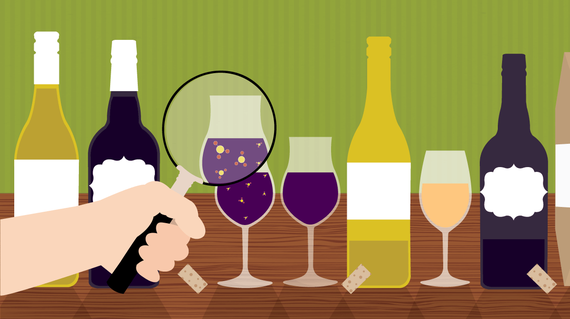 In a famous study done at the University of Bordeaux in 2001, 54 wine science students were provided two glasses of red wine, and then asked to describe what they smelled with as much detail possible. Unbeknownst to the students, one of the red wines was actually a white that had been disguised with food coloring.

How do you think they responded?

The following chart illustrates the actual results from the study. 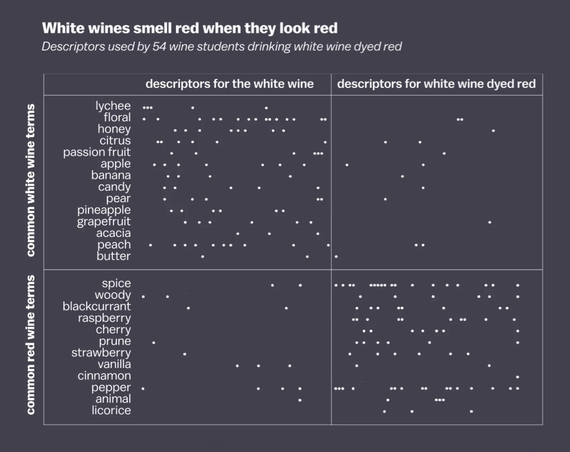 People massively discount the impact that sensory cues have on taste.

All of our sensory elements clearly play a powerful role in our experience of a wine. The more attention you pay to your wine, the more pleasure it will reward you in return. Every time you drink wine note the color, note the smell, and note everything you taste. Every observation will be a massive injection of meaning into your experience, no matter whether that meaning happens to be fake (as it was in the experiment) or not. 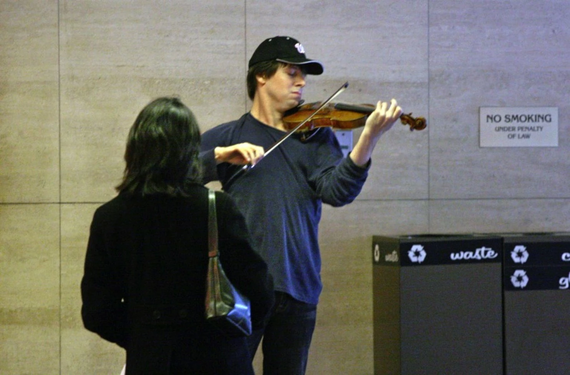 It's 8AM on Friday, January 12 in a Washington Metro station -- the height of morning rush hour. As thousands scurry through the hallways to start their days, a modest street performer in blue jeans, a wrinkled long-sleeved T-shirt, and a faded Washington Nationals baseball hat carefully scouts out his spot atop the escalators adjacent to the entrance of the station. With the case at his feet and a few bait dollars tossed in, he proceeds to serenade the frenzied passersby with his trusty violin. The occasional person tosses in their spare change, and at times a few crumbled dollar bills, but for the most part people storm onward with their heads glued to their feet and the sole mission to get wherever it is they are going.

The street performer may as well have been invisible.

Unbeknownst to those rushing by, the unassuming man on the violin was Joshua Bell, one of the most celebrated violinists of all time, playing some of the most beautiful, sophisticated, and challenging pieces ever composed. He was there as part of The Washington Post's social experiment on perception (see Joshua Bell pictured above in train station).

Here was one of the world's best violinists playing his heart out, and even as his enchanting melodies echoed through the hallways of Washington Metro, none but a mere few stopped to even take notice! They were in the midst of such rare greatness and beauty, yet completely oblivious. They were blinded by their bias towards street performers.

Our perceptions become our reality. From the price of our wine, to the glassware we use, to the mindsets we adopt, every single choice we make drastically affects our experience. So beyond my practical tips, never forget that what you perceive will undoubtedly alter each and every experience you have as you as you trek forth on your wine adventure.

What do you think? I'm going to continue to attempt the impossible of teaching you about wine without boring you to death. If you want to keep reading, follow me on Twitter, and check out my new publication, Vintopia. Cheers!

More:
lifestyleHealthscienceFoodTaste
Newsletter Sign Up
An essential daily guide to achieving the good life
Subscribe to our lifestyle email.
Successfully Subscribed!
Realness delivered to your inbox

Wine enthusiast and founder of Vintopia