What is a 'World Day' after all? Who cares? Probably the better question is "Who should care?"

August 10 is designated as World Lion Day, and as with other allocated "Days," the origin of such an event is to celebrate something globally, and think about how the day, and how the individual or entity being celebrated, influences our lives. I can see a World Dhali Lama Day, or World Peace Day because it has real meaning to the way we live our lives, and our meditations on this affects the way we change course. So at first I wondered if lions actually deserve a day and whether we should really be contemplating the impact that lions have on our lives. 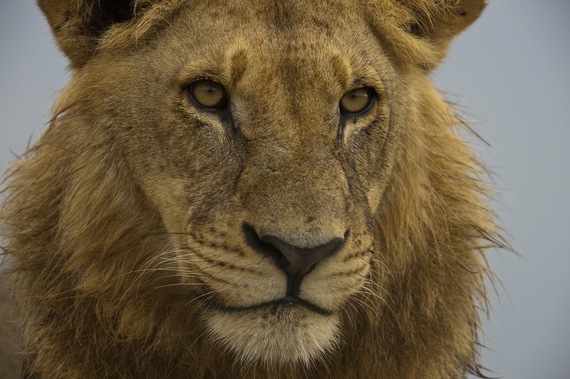 Take a walk in any city in the world and within a few blocks you will see a lion. London, New York, Washington, Shanghai, Helsinki, Nairobi ... flags, statues, icons ... lions are probably the most prolific creatures in the world if we include the symbols that represent them. So it's shocking that hundreds of millions of icons represent a population that is now only around 20,000 real, live, living, breathing, roaring, hunting lions. A hundred years ago we think there were over a million lions. When I was born, maybe 450,000 lions roamed these plains. Today we niggle over if there are 20,000 or 35,000 lions left and forget to look over our shoulders at history. There have never been as few lions on the planet since 3.5 million years ago, when we think that lions evolved from the early saber-toothed cats.

So perhaps celebrating them is wrong. We should actually be mourning the loss of lions. But celebrating, in many ways, is consistent with our long involved relationship with lions. As early hominids we watched them in fear from our dolomite cave entrances near a place called Swartkrans in South Africa, and looked on as dark storms flashed with streaks of lightening behind them as they devoured their kills. This is one of the highest lightening strike zones in the world, the result of which was the eventual dawning of the idea that we could walk down and 'capture' fire and take it back to our caves for warmth and 24 hour light and as a weapon against the marauding giant cats that made our lives a living hell. We also realized that we could scavenge from them, and dig out bone marrow left behind, and suddenly we were in charge of our destiny, not just passive witnesses to the hardships of what was dealt us. We evolved because of big cats, and lions were the biggest in the landscape we wanted to dominate. At some stage there was a tipping point where we developed weaponry: spear, arrows, guns, and within a short time, it was the lions that were dancing to our music, not the other way around. We were no longer shaking in our skins at every roar in the darkness. There has been a back and forth between us and lions ever since as if our destinies we are locked in combative dance, a tango, a flashing set of maneuvers to show our strength, our fitness, our metal capacity to out smart our dance partner: the fearsome lion. 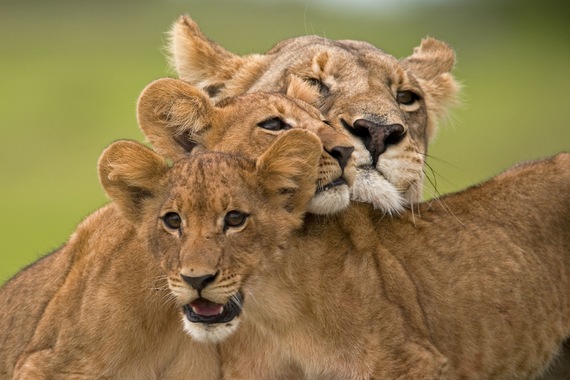 I stepped into a boardroom a few years ago and was confronted by a stuffed male lion, his face set in a snarling position, eyes forever locked in anger. Because I understood what this hapless creature was doing there, I sat in the largest chair at the end of the table with the lion behind me. When the CEO arrived, he was visibly unsettled by my selection of seating, and it confirmed my little experiment that the stuffed lion that the CEO had selected, hunted, shot, imported, filled with glue and now displayed, was about sending a single message: "If I can do this to our most fearsome and ancient competitor, imagine what I can do to you in this deal, this oil company merger, to you." While I think it's foolish, safari hunting of lions is all about display, and it's an understandable one if you place it in this context. No hunter wants to kill a lion and then leave it behind. It's about showing the trophy as a measure against oneself. The dance continues.

At some point though we understand that we cannot dance alone. Beverly and I started the Big Cats Initiative with National Geographic to be able to protect those very lions and we now have over 56 projects in more than 22 countries; we're determined that we never dance alone. 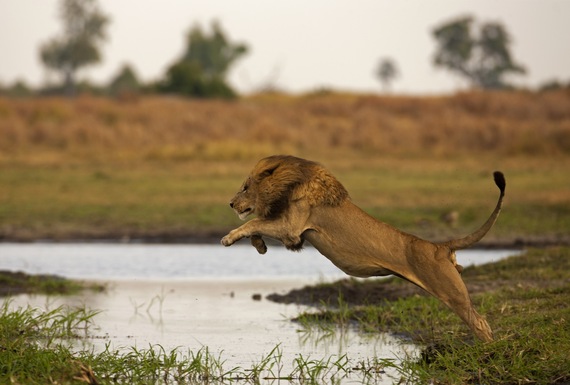 World Lion Day happens to be on the birthday of my late brother, a famous wildlife artist who crystalized the essence of what a lion is in brush strokes and in bronze, and as I sit in the shade writing this, trying to do the same, four lions are feeding on a buffalo nearby and I wonder at the fact that with our guns and anger, our insatiable desire to dominate everything around us, that we have allowed lions to still exist at all, these giant killers tearing away at flesh nearby. It stems I think, from our capacity to be good as well as bad, selfish as well as kind, creative as well as boorish.

World Lion Day is us at our best, celebrating the very thing that in the past has driven us insane with fear, killed our ancestors, our friends and our livestock. As we celebrate these manic killers in fact we celebrate more than lions and what they represent, we celebrate our capacity to be unselfish and broad minded, and most of all ... tolerant.

World Lion Day is when we celebrate that lions made us who we are.

Join a Twitter chat on August 6 at 12:00 p.m. EST with Big Cats Initiative Co-Founders and National Geographic Explorers-in-Residence Dereck and Beverly Joubert. Be sure to follow @dereckbeverly and @NatGeoLive and use #NatGeoLive to ask questions.

To learn about more ways you can help, please visit here.