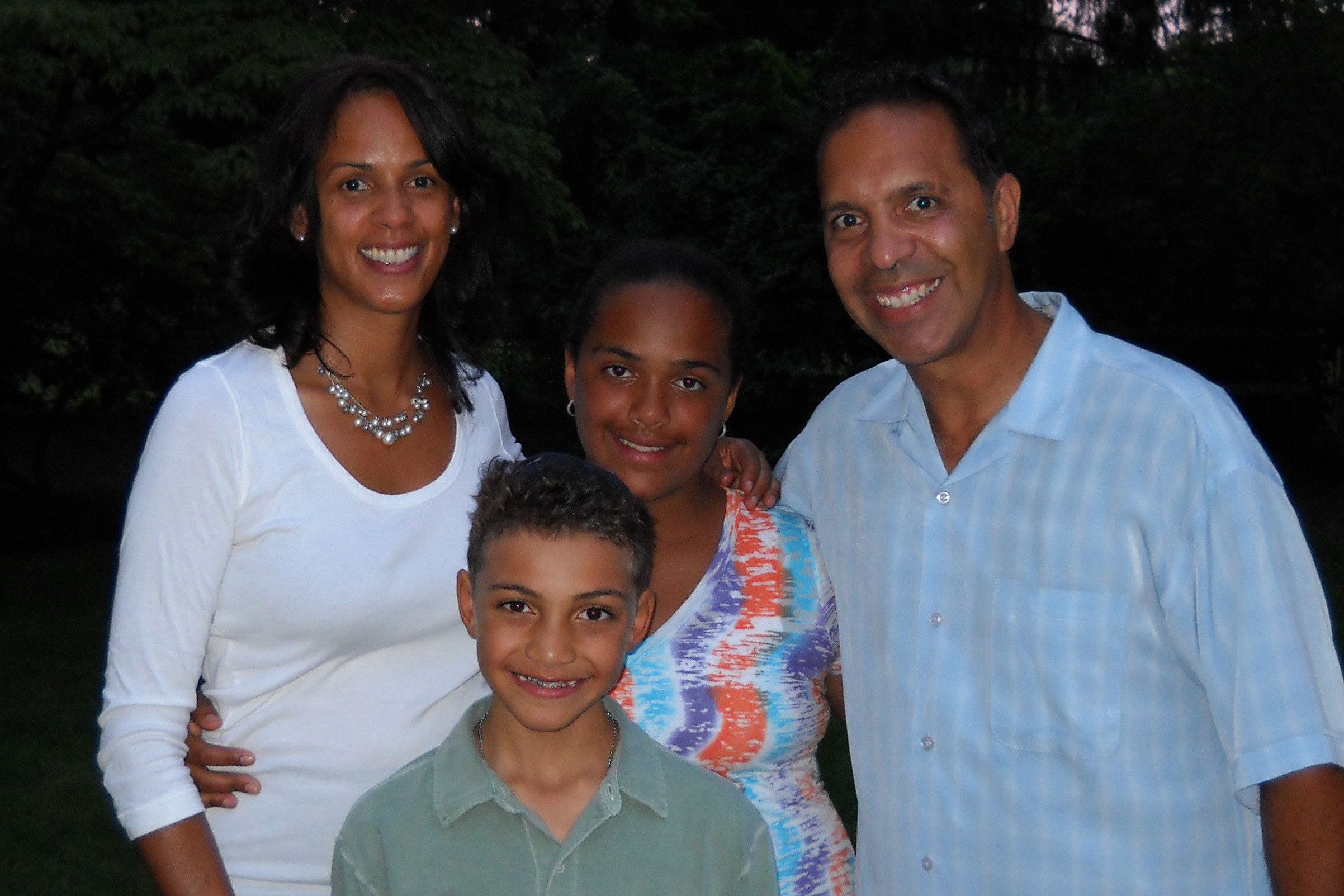 "It's an explosion of luuuv!" Elyse yells from the kitchen as she admires the golden challah loaves that she and her daughter Sydnee have prepared for the evening's Shabbat.

This night will be like no other night I've experienced with a Jewish family. While I have been a guest for many years at my friend Maggie Klein's family Passovers (I come armed with containers to take home matzo ball soup and charoset, and Maggie's sister, Fran Fink, is happy to fill them up), where I addressed the late matriarch as "Mother Klein," I have never been the guest of a Modern Orthodox African-American family. Tonight I will be one of two Gentiles, the other being Elyse's sister, Arnette Haynes, and we'll be joined by two other couples -- six children in all, and two dogs.

Elyse has just an hour to pull it all together. "What's not done at a certain time won't be done," she says. On the kitchen table, there are plates of colorful foods. Two of the four challah are made with chocolate chips, a request from her husband Mark, who's just come in from work, with nine-year-old Isaiah bounding in behind him. Mark grabs his yarmulke and says to his son, "Come on, we have to go, we have six minutes."

The Andersons converted to Judaism four years ago via an interesting and poignant journey.

Mark was adopted. He began his search for his biological parents five years ago and learned that his mother was Judy Rosen, a white Jewish woman living in Florida. "Had I waited 30 more days to look for her, none of this would've happened because Louise Wyse, the adoption agency, closed." Both of Mark's adoptive parents died.

When Mark first contacted his biological mother, she was very apprehensive. "I wasn't ready," she explained by phone from her home in Boca Raton. "But after a few weeks I called him. I saw him for four years before I said anything to anyone else." Rosen had become pregnant by a black man in the 1960s: "It was all very hush, hush, and already a difficult time," she said. Her mother had just been diagnosed with cancer, and Rosen had been in a terrible car accident. In fact, it was a doctor at the hospital who announced to her unknowing parents, "She didn't lose the baby."

When Mark learned that his mother was Jewish, he called a friend and said, "Guess what? I'm Jewish." Most friends weren't surprised, because they always knew he was mixed with something. Mark's journey began by going to synagogue with his friends. His mother didn't have a clue that he and Elyse were exploring converting to Judaism. Elyse, a marketing consultant and freelance writer, chose to study at the Jewish Community Center in Tenafly. "I realized through my studies that I shared the views of an Orthodox person," she said. "I think that way and knew that's who I am." Before converting there was a moment when she had second thoughts, after Israel bombed Lebanon in 2006. She remembered seeing pictures of a bombed-out Beirut. "I don't believe in bombing," she said. "It took a few days for me to rationalize this. I spoke to my rabbi. I had to battle myself. In the end, I realized I was free to be a Jew. My faith is not my race and it's not my politics."

I know the Andersons through a tight group of African Americans, of whom most, if not all, are Christians. I wondered how their conversion was accepted. Elyse said, "For the most part, our friends were very supportive and came for Shabbat and really enjoyed themselves, and then there were those who couldn't understand." One member of her family still isn't convinced. Her sister Arnette, a Born-Again Christian, comes to Shabbat often and goes to shul, too. Elyse laughs when she imitates her late father, who wholly accepted her becoming Jewish. He'd come to Shabbat, and when his phone rang he'd answer in a loud whisper, "I can't talk, I'm at Shabbat!"

Elyse is no-nonsense when it comes to her religion. "As with any convert," she said, "the three things I have agreed to do is to continue to study and teach the Torah to my children, observe the Sabbath and go to the Mikvah once a month." In the beginning, she admits, it was hard to turn down invitations during the Sabbath. "But now I like stepping off the merry-go-round."

Her husband isn't a rule-follower. He'll pose questions to his rabbi such as, "Who says I can't ride my bike or drive to synagogue?" He explains that he has a bad ankle and the walk to shul can be uncomfortable. The rabbi relinquished and told Mark that he can drive his car part of the way. He told Mark, "I'd rather have you here than not."

Mark, a car dealer, sometimes has to work during Shabbat. Elyse would like him to be more observant, but Mark has to work and make money. "He tries as hard as he can," Rosen said. "But she is incredible, very spiritual."

"The marriage is definitely stronger," Mark said. "We had a Hebrew wedding on the tenth anniversary of our original wedding. My wife guides me and has done a great job." Mark says he's never seen a more supportive community than this one. "When my mother came up to see us for the first time, another family insisted on making a dinner for 30 people. They didn't want Elyse to do a thing."

"It was beautiful," Rosen recalls. "I told my husband it was like a Havurah." (Havurah is Hebrew for a group, usually consisting of a group families who do things together.)

Rosen has another son by her first husband, named Howard Mark. Howard was to be named after her grandfather Harry, but there weren't many names that they liked that began with an "H," but they liked Howard. Mark, his middle name, was her ex-husbands grandfather's name. "You want to hear something?" she asks. "Mark's middle name is Howard." She adds, "As you get older, life becomes smaller and smaller and more interesting."

Before dinner, and before Mark and Isaiah return from shul, Elyse elegantly drapes a scarf over her hair and around her neck and lights the candles with another female guest. When the third woman arrives, Elyse tells her that there are still candles. Sydnee lights, too, as she's become a Bat Mitzvah.

Mark returns. First, he blesses each of the children, and then he offers a blessing to his wife and the other married women at the table. "I like to acknowledge them, too," he says.

For me, seeing this handsome man of color as he blesses the wine in Hebrew ("I'm studying, but not enough," he admits) makes me want to break rules and pull out a camera to film this other face of Judaism, the traditions and the look on Elyse's pretty face as Mark pays homage to her. As children and parents sing Shabbat songs, I think to myself that this may be more fun than the other Sabbath tradition: goyim having Happy Hour drinks to celebrate the beginning of our Sabbath.

Sydnee proudly shows me the pictures of her Bat Mitzvah. "These are friends in my grade at school," she says. "These are my friends from Jack and Jill. That's one of the rabbis who stopped by. There were 200 people."

When she was first told that the family was no longer celebrating Christmas, Sydnee was sad. But her eyes light up as she points out that Chanukah is eight days long. "Multiple gifts and lots of candy," she says.

How sweet it is. Shabbat Shalom!