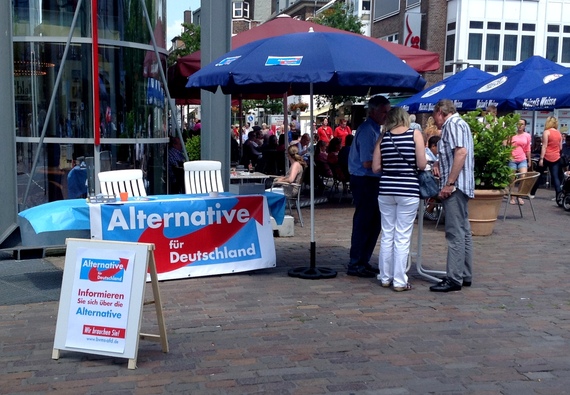 As the results of the elections in the three German Länder (states) are coming in, it is clear that what had been broadly expected has indeed happened. The far right Alternative for Germany (AfD) is the big winner of the elections. But that is also the only really clear lesson so far. Why the AfD has won and, more directly related, at whose expense, will remain unclear until more detailed individual-level voter studies become available.

In the first reports the emphasis is on the gains of the AfD and the losses of the Christian Democratic Union (CDU) of Chancellor Angela Merkel, seeing the rise of the anti-immigrant AfD as the backlash to her Willkommenkultur (welcome culture) toward the Syrian refugees. Yet, while it is true that the CDU lost in two of the three states, they only lost big in one. In fact, the three state elections seem to be at least as much guided by state politics as by federal politics.

As a quick background to this new upstart in German politics, the AfD was founded by a group of mostly conservative economists in 2013. It was a soft Eurosceptic party, supporting European integration but opposing the Eurozone. The first election results were encouraging, including 4.7% in the 2013 federal elections (just under the 5% threshold) and 7.1% in the 2014 European elections. But like all parties to the right of the CDU before them, the AfD was soon 'infiltrated' by far right activists, including supporters of the Islamophobic street movement Patriotic Europeans Against the Islamisation of the West (Pegida). Internal pressures came to a blow at the party meeting in 2015, where conservative party leader Bernd Lücke was replaced by the far right Frauke Petry, who made the AfD practically into the party political representative of the broader Pegida movement (without having a formal partnership).

In this first significant test for the new far right course the AfD achieved its biggest result in Saxony-Anhalt, the only state in the former East to contest elections this weekend. According to ARD predictions the far right party will win 24 percent! Interestingly, the CDU, which governs the state in a Grand Coalition with the center-left Social Democratic Party of Germany (SPD), loses only modestly in Saxony-Anhalt (-2.8%). The big losers are the SPD (-11.3%) and the far left Die Linke (The Left), which loses a staggering 8.0% in opposition. The extreme right National Democratic Party of Germany (NPD) also seems to have lost much of its 4.6% of 2011.

In the two western states the successes of the AfD are fairly similar, but the losers are strikingly different. The rich southern state of Baden-Württemberg presents the classic pattern: the far right AfD wins big (14.9%) at the expense of the center-right CDU (-12%) and the center-left SPD (-10.4%). However, Baden-Württemberg didn't have a Grand Coalition of CDU and SPD but a red-green coalition of SPD-Greens. And the Greens were the second biggest winners this weekend, becoming the biggest party with 30.5% (+6.3%).

In short, the three state elections were, first and foremost, state elections. While the across-the-board gains for the AfD are clearly a federal signal, it goes much too far to see these three elections as an anti-Merkel or anti-Willkommenskultur result. Moreover, these three elections don't make the AfD the fourth party in Germany. First of all, the AfD will undoubtedly have a hard time keeping its parliamentary factions together, as most far right parties in Germany. Second, the AfD is more generally heading for even stronger internal discord, as the new leadership of Frauke Petry has to walk a fine line between increased state pressure - emphasized by a new procedure to ban the NPD - on the one hand and increased pressure from extreme right forces on the other. Third, this is the height of the refugee crisis, with almost everyone in Germany (and Europe) criticizing Merkel. Next federal elections are still over a year away and it id doubtful, though not impossible, that the refugee crisis will continue to have such high salience in late 2017.