Do a quick Google search and you'll find a dozen theories on how a reality television star, Donald Trump, became the presumptive Republican nomiee for president. Nate Cohn believes it could have something to do with Trump's large, fractured group of opponents. Nate Silver faults the media and a weak Republican establishment. Jonathan Chait, thinks voters are just plain stupid.

Of course, this election was endlessly wild, but to me, there was one defining characteristic: The appetite so many GOP voters had for a populist economic message so fundamentally divorced from anything we have heard in recent political history.

This observation fits neatly with a theory set forth by two political scientics, Gary Miller and Norman Schofield, in a 2003 paper published in American Political Science Review. In short, they argue that our two dominant parties are constantly realigning, with the dominant issues oscilating between social and economic. Using their model, the 2016 election begins to make far more sense: 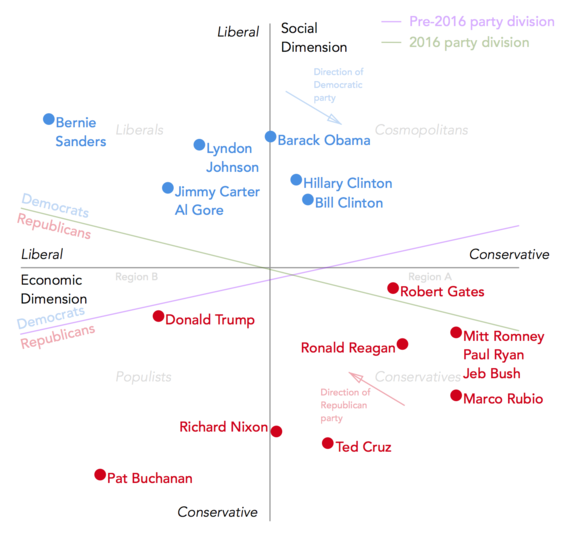 (Don't bother staring at this for too long. Familiarize yourself with the labels and axes, then read on and refer back. It will begin to click.)

Ever since Richard Nixon's Southern Strategy brought many disgruntled former Democrats (the Populists) into the Republican party, the parties have more or less been held together on social issues. Working-class social conservatives, many of whom would benefit from the economic liberalism of the Democratic party, have nonetheless stuck with the Republican party. On the other hand, many highly educated, upper-middle class voters--the so-called "socially liberal, fiscal conservatives"--have gone for Democrats (the Cosmopolitans).

But then came the Great Recession. As income inequality soared to historic heights, wages failed to rise for ordinary Americans, and Wall Street--the initiator of the crisis--continued to amass extraordinary wealth, the Republican party ignored the economic concerns of many of its voters. While still adhering to its socially conservative message, the Republican party of the last few years opposed a higher minimum wage, fought for a repeal of Obamacare, and advocated major slashes to Social Security--in other words, policies that did nothing for stuggling working class Americans.

Then came Donald Trump. He strongly condemned trade deals that have sent American manufacturing jobs overseas. He self-funded his campaign to shield him from being influenced by the wealthy corporate elite. He said he will put up a wall and always put "America first."

In other words, he began realigning the parties. He spoke to a disaffected group of voters and brought them into his coalition, just as Nixon did, but with economic issues (globalization, economic security) instead of social issues (civil rights) as the dominant driver. On our graph, he moved the Republican party away from the "Conservative" wing and more into the "Populist" wing. (Here is my argument that this new realignment could bode well for Trump in the general election.)

Here's the evidence: The Republican party is beginning to fracture. The former Republican establishment (the Conservatives) is hanging on by a thread. Paul Ryan, the highest ranking elected Republican in the country, plainly said he is "not there yet" on his support for Trump, while former presidential nominees Mitt Romney, George Bush and others have said they will not attend the convention. On the other hand, some more liberal members of the former Republican establishment, such as Robert Gates, have voiced support for the Democratic candidate, and the Hillary Clinton campaign believes many of those voters (Region A) might be in play in the election.

Further, Trump has performed well in states with "open primaries," where voters can vote for any candidate regardless of party affiliation, which could suggest some former Democrats are leaking into the Republican party (Region B).

The strongest evidence, however, is the fact that social issues have been virtually meaningless in this election. Trump has stumbled over his support for abortion rights, split from the Republican party by opposing North Carolina's infamous bathroom law, and been more or less silent on issues formerly believed to be crucial to any Republican's success. But none of it has mattered.

Indeed, the most defining element of this election has been a Republican candidate running to the left of the Democratic candidate on economic issues. The general election will surely be defined by free trade and globalization, with Trump consistently hitting Clinton for her past support of NAFTA and the Trans-Pacific Partnership, with social issues fading into the backdrop.

What many of the Trump-expainers have missed is that this election is about far more than Donald Trump. His race-baiting, violence-preaching, and severe lack of political correctness are surely interesting and chacterstic of other sentiments brewing across the country, but there is something much bigger going on. Within the context of the rise of the populist Tea Party and the outser of former House Speaker John Bohner and Majority Leader Eric Cantor, it makes sense that Trump--a populist running against the elite GOP establishment--could be the choice of Republican voters. All he did was accelerate a trend we have already observered and place upon it some ugly features. Once the dust of his nomination clears, all that he appealed to will still endure.

Racism. Stupidity. A weak news media. These are all just small paragraphs within a much larger chapter being written right now into American history.