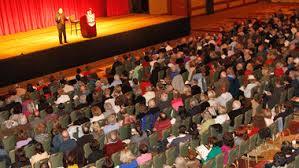 Imagine a university in which classes are taught by some of the most popular and accomplished instructors from some of the most prestigious universities around the country. Imagine that, in one day, one can take advantage of subject matter covering art, law, behavioral science, and politics. Now imagine that there are no exams, no homework, no note taking and no need to hold a bucket under the head of your vomiting roommate. For Life in the Boomer Lane, this was the stuff of fantasy.

It began some months ago, when LBL was contacted by Steven Schragis, the brilliant man who started One Day University. According to the New York Times, "Schragis got the idea for One Day U when he was visiting his daughter, a freshman at Bard College. "There were about 600 to 700 parents there," Mr. Schragis said, "and they were all thinking the same thing: 'I wish I were going to college instead of paying for college.'"

Schragis asked LBL to write about One Day U on her Life in the Boomer Lane blog. Being the worldly, sophisticated person she is, she responded, "I've never heard of One Day U." This turned out not to be a problem, as the offer was then made to have LBL and a guest of her choice attended the Washington DC One Day U and write about it. Yesterday was the day. Now with Husband in tow ("I'm missing the Redskins game. I hope you appreciate that."), LBL went to the Hyatt Regency Hotel in Washington, DC and followed the mostly grey heads headed toward a huge ballroom.

One Day University is held annually, in over 20 cities around the country. Each location is sponsored by a newspaper. DC was sponsored by the Washington Post. Each 'Day' consists of four lectures, taught by four instructors. One instructor is always chosen from a local university. At the end of each 60-minute class, there are 10 minutes allotted for questions. LBL's day consisted of:

The Genius of Michaelangelo, taught by Tina Rivers Ryan, art historian and one of the top-ranked instructors at Columbia. LBL and Now Husband were both riveted. Ryan made Michaelangelo the artist and Michaelangelo the man both come alive, in ways that went well beyond merely discussing his greatest works of art. Michaelango was, indeed, a genius. He might have been the greatest artistic genius who ever lived. He was also qvetchy, arrogant (a fellow student punched him in the face one day, breaking his nose), a self-promoter, and had a dubious record regarding self-cleanliness (He wore boots made of dog skin, which he almost never removed. When he did, finally, remove them, a lot of his skin came off with the boots). The day was off to an outstanding start.

4 Trials That Changed the World, taught by Austin Sarat, professor of Jurisprudence and Political Science at Amherst. Dr Sarat analyzed the Scopes Monkey trial, the Nuremburg trials, OJ Simpson's trial and Bill Clinton's impeachment trial. Sarat's sense of humor was as expansive as his knowledge of the law. Once again, LBL and NH were riveted, so much so, that they continued to talk about the class through lunch.

Men, Women, and Politics, taught by Jennifer Lawless, nationally recognized expert on women in politics. Lawless' class went beyond politics, to the heart of why women choose not to run for political office. The answers were quite surprising (It has nothing to do with family obligations or prejudice on the part of males), and LBL suspects they are the same reasons that stop women from climbing to top executive positions in large companies. The questions people asked afterward showed that this is a topic that needs more discussion. Much, much more.

What is Emotional Intelligence?, taught by Marc Brackett, director of the Yale Center for Emotional Intelligence. Brackett explained how our emotions determine our actions and how the lack of understanding of that, as well as our not teaching young people to effectively manage their emotions, has been taking a terrible toll on the youngest generation (Across all geographic areas and all income levels, 75 percent of students say their lives are unhappy).

At day's end, LBL's head was spinning (a common occurrence, but in this case, it was for a good reason). Even NH was delighted with the day, at least until he found out that this particular Redskins game that he didn't get to see, would go down in history as one of their great wins.

Register now. Since we all love to save money, this month One Day U is offering an $80 discount on their $179 fee, with code BOOMER. Going back to school for $99 has to beat spending one's money almost any other way. You can register at at www.onedayu.com or 800 300 3438. LBL will be in attendance at the 4/10 DC event. Now Husband will be there also, as long as the Redskins game doesn't conflict. Or maybe he'll be there again, anyway.

PHOTO GALLERY
What Is The Most Random Fact That You Have Never Forgotten?
Download
Calling all HuffPost superfans!
Sign up for membership to become a founding member and help shape HuffPost's next chapter
Join HuffPost

Going Back To College For Just One Day
What Is The Most Random Fact That You Have Never Forgotten?