Do you ever have one single day that feels like it has been many, many days long? Today -- and, as I think about it, nearly every Thursday -- feels like it was five days long.

I'm throwing it back this Thursday to this same Thursday's morning, which feels like four days ago, when the fire alarm went off at Lifetime while I was shaving my armpits so that I could take my children swimming. Because catching kids as they come down a water slide with hairy armpits isn't my thing when I can help it.

I had gotten them all ready in their swimsuits so that I could get myself ready. It seems that most of us do this: we get them all set first so that we can fly around like bats out of hell to get ourselves somewhat presentable.

They were ready and waiting, sitting on a bench in the family shower stall while I did a quick shower shave when the fire alarm went off. I was pretty whatever about it because I didn't really believe the fire alarm blinking and sounding was indicative of an actual fire. It had to be a false alarm. A test, if you will, to see how fast those gym goers could hop off their treadmills and run outside.

Only it wasn't a test. An employee banged on my door yelling "Hurry up! Get out!" When I opened the door, I smelled smoke. I grabbed my towel and the baby, and told my 4-year-old to hang on to me. In the chaos, my 6-year-old got swept up into a camp group by another employee who thought my kid was part of the camp. I ran out in my towel frantically trying to find him.

Everyone hurried out of the building, except, as luck would have it, I was the ONLY one who had been showering and who was closest to the small electrical fire's origination, and so I was the ONLY one, in a crowd of maybe 100, who was naked except for a towel in the parking lot as the firefighters pulled up. 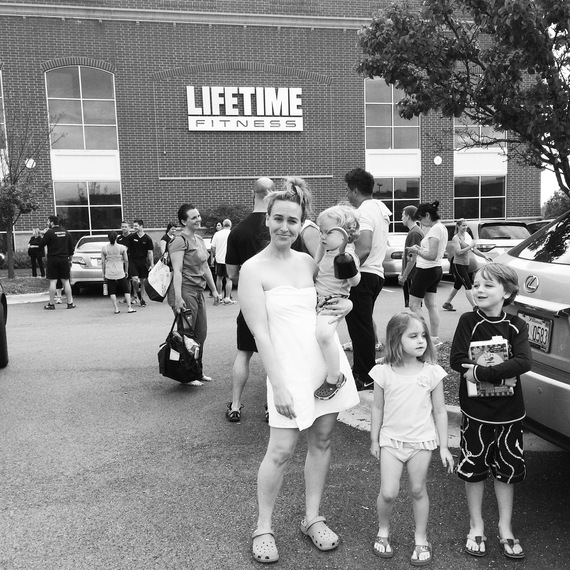 It was an ironic twist on the old Walk of Shame. I walked, three kids deep, with only a towel into a parking lot of people who had been working out. One woman kindly offered me her sweaty shirt, which was all she had to offer, once I hit the outer ring of people in the parking lot; I declined. After you've had a baby or two, and for sure after you've walked a parking lot of people in nothing but a towel and freaking Crocs, any sense of modesty is long gone.

But, I did ask the woman to take this picture and to send it to my phone. Because there is no way I'd remember that things like this happened on the regular in these years without some proof. When days feel like weeks, you can't remember things, like how your baby managed to grab his Captain Hook hand but you couldn't manage to grab yourself a shirt.

I look back now to this morning and think, "Why on earth didn't I at least grab my shirt?" Now that my children are all safe in their beds, nothing seems too hard, too problematic, too much like a fire drill, or, worse, an actual fire, to forget to grab clothes. We forget that these are the days when we are making sure to grab our children, we forget the fear we feel when things go haywire right before our eyes, when we thought we had it under control; we forget why we forgot to grab our shirts just the same as we forget why a new mother can't get into the swing of things, why any person whose shoes we are not in cannot seem to figure out all of the things that we can so clearly see as we sit on the sidelines of their lives, even though we are deeply involved, sometimes running, from the fires in our own. Practically naked.

We keep making sure our children are clothed and fed; we make sure that they have their special Captain Hook hands all while we have zero clothes on underneath gym towels in parking lots full of strangers.

You know, though, today, in this ridiculous situation, I walked out to every single woman looking at me with the kindest eyes; it almost made me cry. Even if they hadn't been here, actually -- naked but for a towel in front of a bunch of strangers -- so many of them had been here. They, all of a sudden by seeing me, remembered being here when their kids were young, when they, too, thought that sneaking in a quick shave would be quick and, dare I say, easy. They saw me today and we laughed together. They held the baby as I adjusted my towel, ran to find my other child, and comforted the one who was scared. And, I think, they did not forget anymore when one day felt like many, many days.