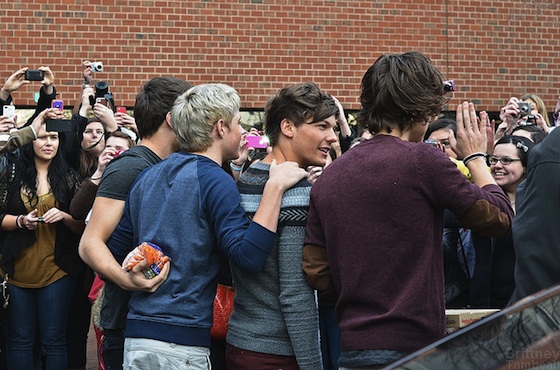 Last week at the MTV Video Music Awards, after One Direction won their third Moonman, Harry Styles and Louis Tomlinson gave each other a big, warm, bromantic hug. But should it have been a big, warm, romantic kiss? A contingent of 1D fans thinks so.

Two weeks ago I wrote a Huffington Post blog titled "What If One of the One Direction Boys Were Gay?" and in it I wondered what would happen if one of them decided to tell the world he was gay. "Would his umpteen million devoted female fans take the news OK?" I asked. I mentioned rumors about Harry and Louis, but in my mind the article was not about whether either is gay but about whether pop music fans are ready for an out-of-the-closet gay boy-band relationship.

The answer was a resounding "yes!" Hours after the article was published, my iPhone started buzzing constantly with notifications that I had gained new Twitter followers with names like "LarryStylinson4Eva" and "Larryisreal."

For the uninitiated, "Larry Stylinson" is a nickname combining the names of Harry Styles and Louis Tomlinson, along the lines of tabloid nicknames like "Bennifer" and "Brangelina." However, whereas Ben/Jen and Brad/Angelina are documented real-life couples, the existence of "Larry Stylinson" as a romance is up for debate. Neither Harry, Louis, nor their management has stated publicly that there is a romantic relationship between the two, although Harry has addressed the rumors. Yet Larry fans want the two to be together so much that #LarryStylinson has become a worldwide social-media phenomenon, held together with a near-religious belief system.

I started receiving tweets that said things like, "You're the first adult who has written about Larry with any sort of respect"; "A Prophet has spoken"; and, "Ben Harvey you're my God." (Can you believe you're reading a HuffPost piece written by a veritable deity?) Soon dozens of Larry fans had sent me links to the Larry "Bible," a 15-minute YouTube video featuring clips of Harry and Louis being playful in interviews, embracing backstage, and looking at each other in the way you look at someone with whom you share a wonderful, butterflies-in-the-stomach secret:

After watching the "Bible," I tweeted, "OK, I'm on board with you #Larry fans. Whatever is going on between them, it's beautiful." I wrote that tweet without realizing the sheer size of the fandom. What came next was my own microscopic version of what happens when you experience viral fame, a small measure of what the the boys of One Direction experience everyday.

First came the news that I had been anointed "co-captain" of the S.S. Stylinson. (In fandoms of this sort, those who are on board with a certain romantic pairing are said to "ship" that couple, hence the fandom existing on a virtual boat.) Then came the post "Why Ben Harvey is God" and fan art depicting me as a god in a rainbow scarf perched above the S.S. Larry Stylinson, aka "The Ship of Dreams": 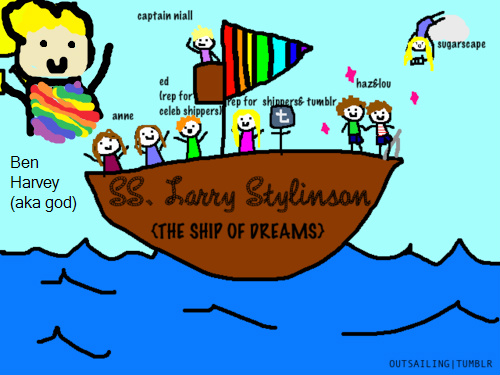 Then someone created a Tumblr blog dedicated to me, saying things like, "He's the only one who works in this business who understands us Larry Believers." There was even a young, gay Larry fan who was so excited that I'd clicked "like" on his Tumblr post that he created a video about it. All of this less than 48 hours after my article was published.

Before I could get comfortable donning my nautical captain's outfit, the tide shifted, and some of the Larry fandom turned on me. I got haters! There was an "I'm tired of the Ben Harvey thing" post and then conspiracy tweets that I was going to be paid off by One Direction's management to make my Huffington Post piece go away. I received emails from older female Larry shippers who warned me not to link to certain sensitive Tumblr blogs, because many of these teenage girls viewed Tumblr as their private fan community. And quite a few Larry devotees became wary of me disrespecting the "fourth wall," the idea that shipping fans shouldn't talk to the media or the outside world about the insular fandom (something I hope my Larry family can forgive me for after reading this piece). In "An Open Letter to Ben Harvey," someone warned me, "As much as I (and all of the Larry shippers) wish Harry and Louis could come out and be happy in public and generally be themselves in front of the world, they simply can't, not right now."

As you can see, not everything is rainbows and smiles within the Larry shipping underworld; in fact, feelings -- or "feels" as they call them, a play on a Mean Girls quotation -- run strong. Many believe that there is an orchestrated conspiracy to keep Harry and Louis in the closet, and that Eleanor, Louis' professed real-life girlfriend, is his "beard," provided by the record label to make him appear straight. Tensions are high between those who ship Louis/Eleanor and those who ship Larry, and the Larry fandom often feels ridiculed by other One Direction fans and bloggers. Larry fans point to one article in particular that paints them as delusional and accuses them of disregarding real-life situations -- like girlfriends -- as merely obstacles to their belief.

I don't find Team Larry to be delusional -- far from it. In fact, I believe that whether they're delusional or not is less important than what this movement offers: some of the most encouraging signs we've seen for the future of LGBT equality and acceptance.

As a shy kid in the early 1990s, terrified of the gay man I was becoming, I spent an entire summer on MicroMUSE, a virtual environment that allowed users to interact in Cyberion City, a space station orbiting the Earth of the 24th century. It was a text-based parallel universe, a precursor to augmented-reality gaming worlds like Sim City or Second Life. I learned how to code and build virtual objects. I made online friends, became a "wizard," and engaged in behind-the-scenes game politics. Oddly enough, it was the only place I felt like I could be myself. Essentially, through MicroMUSE I learned how to interact with people in an online world before I felt comfortable doing so in the real world. But what was missing for me was a connection to the gay universe and signs that there were people out there who felt the same way I did.

Today kids no longer need to hide away in virtual worlds in order to discover their sense of self. They have a social-media dashboard at their fingertips, filled with gay-affirming messages about real-life pop-culture phenomena like One Direction. The Larry fandom is a community born online that wants happiness not just for Harry and Louis but for gay society as a whole. What's more, the Larry community pushes forth a pro-gay agenda among a soon-to-be voting demographic. Before we know it, the waves guiding the S.S. Stylinson will reach our shores, and we'll all be climbing aboard.