Editor's Note: To protect the privacy of the minor about whom this story was written, the HuffPost Teen editors have chosen to remove certain identifying information. “No one retweets me anymore and it makes me sad,” tweeted a teenager named Taylor on November 8.

But last night, when Taylor tweeted that she had attempted suicide by intentional overdose, there was no shortage of retweets from her fellow One Direction fans, who sprang into action to make #prayforTaylor a worldwide trend. Fans of the massively popular boy band also alerted Taylor’s family, who rushed her to the hospital and possibly saved her life.

In the process, however, they revealed how disturbing and wildly out-of-control the “bravery” trend of suicidal ideation within the 1D fandom actually is.

Taylor has a rare condition known as misophonia, a neurological “glitch” where certain everyday sounds can trigger rage responses, suicidal impulses, and other intense reactions. Though Taylor can do little socializing for risk of exposure to unwanted sound, she finds comfort in music -- especially that of her favorite band, One Direction.

On Sunday, Taylor tweeted, after learning she would not be attending the band’s Madison Square Garden concert, that she was “D O N E.” Although later she seemed fine, tweeting about other upcoming concerts and encouraging friends not to self-harm, she also tweeted that she was “genuinely scared of my future like will i be dead will i be in jail will i be happy or sad”.

Shortly before midnight Eastern time, Taylor’s tweets took a turn for the grim, and finally she tweeted that she had overdosed: 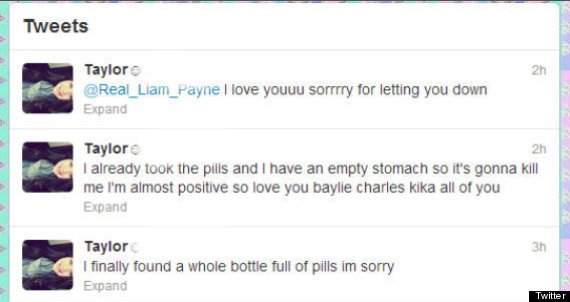 Her friends on Twitter immediately urged her to call 911, and when that got no response, they began to RT for help, sending the hashtag #prayforTaylor spiraling upwards to trend at #3 worldwide. Almost immediately, friends who knew her real life contact information stepped in, tweeting her real name and location, and even her phone number, in order to reach police in Taylor’s vicinity. 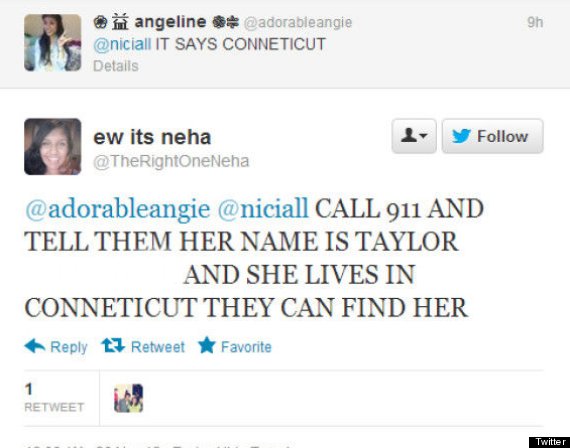 Twitter user @unionziam took the step of messaging Taylor’s sister, Alex, and one of Taylor's cousins on Facebook. Alex replied in an exchange that Taylor had awakened her parents and that they were probably “headed to the hospital.” When the Daily Dot attempted to contact Taylor by phone, her mailbox was full.

Meanwhile, on Twitter, something extraordinary and yet entirely unsurprising occurred: a series of similar tweets from similarly allegedly suicidal fans: 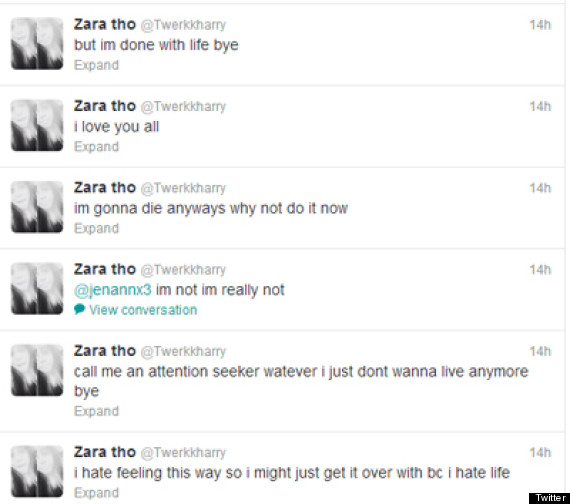 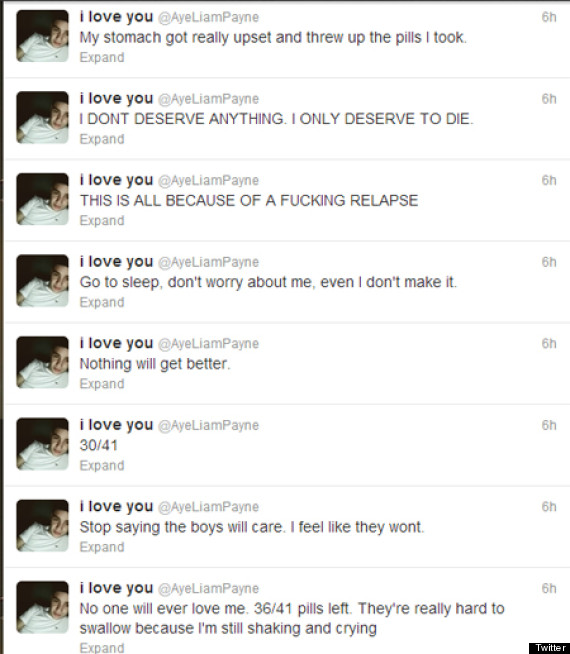 The “#prayfortaylor” hashtag exploded in a veritable sea of allegedly suicidal Twitter users... 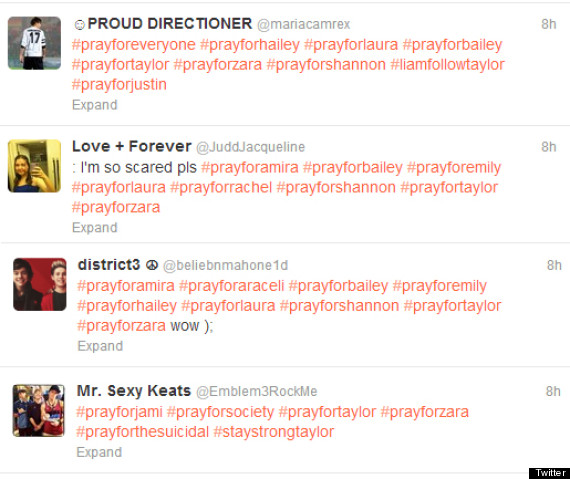 …prompting at least one Twitter user, ‏@Nialls_Nipple, to lash out at the string of Twitter trends: “NO, STOP IT. NO MORE PRAY FOR SUICIDE BULLSHIT. #PrayForTaylor that's it. She actually attempted to commit, no one else, SO STOP LYING.”

Her frustration is valid. The One Direction fandom has for a long time been both plagued by online harassment and obsessed with its own predilection for self-harm. It’s not uncommon to see Directioners writing (and sometimes carving) the word “bravery” onto their arms and wrists in solidarity for what many feel is the act of courage it takes to stay alive.

In September, when One Direction member Louis Tomlinson declared that the rumors of his relationship with bandmate Harry Styles -- a relationship that has become an obsession for many fans -- was “bullshit,” fans fabricated the idea that nine of their own had taken their own lives. They turned “#RIP9LarryShippers” into a trending topic without any attempt to verify whether anyone had, in fact, died.

It’s been a recurring pattern in the fandom since at least July, when one fan deleted her Tumblr amid threats of suicide, prompting the fandom to fall into mourning for her demise.

Taylor blamed her suicidal tendencies on a “relapse” rather than any One Direction-related harassment or distress. Three hours after her ordeal began, she finally updated Twitter again, tweeting a photo of her hospital room to defend herself against allegations of having faked the whole ordeal.

An exultant fandom rejoiced at its life-saving abilities, while other fans remarked that the outpouring of concern shown for Taylor, Zara, Laura and other fans had given them hope: 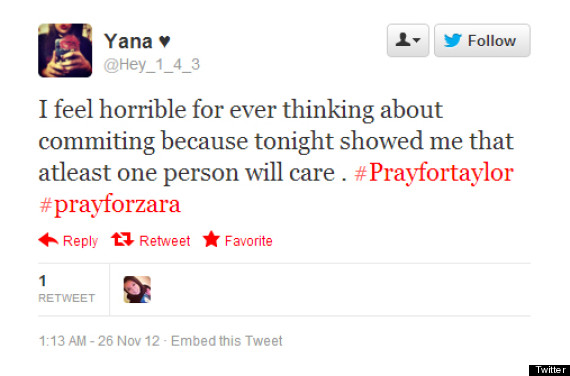 It bears noting that the major difference between Taylor’s alleged suicide attempt and those of other Directioners in the past is that this time, fans were able to draw on real-life details that Taylor had shared and quickly leap in to contact her family. While other alleged suicide attempts within the fandom have been unverified, there aren’t always ways for online communities to verify the real-life identities of those in their midst, which can mean that some people really do disappear without a trace.

Yet while Taylor’s story had a happy outcome, the reaction from the Twitter community borders on glamorization of suicide as a means of garnering attention that some fans feel they can’t get any other way. As a byproduct of the outpouring of concern over her well-being, Taylor gained 7,000 new Twitter followers.

Though last night the One Direction fandom was able to intervene to help Taylor and possibly others as well, it seems troubling that the fandom is simultaneously elevating the suicidal in the name of helping them.

More stories from The Daily Dot: