It's no surprise to #Directioners that beneath One Direction's squeaky-clean boy band image and radio-friendly appeal, a few of the boys are sporting some well-hidden and edgy body art. Recently, Harry Styles debuted a new tattoo -- he was spotted out and about with what appears to be an small outline of a clothing hanger on his upper left arm.

And Harry's not the only band member getting inked. Resident bad boy Zayn Malik is rumored to have eight tattoos and counting, ranging from Arabic etchings to a large microphone on his forearm. Other young celebs jumping on the body art bandwagon include Justin Bieber, who revealed a large tattoo of Jesus on his calf earlier this year, and Demi Lovato, who reminds herself to remain positive with the words "Stay Strong" tattooed on her wrists.

In honor of Harry (and just for fun), we put together an unofficial guide to all of One Direction's tattoos. Click through the slideshow below for the full scoop (and photos!) for the 15.

Do you like Harry and Zayn's tattoos? Would you ever get a tattoo? Sound off in the comments below or tweet @HuffPostTeen! 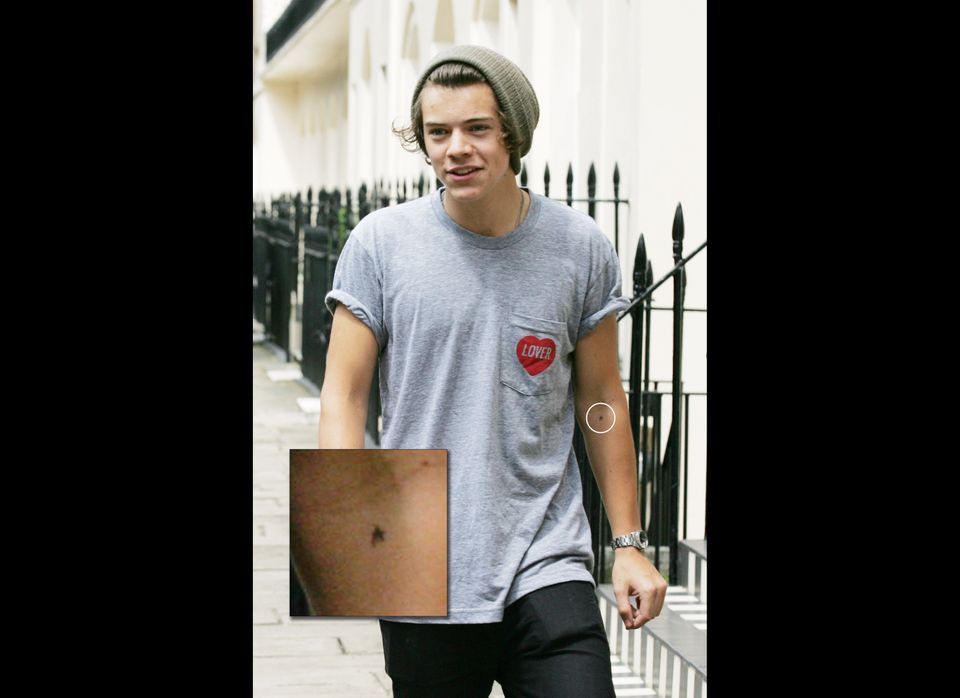 1 / 11
Harry Styles
Harry has a small A inked near his elbow, reportedly done by bandmate Zayn Malik. He <a href="http://www.unrealitytv.co.uk/x-factor/one-direction-2012-harry-styles-admits-zayn-malik-gave-him-a-tattoo-liam-payne-pushes-niall-horan-to-the-ground/" target="_hplink">revealed</a> that the tattoo is a tribute to his mom, Anne Cox.
Simon James, FilmMagic