That's hardly news for long-time followers of the controversy surrounding mountaintop removal, a coal mining practice that involves blowing off the tops of mountains to access thin seams of coal and dumping the waste into valleys below. In 2010, a group of 13 prestigious biologists published a paper in Science, the nation's premier scientific journal, that found:

The authors of the study published last week found a 50 percent decline in the number of fish species and a two-thirds decline in the total number of fish in streams below mountaintop removal mines in West Virginia's Guyandotte River drainage. They made this important contribution to the science by using rigorous methodology to isolate several types of water pollution most likely to have caused these staggering declines.

But a more important contribution of the study may be that it draws the focus of water pollution impacts away from mayflies and other aquatic insects and onto a far more popular and charismatic organism that not only is important to rural people's way of life, but supports a multi-billion dollar sportfishing industry in Appalachia.

Tellingly, industry spokespeople contacted by local reporters did not dispute the science as they typically have in the past. Those that didn't dodge reporters entirely were quick to change the subject to the purported benefits of mountaintop removal to create more flat land for industrial and commercial development (in a region where less than 10 percent of the more than 1 million acres of mountains that have already been flattened has been used for economic development).

This muted response is in stark contrast to the coal industry's response to previous science linking mountaintop removal to the loss of aquatic insects downstream from mine sites. The "EPA puts mayflies ahead of jobs" or "pests over people" became the rallying cries of coal industry supporters when the EPA first began bringing science back into the permitting process in 2009.

One suspects that the coal industry knows it isn't likely to win a "jobs vs. fish" debate with America's 33 million anglers.

Widespread damage to fish populations could also be important from the pocketbook perspective that political leaders in Kentucky and West Virginia take seriously. According to data [PDF] from the American Sportfishing Association, recreational fishing creates a lot more jobs than mountaintop removal does in the states where it occurs: 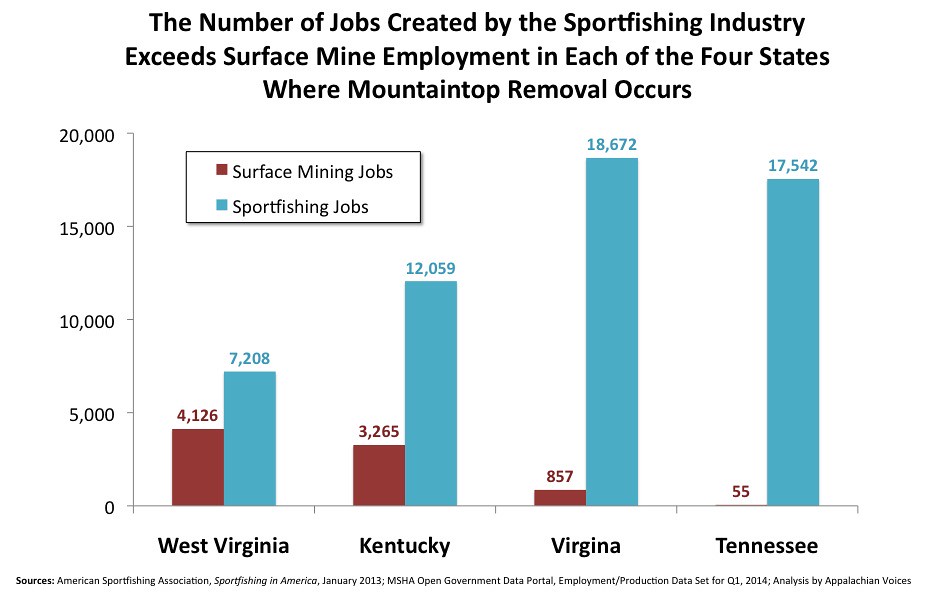 In fact, sportfishing accounts for more than 12,000 jobs in Kentucky, which is more than the entire coal mining workforce in the state, including all underground and surface miners, preparation plant workers and office workers combined. Moreover, unlike coal, sportfishing is a growing industry in Appalachia -- the number of jobs it created in West Virginia more than tripled between 2001 and 2011.

Of course, even if "jobs vs. fish" were a winning frame, it would be just as false a narrative as "pests over people." Declines in populations of both fish and aquatic insects are important indicators of declining health of an ecosystem on which all organisms depend, including people. The "ecological indicator" theory is consistent with the dozens of scientific studies published in the last few years that show communities near mountaintop removal mines suffer poor health outcomes ranging from high rates of cancer, respiratory illness, heart disease and birth defects to low life expectancies that are comparable to those in developing nations like Iran, Syria, El Salvador and Vietnam.

Thus, the USGS study is an important contribution to the debate about mountaintop removal for anyone concerned about recreational fishing, human health or the economy of Appalachia. Hopefully that's everybody.

It's also a very timely contribution because it turns out that the EPA and other federal agencies are right now grappling with important rules to protect streams that will determine whether the pollution that leads to the kinds of declines in fish populations seen by the USGS researchers will be allowed to continue.

The pollutants showing elevated levels in waters downstream from mountaintop removal mines that the researchers believed could account for the declines in fish populations were conductivity (a measure of metals and salts in water) and selenium, a pollutant that has caused grotesque deformities in larval fish ranging from s-curved spines and double-headed larvae to fish with both eyes on the same side of their heads. 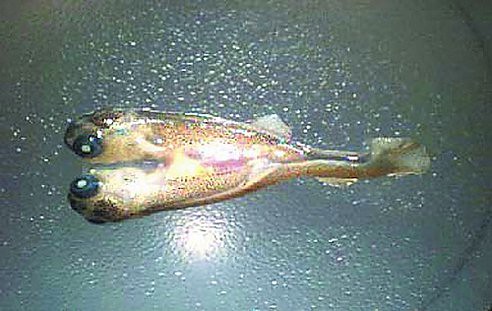 This study should serve as a wake-up call to federal regulators that have been steadily backsliding from the Obama administration's initial commitment to put science first in agency decision-making and to rein in the widespread damage from mountaintop removal mining. That backsliding has been particularly evident at the EPA's Region 4 headquarters in Atlanta, which oversees Clean Water Act permitting for a number of southeastern states including Kentucky.

Enforcement officials at Region 4 have not incorporated the science and recommendations developed by the EPA for the guidance on conductivity since it was announced by previous EPA Administrator Lisa Jackson in 2010. At the time, Jackson predicted the new guidelines would allow "few, if any, valley fills" to be permitted. Since then, valley fills -- debris piles composed of the soil and rock that formerly made up the mountaintops of Central Appalachia -- have continued to be approved by Region 4, including a massive new mountaintop removal permit with six valley fills that was approved last year.

Region 4 officials also recently approved a weakening of Kentucky's standards for chronic selenium levels in streams, allowing the state to permit levels high enough to cause reproductive failure in some fish. Worse, at the federal level, the EPA recently released a draft revision to its nationwide selenium rule that is likely to be all but impossible to enforce. That's a particular problem in states like Kentucky that have proven time and again to be incapable of enforcing rules on the politically powerful coal industry without citizen groups intervening. Here's what the Lexington Herald-Leader had to say about the state's "failure to oversee a credible water monitoring program by the coal industry":

"In some cases, state regulators allowed the companies to go for as long as three years without filing required quarterly water-monitoring reports. In other instances, the companies repeatedly filed the same highly detailed data, without even changing the dates. So complete was the lack of state oversight it's impossible to say whether the mines were violating their water pollution permits or not."

Fortunately, the administration has an opportunity to take meaningful action to protect Appalachian streams this winter, when the Office of Surface Mining is scheduled to release a draft Stream Protection Rule to replace the outdated Stream Buffer Zone rule promulgated more than 30 years ago.

The message for the Obama administration from all this is that they are doing nobody any favors by taking half-measures to protecting water quality in Appalachia. When important recreational fish populations, a growing sector of the Appalachian economy and the health of Appalachian people clearly depend on strong water quality protections, the president's spirit of compromise should not extend to compromising on science.

Here's what you can do: tell President Obama to instruct his agencies to draft a strong Stream Protection Rule that will prohibit mining near streams and protect the health of people, fish and the economy of Appalachia. Take action here.

Cross-posted from the Front Porch Blog.