Thirty years ago, I attended Boys State. Run by the American Legion, Boys State introduces high school students to civics and government in a climate that bears a passing resemblance to military basic training. Arranged in "companies," we students did our share of hurrying up, lining up, and waiting (sound preparation, in fact, for my career in the military). I recall that one morning a "company" of students got to eat first because they launched into a lusty rendition of the Marine Corps hymn. I wasn't angry at them: I was angry at myself for not thinking of the ruse first.

Today, most of my Boys State experience is a blur, but one event looms large: the remarks made by a grizzled veteran to us assembled boys. Standing humbly before us, he confessed that he hoped organizations like the American Legion and Veterans of Foreign Wars would soon wither away. And he said that he hoped none of us would ever become a member of his post.

At first, we didn't get it. Didn't he like us? Weren't we tough enough? (Indeed, I recall that one of our adolescent complaints was that the name "Boys State" didn't seem manly enough.)

Then it dawned on us what the withering away of organizations like the American Legion and the VFW would mean. That in our future young Americans would no longer be fighting and dying in foreign wars. That our world would be both saner and safer, and only members of an "old guard" like this unnamed veteran would be able to swap true war stories. Our role would simply be to listen with unmeasured awe and undisguised thanks, grateful that our own sons and daughters no longer had to risk life or limb to enemy bullets and bombs.

It pains me that we as a country have allowed this veteran's dream to die. We as a country continue to enlarge our military, expand our foreign commitments, and fight seemingly endless wars, whether in Iraq, Afghanistan, or in other far-off realms of less-than-vital interest to us.

As a result of these wars, we continue to churn out so many new veterans, including so many wounded veterans, not forgetting those who never made it back.

Collectively, we Americans tend to suppress whatever doubts we have about the wisdom of our wars with unequivocal statements of support for our troops. And on days like Veteran's Day, we honor those who served, and especially those who paid the ultimate price on the battlefield.

Yet, wouldn't the best support for our troops be the achievement of the dream of that grizzled vet who cut through a young man's fog thirty years ago? 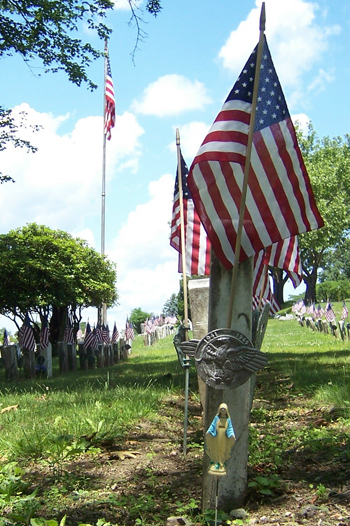 Shouldn't we be working to achieve a new age in which the rosters of our local VFWs and Legion posts are no longer renewed with the broken bodies and shattered minds of American combat veterans?

Sadly, as we raise more troops and fight more wars, we seem committed to the opposite. Our military just enjoyed its best recruiting class in years. This "success" is not entirely surprising. It's no longer that difficult to fill our military's expanding ranks because many of our young men and women simply have little choice but to enlist, whether for economic opportunity, money for college, or benefits like free health care.

Many of course enlist for patriotic reasons as well. Yet the ease of expanding our military ranks during a shooting war is also a painful reminder of the impoverishment of opportunities for young, able-bodied Americans - the bitter fruit of manufacturing jobs sent overseas, of farming jobs eliminated by our own version of corporate collectivization, of a real national unemployment rate that is approaching twenty percent.

On this Veteran's Day, what if we began to measure our national success and power, not by our military arsenal or by the number of new recruits in the ranks, but rather by the gradual shrinking of our military ranks, the decline of our spending on defense, perhaps even by the growing quiet of our legion posts and VFW halls?

Wouldn't that be a truer measure of national success: fewer American combat veterans?

Wouldn't that give us something to celebrate this Veteran's Day?

I know one old grizzled veteran who would quietly nod his agreement.

Professor Astore currently teaches History at the Pennsylvania College of Technology in Williamsport, PA. He writes regularly for TomDispatch.com and can be reached at wastore@pct.edu.