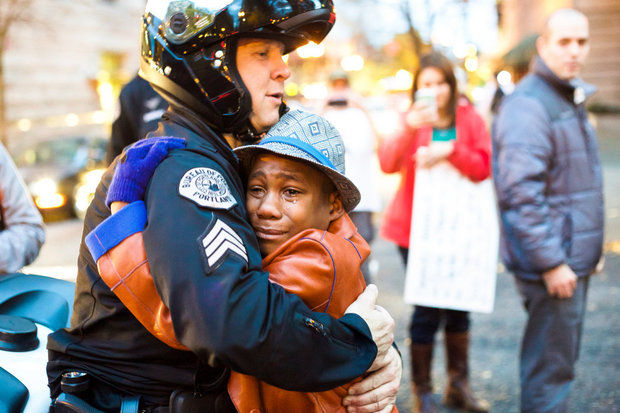 Love without justice is pure sentimentality. Our Christian Advent message, by contrast, needs to be about the complex and difficult relationship between love and justice, as challenging as that may be to preach and to hear.

This photo of Sgt. Bret Barnum hugging 12-year-old Devonte Hart during a Ferguson rally in Portland, Oregon on November 25, 2014 has gone viral.

It is called "the hug that was shared around the world."

This touching encounter can seem tailor-made for the Christian season of Advent, the preparation for the birth of the Christ child, and for a message of hope for humanity. White Americans in particular love the hug since it seems to convey the spiritual message that "all will be well" in our racial relations because "Love Conquers All."

Without some additional biblical and theological work, the "hug" can just "hook" white Americans like me, creating an opportunity to feel good without doing the far more difficult and challenging work of changing the systems of racial injustice that gave rise to the demonstration in Portland, Oregon to begin with.

Individual acts of kindness are necessary, but not sufficient to address the deeply rooted, and widespread pattern of racism that results in lethal violence against unarmed teenagers, as well as in a lack of prosecution of police who kill unarmed teenagers. It is necessary but not sufficient to address the thousands and thousands of micro-aggressions with which African Americans have to live on a daily basis, as Kiese Laymon, a Vassar professor, writes so powerfully.

Let us consider that the Christian season of Advent, the "getting ready" for the birth of the Christ child, really begins with "Mary's Song," when Jesus' mother Mary sings about what her pregnancy means for the world.

The song is not what we might expect from a young woman happy because she is pregnant. It is structured around the judgment of God on injustice. The "Mighty One" has "brought down the powerful from their thrones, and lifted up the lowly." God has "filled the hungry with good things, and sent the rich away empty." (Luke 1: 52-53)

Mary, the mother of Jesus, announces the birth of Jesus with a trenchant critique of unjust political and economic power.

Racism as a system of prejudice backed up with power is how white Americans have accrued economic privilege, and sustained that privilege through divisive politics. Ironically enough, many white Americans fail to see that this racist political privilege mostly delivers economic benefits to the actual "powerful on their thrones" and facilitates a economic strangle-hold on everybody else. But with "everybody else" divided by race and class, no coherent political challenge can be mounted.

This whole system is challenged by the birth of Jesus of Nazareth, the incarnation of the justice and peace of God.

The "powerful" and the "proud," sitting on their thrones, are threatened by the challenge to entrenched and unjust political power the birth of Jesus portends. They are so threatened, in fact, that in another Advent text, we learn that when King Herod hears of the impending birth of Jesus, he "was frightened" and he sent "Wise Men" to find out exactly where and when Jesus would be born so he could kill him. Don't get distracted by the glittery gold presents (or the frankincense and myrrh). Remember this was a disguised death threat, and the wise men wisely do not return to Herod. Herod, not to be deterred in his lethal grip on power, kills a large number of children. (Matt. 2: 1-18)

There are good people in every walk of life. The "Wise Men," for example, were good people and they did not return to Herod and reveal where Jesus and his family could be found. Thank God. But individual acts of kindness do not end the murderous system of unjust rule. Many, many children were still killed according to our Christmas texts.

Celebrate an individual act of kindness by a Portland, Oregon police officer. But don't fail to ask yourself, "Why is that African American child crying?"

Jesus came as a child whose life was immediately placed at risk by abusive political power. Jesus announced God's reign of Justice and Mercy.

Preach and hear both messages this Advent, and then we will truly have hope.