It has been nearly one hundred years since April 24, 1915 -- the infamous day when Armenian intellectuals of the Ottoman Empire were rounded up in the dead of night and sent to be executed in inland concentration camps in Ayash and Chankari. This event followed on nearly two decades of ethnic cleansing and pogroms against Armenians that included the murder of some 300,000 Armenians by Sultan Abdul Hamid in 1896 and 30,000 killed during the Adana Massacre in 1909. 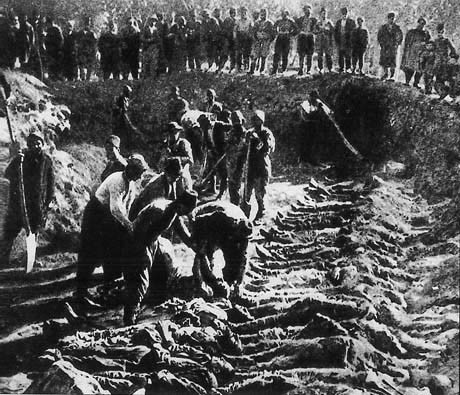 The 1896 Erzerum Massacres of Armenians

In the ensuing decade, the entire Armenian Plateau and the rest of the Ottoman Empire was ethnically cleansed of 1.5 Million Armenians as well as 1.5 million Assyrian and Pontic Greeks--nearly the entire empire's Christian population. Christians were rounded up and locked inside churches that were set on fire and burned alive or thrown into caves with sulfur thrown on top of them and cremated in primitive gas chambers. The Turks, aided and abetted by their ally the German Kaiser seized Christian properties and bank accounts, raped and enslaved women and children and forced thousands to convert to Islam under pain of death. The vast majority of the Armenian population was deported to concentration camps in Syria--a thousand-mile trek through the desert that few survived. Those that did often ended up dying of disease and malnutrition. The local Arab population recalls seeing the Armenian survivors straggle in emaciated and famished like wild animals, emerging from the desert sands like some frightening army of living dead. Many fell to their knees and broke down, invoking the name of all-powerful Allah to ask what could possibly have befallen these poor refugees.

One hundred years of official Turkish state denial have left Armenians alone and bitter, but all over the world, this Christian people known as the "Jews of the Caucasus" have rebuilt communities and prospered as they have in Soviet and now independent Armenia. The reasons behind the Armenian Genocide include a surreal mix of ethnic and financial jealousy--the Armenian Amira class for example ran everything from the state mint to the bread factories and most of the empire's industry, while the Greeks and Levantines were the most successful diplomats and merchants as well.

Taking advantage of Christian missionary zeal in the Empire, Armenians were also its most educated element. The Turks, who had lost the entire Western part of their empire during the Serbian and Greek Wars of Independence reacted to the cloak of opportunity presented by WWI when the West had other concerns, to launch a veritable full-scale jihad against the infidel dhimmi or non-Muslim minorities.

A century later we know that unfortunately genocide is not a Turkish specialty, though they carried theirs out with a sometime grotesque zeal, releasing prisoners and the insane from jails so that the Armenians and other Christians would be massacred with particular viciousness. The Holocaust of the Jews in World War Two, the killing fields of Cambodia, the Bosnian cleansing by Serbs only twenty five years ago and most recently the Rwandan Genocide when brother tribes of Hutu set upon their Tutsi brothers, hacking people to death by the thousands with primitive machetes, lead us to the unfortunate conclusion that the genocidal instinct is deeply ingrained in human DNA. As the theorist Marc Nichanian has pointed out elsewhere, what was the Trojan War if not an example of early ethnic cleansing as the Greeks laid waste to Troy's entire population, also of Hellenic ethnicity?

Today, Nicholas Kristof and other leading journalists bring us news of another frightening instance of ethnic cleansing -- this time of the Muslim Rohingya minority in Myanmar. Reacting against the supposed fear of Muslim fundamentalism and population rates in Myanmar, the Rohingya have been rounded up and put in primitive camps without access to any medical treatment and insufficient food. They are often tortured. Women are dying in childbirth. To me, perhaps the most shocking aspect of this genocide-in-progress is that it is being carried out by Buddhists, led by the particularly controversial monk Wirathu, who heads the "969 Movement" and is quoted in a New York Times Op Doc as saying that the Muslim Rohingya minority "reproduce like fish (rabbits) and should all be killed."

As someone who practices Buddhist meditation and who has always admired Buddhism for its emphasis on peace and non-violence, these stomach-turning events are particularly sickening. Where is the West during all this? Where is President Obama? Even more reprehensible is the silence of Nobel Laureate and famed dissident Aung San Suu Kyi of Myanmar, who was jailed for years by that country's military junta and that of the country's current president Thein Sein who denies that the Rohingya are being persecuted. To date, the Rohingya have not yet been exterminated, but they will if we do not speak up. So please when you read these words, write your senators and representatives. Write Samantha Power at the U.N. and anyone else in your community who wields political and/or religious authority and tell them: STOP THE GENOCIDE OF THE ROHINGYA people. Speak up now or forever hold your peace. And rest assured, if you do not, one day you or your descendants or those of someone you know may unfortunately find themselves in a similar situation -- as history does indeed have the unfortunate habit or repeating itself.

For more Information on Twentieth Century Genocides, please consult Samantha Power's contemporary classic A Problem from Hell: America and the Age of Genocide and Raymond Kevorkian's brilliant The Armenian Genocide: a Complete History