I published this article here on HuffPo almost a year ago -- and the resounding backlash from the right wing (both fringe and otherwise) was resounding. Today, in the wake of the horrors at a Safeway in Arizona, makes me wonder -- was I so wrong?

My fear -- that vitriol in the media was sparking more unstable individuals to view violence as a viable option for political change -- may have been realized here. My point is not that people like Glenn Beck or Team Party leaders seek violence, but that their words are creating the exogenous conditions that may lead a more unstable person to act.

Sheriff Clarence Dupnik, speaking about the Massacre in Arizona:

"When you look at unbalanced people, how they respond to the vitriol that comes out of certain mouths about tearing down the government. The anger, the hatred, the bigotry that goes on in this country is getting to be outrageous. And, unfortunately, Arizona I think has become sort of the capital. We have become the Mecca for prejudice and bigotry.

"It's not unusual for all public officials to get threats constantly, myself included. And that's the sad thing of what's going on in America. Pretty soon, we're not going to be able to find reasonable, decent people who are willing to subject themselves to serve in public office."

My original article continues below:

Originally published at Demagogues and Dictators

With the passing of health care reform in the US House, the rhetoric emerging from the American political right has reached new heights. From the yelling of Minority Leader "Hell No You Can't" Boehner in the House to the homophobic and racial slurs hurled by protesters outside the capital building, one thing has become even more clear: as the more mainstream conservative movement becomes more frustratedly vocal, the likelihood of domestic terrorism has unintentionally risen, and has done so exponentially.

While the attack will not come from the Tea Party proper, more radical members and affiliated groups that have allied themselves with the movement are beginning to mobilize.

The fringes are restless.

Worse yet, the fringes have been empowered by a frustrated conservative mainstream desperate for popular support. Now, conservatives may have whipped up the kind of anger that cannot be put back in the bottle. What began as the corporate funded, Dick Armey led, FreedomWorks organized, anti-health care rallying Tea Party movement has grown into something beyond what its founders intended.

The Tea Party (if we can call it such) has entered into a series of loose alliances (of convenience or common purpose) with fringe groups like The Oath Keepers, the Committees of Safety, and the Three Percenter Movement (to name a few) While the rhetoric from Tea Party groups is vitriolic, its protests (to date) have been predominantly non-violent -- but while many Tea Party protesters may be peaceful, their rhetoric, and the rhetoric of fellow traveler politicians like Rep. Bachmann and former Gov. Sarah Palin, is echoing through the Tea Party to its fringe elements -- and the threat of domestic terror from these groups, or individuals who belong to them, has risen exponentially.

Tea Party connections with the Oath Keepers, Committees of Safety, and the Three Percenter Movement, place these politicians very few degrees from radical white supremacists. The Oath Keepers have attempted to recruit on both the Keystone State Skinheads forum and the odious Stormfront.org; and Three Percenter Movement lists its values as follows:

The Three Percent are the folks the Founders counted on to save the Republic when everyone else abandoned it. And we will. There will be no more free Wacos and no more free Katrinas.

For we are the Three Percent. We will not disarm. You cannot convince us. You cannot intimidate us.

You can try to kill us, if you think you can.

But remember, we'll shoot back .

We are not going away. We are not backing up another inch. And there are THREE MILLION OF US.

For those of you questioning the connections between these movements, I invite you to follow the incredible work that
Mother Jones has done investigating the linkages
Advertisement
that tie the Tea Party to groups like the American Resistance Movement, and the Gun Owners of America.

The fact is this: in the past week, as the Tea Party Movement has sought to disavow violence while embracing non-violent intimidation -- its rhetoric has been echoed in the most dangerous corners of America. When Minority leader Boehner speaks about a fellow politician like this:

"Take Steve Driehaus, for example. He may be a dead man. He can't go home to the west side of Cincinnati."

his political assessment is trumpeted by Tea Party Blogs, which are linked on, and interpreted by readers in the radical violent fringes of the nation.

When the home phone numbers and addresses of pro-health care reform Democrats are disseminated with the purpose of intimidation by Tea Partiers, they are collected for violent purposes in the far echoes of the movement.

The next attempted terrorist attack in this country could likely come from one of its citizens.

Take a look at the past few days:

Friday, March 18:
Mike Vanderboegh, the former commander of the Alabama Constitutional Militia, Three Percenter, and member of the Oath Keepers, called for his modern "Sons of Liberty" to begin an organized campaign of violence against democratic offices across the country on his blog:

So, if you wish to send a message that Pelosi and her party cannot fail to hear, break their windows.

The time has come to take your life, your liberty and that of your children and grandchildren into your own two hands and ACT.

It is, after all, more humane than shooting them in self defense.

And if we do a proper job, if we break the windows of hundreds, thousands, of Democrat party headquarters across this country, we might just wake up enough of them to make defending ourselves at the muzzle of a rifle unnecessary.

Sons of Liberty, this is your time. 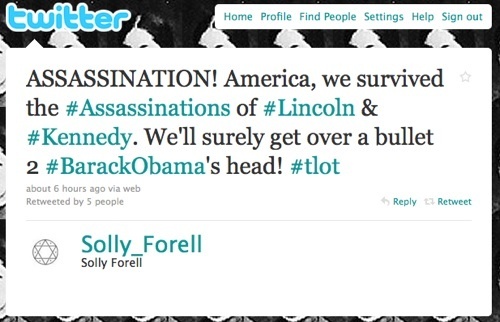 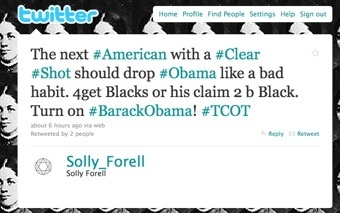 Monday 3/22
Orange Country Pastor Wiley Drake declares that all 219 House Democrats who supported health care reform had been placed on his "imprecatory prayer list" for inhabiting "Satan's domain in Washington DC". He told his followers "We'll remember in November and pray Psalms 109 while waiting".

May his days be few; may another take his place of leadership...May his children be fatherless and his wife a widow.

Tuesday 3/23
Rep. Tom Perriello (D-Va.)'s brother discovered that the gas line connecting a propane tank to an outdoor grill at his home near Charlottesville, Va., had been severed -- a few days after a Virginia Tea Party group had mistakenly posted the Rep's brother's address as his own. Mike Troxel, the poster of the address, invited his fellow Tea Partiers to

Rep. Perriello's brother has four children under the age of 8.

A map using crosshairs to target those pro-reform democrats she hopes to unseat. Ms. Palin called for her supporters to both "reload" and "take aim".

Thursday 3/25
Rep. Louise Slaughter (D-NY) reports that threats have been left for her mentioning "snipers" assassinating the children of lawmakers who supported health care reform.

Rep. Betsy Markey (D-CO) was told (via a call to her staff) that she

better hope I don't run into you in a dark alley with a knife, a club or a gun.

Rep. Bart Stupack (D-MI) released audio of phone threats he has received both at home and at his offices. Two such calls go as follows:

"There are millions of people across the country who wish you ill, all of those thoughts that are projected on you will materialize into something that's not very good for you."

These are only a few of the troubling pieces of information that are most likely littering the desks of FBI Counter-Terrorism analysts around the nation today.

This troubling combination of domestic terrorist chatter and escalating violent actions points to a dangerous coming event -- especially with Patriots Day around the corner. What for some of us is a day to remember the battles of Lexington and Concord, means something very different to the right wing violent fringe movement.

April 19, also known as "Militia Day" -- the day of the fire in Waco, the first day of Federal involvement at Ruby Ridge, the day of the Oklahoma City Bombing.

This April 19 will see an armed "Open Carry" rally outside of Washington DC - run by the Three Percenter Movement, and a major Gun Owners of America armed march (sponsored by the Oath Keepers) through the capital's streets, not to mention a pro-gun march in California.

Lets all hope that a combination of cooler headed leaders and vigilant and efficient law enforcement will ensure that any attempted domestic terrorism will be averted -- or so marginalized as to be ineffective and without casualties.