While men and women both agree that sexism exists in the workplace, both sexes appear to be in denial about how that discrimination affects their pay, according to the results of a new poll.

When the Elle survey asked why there weren't more women in top spots in business, the numbers looked different. Fifty-five percent of women and 33 percent of men blamed workplace discrimination.

A big gender wage gap does exist in the United States and likely applies to many of us. The median earnings of women is lower than men in nearly every occupation, according to the chart below by the Institute for Women's Policy Research. Women in the top 20 most common professions earned 80.9 percent of what men earned in those same positions. 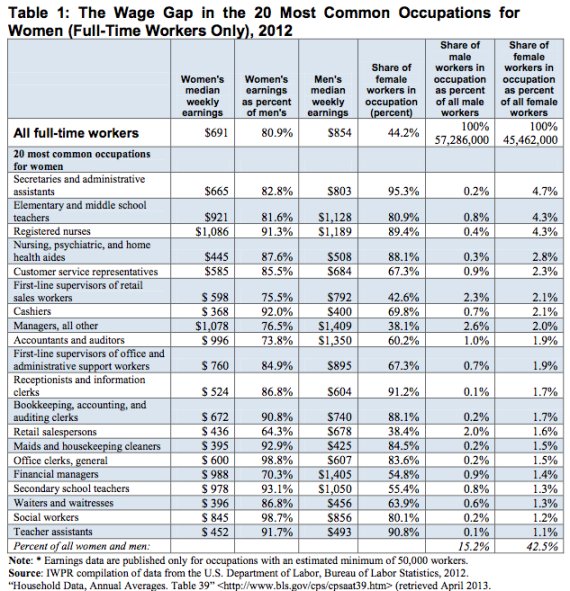 Some have explained America's persistent gender gap as a result of women being more likely to seek part-time jobs, work in jobs that pay less and take longer breaks from work (due to maternity leave and childcare needs), according to Bloomberg View.

Yet still today, 97 percent of full-time female workers are employed in positions that pay men more on average, according to the Center For American Progress. And while pointing to factors like job selection and work experience can account for 60 percent of the gender gap in wages, a large chunk of about 40 percent still cannot be explained by any statistic, according to the Center for American Progress.

These and the rest of the 2012 Power Survey results can be found on Elle.

World's Most Powerful Women In 2013: Forbes