UPDATE: 4pm EST: The 14 Kentucky Rising anti-mountaintop removal protesters declared a triumphant end to their historic sit-in, emerging today in front of a cheering throng of over 1,200 supporters on the steps of the Frankfort capitol.

"We came because the land, its forests, and its streams are being destroyed by the surface mining of coal, because the people are suffering intolerable harms to their homes, their health, and their communities," declared celebrated author Wendell Berry, who had joined other eastern Kentucky coalfield residents, miners, writers and community activists.

Looking at the nationwide impact of the sit-in, which has sparked a call for widespread protest across the coalfields, historian and author Chad Berry called the historic four-day sit-in and rally a "bellwether moment" and a turning point in the growing movement to end mountaintop removal mining.

"Instead of looking at the past," added Chad Berry, a renowned Appalachian scholar, "we are now looking toward the future. A future without mountaintop removal, and a future for clean energy and sustainable economic development." 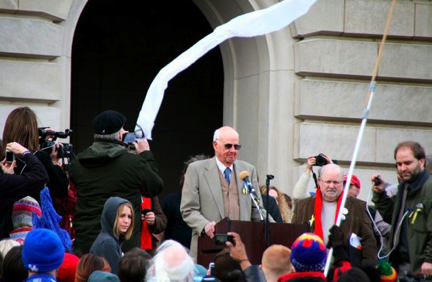 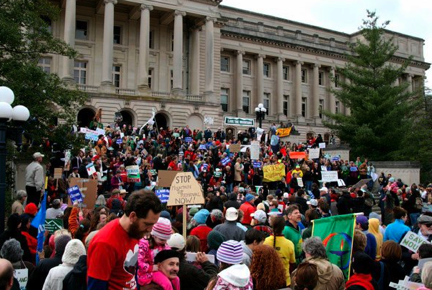 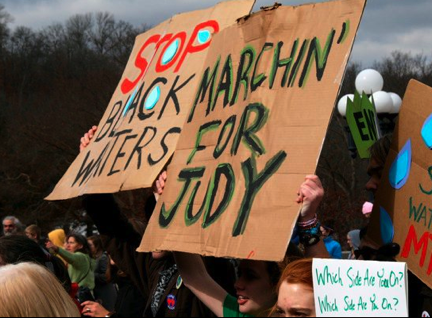 Day 4 of the historic sit-in: Valentine's Day in the Kentucky governor's office.

As thousands of protesters descend on the Kentucky capitol in Frankfort today for the "I Love Mountains" march to end mountaintop removal mining, the 14 sit-in Kentucky Rising protesters inside the governor's office have electrified the clean energy movement across the nation with an unflinching and inspiring valentine for the country:

This is the year to end mountaintop removal mining.

Talk about "one love." Across the 48 states that rely on coal-fired electricity, we are all connected to the egregious human rights and environmental crime of mountaintop removal mining.

Every reader can simply go to this website and enter his or her zip code and see their connection to coal-fired electricity supplied by coal strip-mined from mountaintop removal or other strip-mining operations.

Despite limited EPA moves to reduce the damage of mountaintop removal operations to waterways and communities, devastating mountaintop removal mining, which provides less than 5-8 percent of our national coal production, takes place in eastern Kentucky, West Virginia, southwest Virginia and eastern Tennessee. Across the heartland and the Powder River Basin, from Alaska to Alabama, strip-mining operations are at work in 24 states and Native American reservations.

After occupying Gov. Steve Beshear's office for the weekend, the sit-in protesters have galvanized coalfield residents and clean energy advocates across the nation to revamp the movement to end the 40-year nightmare of mountaintop removal once and for all. 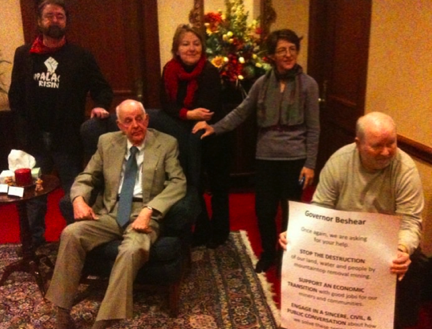 In a joint statement, the Kentucky Rising activists declared: "We find it unacceptable for an elected official to sue a federal agency with taxpayer dollars on behalf of a multi-billion dollar industry that is responsible for poisoning the land, water, and people of Appalachia."

"It's disappointing that Gov. Beshear is choosing to play election-year politics with the lives and livelihoods of eastern Kentuckians," the group said in a joint statement. "Political courage is rare nowadays, and sadly appears to be absent from our Governor's Mansion. We continue to call on him to engage in a sincere, public dialogue about ending mountaintop removal and beginning a program of economic renewal for our miners and mountain communities."

The protesters have been staying in the office since talks between them and the governor came to a stalemate on Friday afternoon, when Gov. Beshear finally agreed to meet with them after initially refusing to do so that morning. After repeated requests from group members, he pledged to travel to eastern Kentucky and inspect damage caused by mountaintop removal mining. Despite this, Gov. Beshear continued to express his steadfast support for both mountaintop removal and the coal industry.

A live stream of the sit-in at the governor's office can be seen here.

Stay tuned for live updates at the day's events unfold.