Heather Armstrong is celebrating an anniversary. It's been eight years since she was told to pack up her things in a little brown box and get the hell out of the office where she worked as a Web designer.

Her offense? Writing about her boss and coworkers on the Internet.

"It's not a good idea," Armstrong warns. "But I'm almost kind of grateful that it happened because of the success that has come afterwards."

Success indeed. The day Armstrong was fired, traffic to her blog, Dooce.com, quadrupled as people flocked to her site to offer support or criticism. Since then, she has continued to take the Blogosphere by storm. The 33-year-old stay-at-home mom's cheeky and comical (albeit occasionally profane) writings on commonplace topics from dirty diapers to temper tantrums garner over 4 million page views per month, solidifying her position among the Web's top 100 blogs.

"My Web site has always been about my life," says Armstrong. "But it's always been written with an irreverence for life that some people feel themselves, but are afraid to express."

While other parenting bloggers are more reserved and choose to keep their private lives--well--private, Armstrong holds back nothing. Some people find Armstrong's posts offensive, but the majority of her readers have responded positively to her candor, including the outpouring of encouragement from her followers when she wrote about her decision to check into a mental hospital for postpartum depression.

"It was a very uplifting experience to share that with my readers," she says. "It's a good Internet story."

By letting people into her life, Armstrong has created a close bond with her readers. And it's this loyal fan base that keeps the advertisers coming back for more. Since Armstrong began accepting ads on her Web site in 2005, her husband Jon has been able to quit his job at a software company to run the administrative end of Dooce. So this makes us wonder...how much is the site making from ad revenue?

It's estimated that her blog produces $40,000 a month, says Shani Higgins, Vice President of business development at Technorati, an Internet search engine for blogs.

Excuse our drool, but $40K a month to stay in your pajamas and write about your life?! THAT SOUNDS AWESOME.

Armstrong, however, will tell us to wipe off the slobber and hold the awesomeness for a second. The life of a full-time blogger is not all fun and games, she confesses. Although she considers herself lucky for finding success in the Blogosphere, Armstrong admits the job is extremely stressful. She never gets to take a break.

"It's all consuming," she says. "I don't ever leave it. It's always there and I'm always working on it. I don't ever get to take a vacation. Your audience is always waiting for your next update, and if you don't update, ohhh do you hear about it."

However, Armstrong believes posting "persistently and consistently" is the key to success. By updating her Web site at least once a day, Armstrong's readers continually check Dooce for new material.

When Armstrong missed posting regularly one time, she says her followers got a wee bit upset. "People thought I had died when I didn't post for two days," she remembers. "I had to tell everyone to calm down. I haven't posted cause I'm sick. It happens."

Before she puts anything on her site though, Armstrong acknowledges that she thinks long and hard about the overall "Dooce product." Each thing she posts has to be worth visiting her Web site for.

"I approach it as if it's Friday night and I'm sitting down with my girlfriends to talk about what happened during the week," she says. "How would I tell them in a really funny way so they're going to laugh? It's a good way to filter out the crap that gets put on a lot of other blogs."

Crap or no crap, Armstrong still receives hate mail and loathing comments from a select few of her readers. But revenge is sweet and she has found the best way to deal with the haters is to simply mock them. Like when a reader recently wrote Armstrong to tell her how much he disliked the re-design of her site.

That particular comment is now part of the large banner running across Dooce's homepage. It's the first thing you see when you enter the site. You can't miss it. 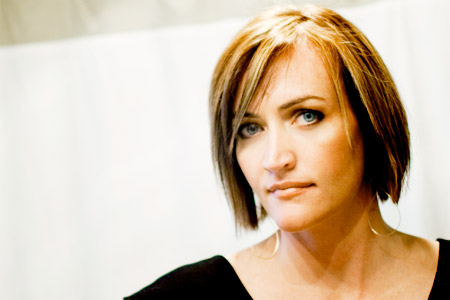