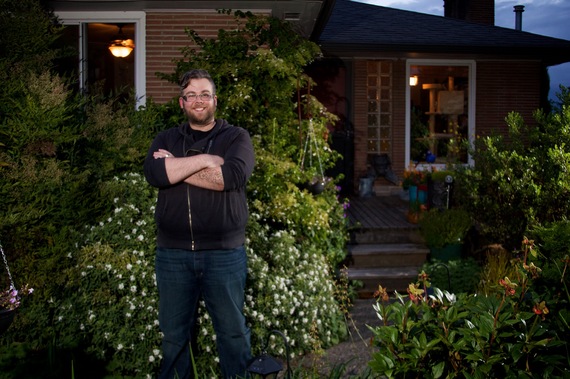 My weekly podcast, The Sewers of Paris, is all about the entertainment that changed the lives of gay men. This week's guest is Ben, who grew up feeling lonely and isolated as the family moved around the country every few years. His unhappiness deepened as he struggled to stay closeted, excel in classes he hated and attend a church that no longer held any appeal.

And then an unexpected film helped him turn his life around: Contact, starring Jodie Foster. The movie features an atheist scientist confronting the mysteries of the universe, and he realized that he didn't have to believe in God to be a complete person. And that helped him realize that he could question a lot of other things, too: his academic direction, his social circle, and the need to pose as heterosexual.

Today, he's a happy proud polygamous gay atheist. Those are a lot of labels, and required repeated confrontations with social stigmas. After all, being openly polygamous is a little unusual. Gayness is unusual. Atheists are unusual.

But experimenting with the unusual -- being unafraid to be different -- is what allowed Ben to find his authentic self.

So it's no surprise that the entertainment that we talked about on this week's episode of The Sewers of Paris are pretty unusual too. I put together a selection of music and movies that Ben recommended, some explicitly queer and others just queer in spirit. They're full of strange and disorienting images. But for those times that you feel stuck in a rut and need a little inspiration to try something different, a disorienting image might be just what you need.

We started with Loreena McKennitt, which is a sort of hippie folk music that Ben uses to set the mood when he plays Dungeons and Dragons:

And we also noted the similarities between Bjork and Joanna Newsom:

I also recommend the music videos of Michel Gondry, which are like paintings come to life. They will confuse you in ways that are fun to be confused.

He's also a fan of Run Lola Run, which imagines how a life of crime branches in various different directions depending on the choices that the characters make.

Then things got confrontational: which is the better and stranger film, Dune or The Fifth Element? I said Dune is better; Ben preferred The Fifth Element. Both sci-fi films are deeply symbolic and full of unsettling, unpredictable, ambiguous imagery.

As a kid, Ben's dad heard him listening to Tori Amos, hippie folk songs, and Japanese shamisen music, and told him, "you only like things because they're different, not because they're good."

At the time, Ben was closeted, lonely, unhappy with his life and and doubting his faith in God.

His dad was using the word "different" like it was a bad thing. But when you don't have friends, you're hiding in the closet, and your church has stopped making sense, anything that's "different" is bound to be an improvement.