Author Kenn Day found shamanism the way most modern shamanists do--through a need for personal healing. Depression, anxiety, and PTSD in his twenties led him from traditional therapies that brought little success, to a willingness to go a different route. Working as an Art Director for a local ad agency, he never expected that the healing and teachings he learned, he would then bring to others.

The word 'shaman' traditionally conjures images of a figure costumed in feathers or furs, and rattling bones or beating a drum. Such visuals still apply in the west, though the practice is largely considered a 'broken path,' the phrase applied to those not born into shamanic cultures, yet find their way to it as a spiritual tradition, through less direct means.

While he sees shamanism as a general term describing a spectrum of practices that are rooted deeply in the human condition, Day is careful to give credit where it's due. He describes his approach as post-tribal shamanism, a phrase he created to differentiate between forms of shamanism that were and are still practiced in tribal cultures, and those arising from the post-tribal culture he was raised in. "We can only stand strong when we honor those who come before us," he said, and emphasized awareness of cultural appropriation as significant to his work.

This distinction he takes to heart--and soul. Day makes a point of not passing on any of the teachings he's received from native teachers. He respects the difference between being taught tribal spiritual ways, yet not having been raised in a tribe with the freedom to pass on its teachings.

"It's important for people from the first world culture to recognize that we are much further from our tribal origins than many of us would like to acknowledge. Not that we don't have a tremendous amount in common with tribal people, but in some fundamental ways, we are also unique." Part of that uniqueness, he cites, as the modern lack of collective identity. "In tribal cultures, the most important unit is the tribe as a whole, while the individual is relatively insignificant. In our post-tribal culture, it is the individual which is predominant." 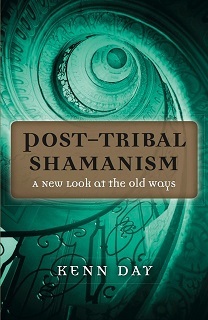 That said, Day acknowledges that shamanism in the modern context is a growing, thriving path. "We've laid some good groundwork, though perhaps the greatest challenge is education - the education of our society. There are wounds that impact our whole culture, as well as entire families. We need to find more ways to bridge post-tribal shamanism into the modern consciousness. Our community is all around us, but to most of that community, we are still invisible."

How Day creates community is through facilitating healing in others, and teaching classes in post-tribal shamanism. He also shares deeper insight into how shamanism is practiced in our first world culture in his latest book, Post-Tribal Shamanism: A New Look at the Old Ways.

Learn more about Ken Day and post-tribal shamanism at shamanstouch.com.

More:
GPS For The Soul