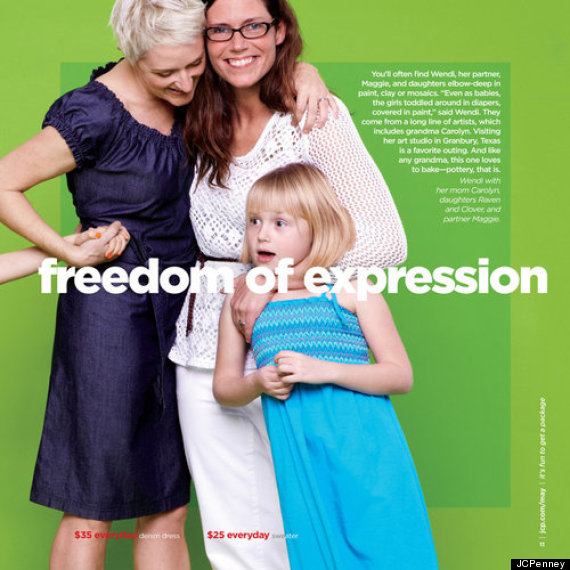 I don't know whether to be sad, angry, or amused. The group who calls themselves One Million Moms, despite comprising only 40,000 members or so, is after JCPenney again, this time because of their recent May mailer, which includes a photo of a lesbian couple with their two daughters.

They feel as if this means JCPenney is somehow taking sides, and they want them to take a "neutral stand." What would those sides be, exactly? Anti-gay vs. pro-gay? Right-wing vs. left-wing? Christian vs. otherwise? What these women are missing is that JCPenney is taking a "neutral" stand.

"JC Penney has laid low in the month of April by airing two different commercials that portrayed them as remaining neutral in the cultural war," OMM says on their site. In other words, JCPenney did not air ads showing any same-sex couples. And what "cultural war"? You mean the one you're waging for no reason other than homophobia?

In order to be "neutral," which JCPenney most certainly is, they have to be inclusive, which is precisely what they are doing. As a result, OMM claims that "[i]t is obvious that JCP would rather take sides than remain neutral." You mean by showing both gay and straight couples? I'm sorry, I don't get it. Showing both sides is taking sides? What? That's the definition of "neutral." (And, just as an aside, at least one of JCPenney's May TV ads features straight couples.)

In that case, I have to assume that OMM considers ads that show only straight couples to be neutral, but by their own reasoning that would actually make those ads anti-gay, or whatever it is One Million Moms is calling their side. If that's true, I've got a lot of protesting ahead of me.

The most ridiculous part is that they argue that they are "protecting" their children. From what, exactly? From seeing happy couples? From seeing companies being fair and inclusive? From seeing the reality of the world? If their children need to be protected from anything, it's from their card-carrying OMM mothers. Children should not be exposed to such rampant hate. OMM is a hate group like any other, but it shields itself behind its children. It's hideous, really, and insidious, as well. If you're going to be hateful, that's one thing, but using your children as an excuse for why you "have" to be hateful? Well, that's simply inexcusable. I feel such sadness for the OMM kids who have to witness such hate, especially when that hate is expressed in the name of God. I feel sad for the JCPenney store managers who may have to deal with harassment from OMM. And I feel sad for JCPenney execs, because they are doing the right thing, the responsible thing, the only thing that makes sense in 2012, and they are getting flack for it.

Not that I think JCPenney will lose any money in this little scrap. When OMM first lashed out about Ellen being the JCPenney spokesperson, I went right out and did some serious shopping at JCPenney, something I probably wouldn't have done otherwise. As a result, I was able to see all the changes that their new CEO, Ron Johnson, is making. I have to say: This ain't your mama's JCPenney. Dare I say things are looking pretty cool in there. And that's the bottom line: Johnson is leading the company toward modernity, and whether OMM likes it or not, being modern means being inclusive.

And I have news for you, OMM: Plenty of us in the LGBTQ community have big mouths and money to spend, and you are sending us all running to JCPenney.

(Full disclosure: One of the moms in the ad is an acquaintance of mine, and my girlfriend works at JCPenney.)