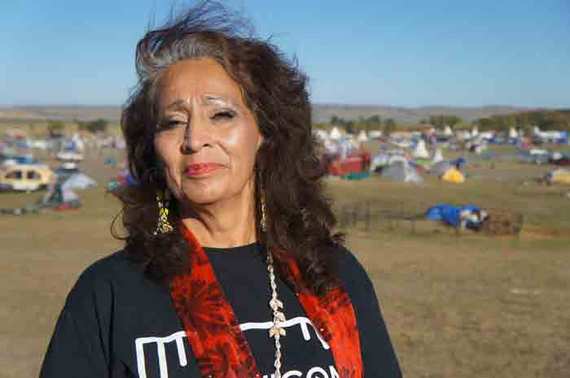 Tensions at Standing Rock Camp escalated last week. With intensifying clashes between law enforcement and the Dakota Access Pipeline protesters, members of the Standing Rock Sioux tribe and allies continue to stand strong. The pipeline's route threatens ancestral lands and risks environmental damage if the it leaks under the Missouri River. And the likelihood of a pipeline spill is troubling, as there have already been 220 'significant' pipeline spills already this year.

While this tragedy affects everyone, it is not always gender neutral. Women possess crucial reservoirs of knowledge, and their voices are needed because violent impacts by the fossil fuel industry are often disproportionate for Indigenous women and children.

Women's Earth & Climate Action Network, International's (WECAN), Emily Arasim and Osprey Orielle Lake recently collected interviews from 15 Indigenous women from across North America fighting to halt construction of the Dakota Access Pipeline. Emily and Osprey recorded their experiences, visions and calls to action for social and ecological justice. This is an excerpt from the original interview post on EcoWatch.

LaDonna Brave Bull Allard, founder of the Camp of the Sacred Stones, landowner along the proposed Dakota Access Pipeline route.

"On April first we started the Sacred Stone Camp to stand up against Dakota Access Pipeline. We have been here since then, standing up in prayer, doing our best to stop a pipeline that will damage our water. First and foremost we are water protectors, we are women who stand because the water is female, and so we must stand with the water. If we are to live as a people, we must have water, without water we die. So everything we do as we stand here, we must make sure that we do it in prayer, and that we do it in civil-disobedience. We do it with goodness and kindness in our hearts, but we stand up. We will not let them pass. We stand. Because we must protect our children and our grandchildren.

As a mom, it's really hard to lose a child, you are never the same, and so when my son died, I buried him on that hill over there, so that he would be right there to watch the mouth of the Cannon Ball and the Missouri Rivers. And when they told me they were going to build a pipeline I was like, I can't allow that, 'I can't allow anybody to put a pipeline next to my son's grave.'"

Please read 15 Indigenous Women on the Frontlines of the Dakota Access Pipeline Resistance.