I recently wrote an article titled "What I Learned From 10 Years of Doing PR for Apple" about my time with the company and the lessons learned there that I still value today: 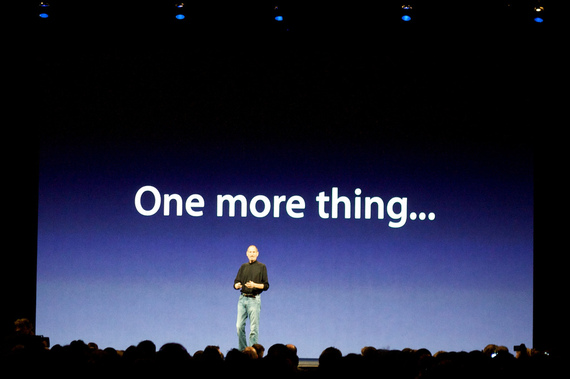 It was published in Harvard Business Review and has received quite a response, some of which surprises me because I guess what I thought was normal isn't so. For example, why is it so odd for a CEO to read and approve press releases? I'd rate communications up there alongside reading sales spreadsheets as a key responsibility of any successful company leader. Yet, it was so unusual to others that Business Insider ran it as a headline.

I've also received many requests for more learnings from my time on Apple's PR team. Rather than respond one-on-one, I thought I'd pay tribute to Steve Jobs and his famous keynote line "one more thing..." and offer up one or two more.

A big part of Apple's turnaround was the surprise factor at Apple launches. Just when you thought the show was over and that everything had been announced, Steve would come back to amaze you with one more announcement guaranteed to blow your mind. So how did we do this? A big part of Apple's culture was (and I assume, still is) respecting secrecy. I can only speak for myself, but I loved the company and the thought of giving any hint about an upcoming unannounced product or piece of news was simply not in my DNA.

Sometimes this meant nodding your head for hours during press briefings when reporters would berate you for not having a particular feature or not supporting some new technology. You knew these things would be addressed in an upcoming update and it was frustrating to listen to but you had to take it. The payoff would be in the launch, when invariably the company would address all these things plus some no-one had ever thought of, with its latest innovations.

You can benefit from this approach too by not pre-announcing news too far in advance. If you announce too early, every time there's a slip your credibility is affected. You're also effectively letting your competition in on your secret sauce. Usually, but not always, it's much better to announce things closer to when they ship or the news goes into effect.

Using PR agencies, or not!

As I said in the article, we were a small team and relentlessly focused on telling the story of how our innovative products were giving customers the power to unleash their creativity and change the world. So what PR agency did we use? Well, when I first joined Apple's product PR team we were using one of the big three. But with the company's culture of secrecy and the agency not being let in on upcoming announcements, they were often caught on the blackfoot. In successful client/agency relationships, agencies are the strategic partners who have a long term view of the company's vision and roadmap and help plot the course for how to get there. The agency did not have this with us and were not able to value add as much as they potentially could.

Our solution? We brought everything in-house. We hired a few more mid-level resources and did everything - planning, press release writing, event planning, product review programs, momentum programs...you name it...we did it all ourselves. And it worked better than it did before.

Am I suggesting not retaining an agency is the solution for you? No, but in Apple's case it was. I would suggest taking a good look and a hard think about where you are now and where you want to be in the future and question whether you are working with the right strategic partner. I'd also recommend you review "how" you work with an agency and get feedback from them on whether there's something you are not giving them that could help them be more effective.

So, thanks for taking time to read this piece and the original article on HBR. I'd love to hear how you think Apple has influenced the way the world does marketing and PR. What was different about their approach back in the Jobs era, or now, that gives you pause to think, or to exclaim "wow" multiple times? And how can others benefit from their approach?

I am available for comment on PR and communications related subjects and select speaking opportunities.